... and the Fantabulous Emancipation of One Harley Quinn 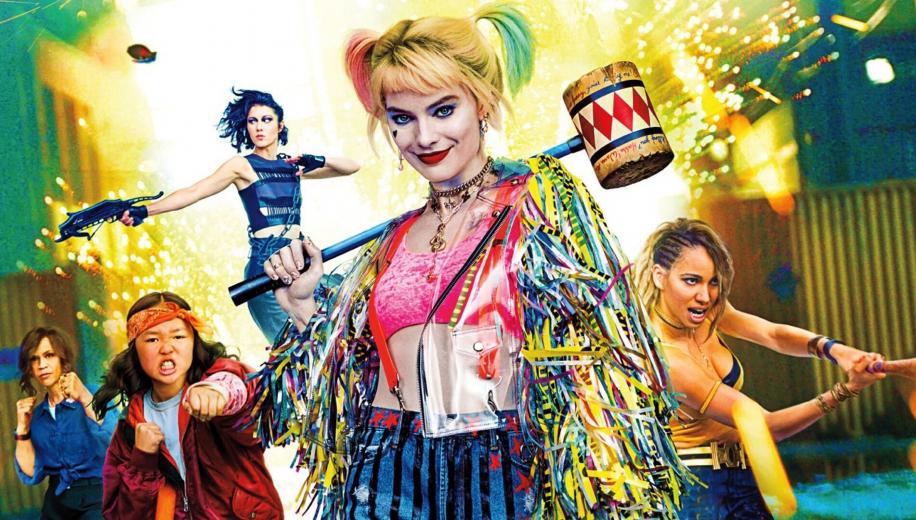 Suicide Squad turned out to be an unlikely unifier – it really brought people from across the aisle together in unison over how much they didn’t enjoy it. So Birds of Prey (and the Fantabulous Emancipation of One Harley Quinn), a spin-off from that profoundly un-loved film, was a bold concept from the start.

It stars and circles around Harley Quinn (Margot Robbie), who was in an abusive relationship with the Joker in Suicide Squad and here is an independent force to be reckoned with. Harley and the Joker have split up, inducing a rage in our antiheroine that causes her to drive a petrol tanker into a chemical plant, which unsurprisingly spills out a whole load of consequences that need to be cleaned up.

After a few run-ins and bust-ups, Harley cobbles together a motley crew of fierce women: there’s tough cop Renee Montoya (Rosie Perez), singing martial artist Dinah Lance (Jurnee Smollett-Bell), trickster pickpocket Cassandra Cain (Ella Jay Basco), and crossbow sharpshooter Helena Bertinelli (Mary Elizabeth Winstead). Not that it’s ever in doubt, but Birds of Prey is everything every superhero film thus far hasn’t been. It’s fun and colourful and silly and chaotic and, above all, about women.

The perfect antidote to male-orientated, dour, grim and bleak superhero films that take themselves too seriously

The overarching tone of the film is anarchy, which is represented both within characters’ actions and the jumpy nature of the narrative. The first half or so of the film is structured (loosely) with a non-linear plotline that introduces us to our ensemble of characters, and also sets out the film’s stakes.

Now that Harley is no longer allied with the Joker, all of Gotham City’s unsavoury characters have come out of the woodwork to enact revenge on Harley. Chief among them is rich kingpin Roman Sionis (Ewan McGregor), who is an unapologetically cartoonish gangster who demands an elusive diamond in exchange for sparing Harley’s life. Of course, it’s never that simple, and before long Harley and her co-conspirators find themselves up against every criminal in Gotham in a life-or-death battle for the bling.
﻿

﻿Director Cathy Yan imbues the film with chaos and disorder and nonsense in a way that always borders on the obscene but falls just enough on the charming side. The film’s crowning glory – besides emphatic and gleeful performances from Robbie and McGregor – are the various fight scenes, which will surely number amongst the year’s most innovative and beautiful. Each character displays a distinct fighting style that corroborates their backstory which, though a small and easily missed narrative detail, is one of the many ways the film demonstrates just how much thought has gone into every element.

That includes the script, penned by Christina Hodson, which weaves in references and stylistic quotations and nods to plenty of cinema’s greats (parallels with Sin City and Kill Bill are particularly striking). The script flits between cheeky voice-over and frenetic pacing, with the pitch-perfect fight scene set pieces and fantastically wacky characters all thrown in too.

Birds of Prey is everything every superhero film thus far hasn’t been. It’s fun and colourful and silly and chaotic and, above all, about women

For those of a weak disposition or those who like their women meek, their language clean and their eardrums untested, this is a largely unsettling and nausea-inducing flick. The jumps back and forth in time do their best to mask what is actually quite a threadbare storyline that’s quite simple. In fact, a few of the characters, if you look closely, aren’t really that well fleshed out – though you don’t really feel the need to look closely, because the film as a whole is so raucous and distracting and fun.

Robbie’s comic timing is fantastic, and is used to full effect here (some of the lines are pretty funny, but the whole film is carried by Robbie’s charisma). McGregor has a ball too as Sionis, navigating the chaotic and madcap world of the film by really leaning into it. Not that anyone’s phoning it in – actors, stunt coordinators, set designers and decorators, costume designers, make up artists and sound engineers alike have all turned the wacky dial up to 11, to great effect.

The perfect antidote to male-orientated, dour, grim and bleak superhero films that take themselves too seriously, Birds of Prey is fun, flirty, flashy and… well, fantabulous.