Will the circle be unbroken? 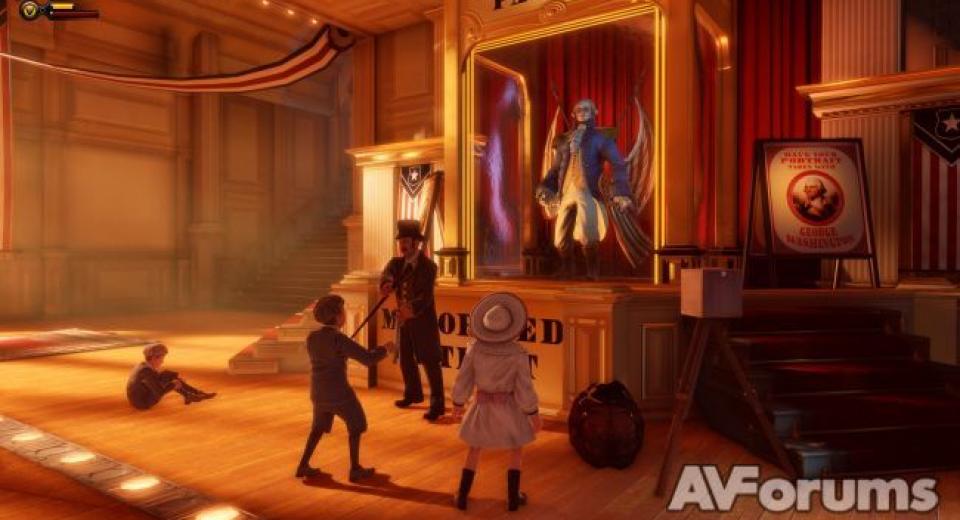 Like any good film, book or work of creativity, Bioshock Infinite leaves you - more than anything else - wanting to talk to anybody that’ll listen. Its climactic scenes made me jump up and babble at my partner for five minutes straight before I realised I was discussing riddles that only I could actually understand, and I suspect there will be many others doing the the same but with completely different readings of the conclusion. Most, if not all of them, will be valid interpretations of a plot that’s dense with mystery and yet beautifully coherent when the penny eventually drops, but worry not over spoilers; if the original Bioshock could be summed up in a single sentence then Infinite hikes as far in the opposite direction as possible, in one of many ways in which Irrational has trumped Andrew Ryan to bookend this hardware generation with an unmissable project.
Like its forebear, Bioshock Infinite is a science-fantasy first-person shooter with heavy narrative overtones. The year of 1912 and the floating city of Columbia act as hosts for this adventure, but unlike the underwater objectivist art deco-themed Rapture, this is a wood-and-brass pseudo-steampunk metropolis in its prime, soaring magnificently above the clouds in a haze of colour and sprinkled with the sights and sounds of a population filled with prosperity and festivity. Down-on-his-luck protagonist Booker Dewitt is driven to explore its streets, floating islands and interconnecting skylines on a somewhat nefarious mission to “find the girl” on behalf of a shady individual in return for wiping away his gambling debts, but soon becomes embroiled in a plot that reaches far beneath that veneer of wholesomeness into the murky foundations on which Columbia is built. As you might imagine from a Bioshock game, Infinite’s world is a physical embodiment of a single egotistical father figure, only this time our villain houses questionable moral, religious and racial ideologies to go along with his penchant for dubious philosophical leanings. To Irrational’s credit however, things are never quite what they seem in Columbia, and even the most obvious candidates for virtuous redemption are written in some interesting and frequently surprising directions. Yes there are plotlines, organisations, visual nods and character archetypes that are clearly recognisable from Bioshock, but they often play with expectations or operate in a fashion that’s open to interpretation. There are no sacred parts to their formula (despite it containing all the nuts and bolts of the original), and layer upon layer of mystery, second-guessing and staggering visual design make for an adventure that’ll live long in the memory.
Perhaps the greatest achievement of the lavish attention to detail afforded by its 5-year gestation is that the majority of Infinite’s design either serves to inform the player with subtle environmental storytelling or else directly affect gameplay without breaking the visual cohesion of its world. There’s a clear nod to Valve’s approach here, with the best elements of Half Life’s communicative level design taken to further extremes; almost every inch of Columbia’s streets are engineered in a fashion that communicates history and purpose, and there are a huge array of incidental set pieces that supplement exploration and serve no other purpose than to convince you this is an actual place, lived in by people. Whether it’s overhearing a conversation on the street, a period rendition of a song performed by a barbershop quartet, taking part in an impromptu guitar ballad or reading a bit of graffiti hidden in the depths of an alleyway, everything works in unison to bolster the atmosphere. And speaking further of Valve, when Booker eventually “finds the girl”, the enigmatic Elizabeth turns out to be a natural successor to Alyx Vance as the most useful and interesting sidekick in a first-person videogame. Her nuanced relationship with Booker is what drives the majority of Infinite’s narrative, and she’s a far cry from the damsel-in-distress that would have been an easy route to a boring conclusion for the majority of other shooters. Indeed, Elizabeth’s mysterious power to uncover ‘tears’ to another dimension makes her both a formidably powerful presence on the battlefield and an actively useful ally, whilst her childlike sense of wonderment at finally exploring Columbia allows the developer to draw a neat analogue to the player’s experience and reinforce the elements of the world they really want to highlight.
Of course, that good will would have crumbled if Elizabeth was to ever to get in the way or require an escort at any stage, but that scenario is entirely absent here. She’s ever-present but never a burden, often chirping up with interesting conversation as you wander the carefully-placed shops and houses. She finds items on her own, flips you coins, investigates objects, leans up against walls or sits down instead of pacing in a repetitive idle animation, and she’ll even run off in front if you’re heading in the right direction - negating the use of an objective arrow. Crucially, you never need to worry about her in combat, and I didn’t notice her sticking on the environment or any jarring animation during the entire experience. Maybe I got lucky, and I’m sure there’s an element of smoke and mirrors about her navigational prowess and ability to keep up with your every move, but frankly who cares when the illusion is this good. Both Booker and Elizabeth are lent considerable vocal talent alongside the excellent script and AI, and their dialogue feels natural. Amidst those quieter moments of exploration and exposition it’s often easy to forget that Infinite is actually a shooter by trade, and despite that preference for art winning out over technology, there’s a clear and positive progression here in terms of its nuts and bolts.
It is, on pretty much every level, a superior experience to that of the original and its outsourced sequel. The basic formula of plasmids on the left trigger (here called “vigors”, and topped up with “salts”) and weapons on the right trigger survives the transition intact, bolstered by an array of upgrades purchased from vending machines and perks assigned by wearing different pieces of clothing. Booker’s resultant combat style is highly customisable, and the basic template of clearing a room with magic and bullets before exploring its contents is familiar but welcome. The array of enemies takes on a similarly outlandish but altogether lighter tint to those found in Rapture, with motorised minigun-wielding patriots joining a cast that includes sword-wielding ethereal ravens, grenade-lobbing explosive experts, giant handymen and the usual gaggle of assault grunts, shotgun dudes and snipers. There are more, but they deserve to be met without any warning. Again, it’s the art and structure of Infinite’s level design that elevates it above standard fair. Multi-tiered arenas are frequently surrounded and woven through with magnetic skylines that can be used to quickly escape or boost to an advantageous position, adding a level of accessible depth and introducing a unique flow to the combat (to hop on you simply need to tap a button whilst highlighting any section, and the range is forgiving). Elizabeth’s mid-game ability to conjure weapons, turrets, defences and other bits of kit from selectable environmental “tears” also adds to that freestyle nature, although only one of them can be active at any time. When the skylines and tears are used in conjunction with a swathe of perks that might see your melee range boosted, damage multiplied with every successive kill or movement speed doubled when low on health, Infinite’s gameplay manages to conjure up some brutally efficient and organic combat, although it is worth nothing that it’s perfectly possible to simply run-and-gun your way through most fights on the default skill level. Bump up the difficulty and quickly adapting to your circumstances becomes both necessary and rewarding.

There’s plenty about Bioshock Infinite that we’ve not discussed, and with good reason. I could spend paragraphs explaining why the audio work and signature tune is some of the best work in any game to date, but there are tightly woven secrets within that deserve to be experienced first-hand. There are specific set-pieces that are amongst the best immediate payoffs I can remember, and there are yet more that snap into focus in such a brilliant fashion when the game ends that it practically demands you start playing again immediately. There’s not a single turret sequence, and practically every door in the game can be opened (and does so automatically). There’s the fact that it runs on the Unreal engine but looks about as far removed from the cookie-cutter FPS template as possible, and there are PC-specific DX11 effects that actually integrate convincingly with the environment rather than just highlighting the technology in a showy manner. The lighting effects, rather incredibly, trump everything else.
Bioshock Infinite is a game that makes you want to talk then, and it’s a game that makes you want to talk in hyperbolic terms couched in deep conversations with anybody else that’s finished the game. There’s a huge amount to be impressed with, and even though Columbia might lack the instant wow factor of Rapture and the scene-stealing twist that game will forever be remembered for, it’s a project that’s at once more refined and considerably broader in theme, with huge improvements to combat, storytelling and everything in-between. There were times when Booker and Elizabeth’s dialogue alone managed to give me the chills, and there were moments hidden away in secret rooms or on the Voxophone recordings littering the environment that I’ll remember long after the dust settles. It’s a glorious and fitting end to the hardware generation, and five years of development time with seemingly not a moment wasted.