Plenty to applaud, yet fully getting behind the characters remains elusive 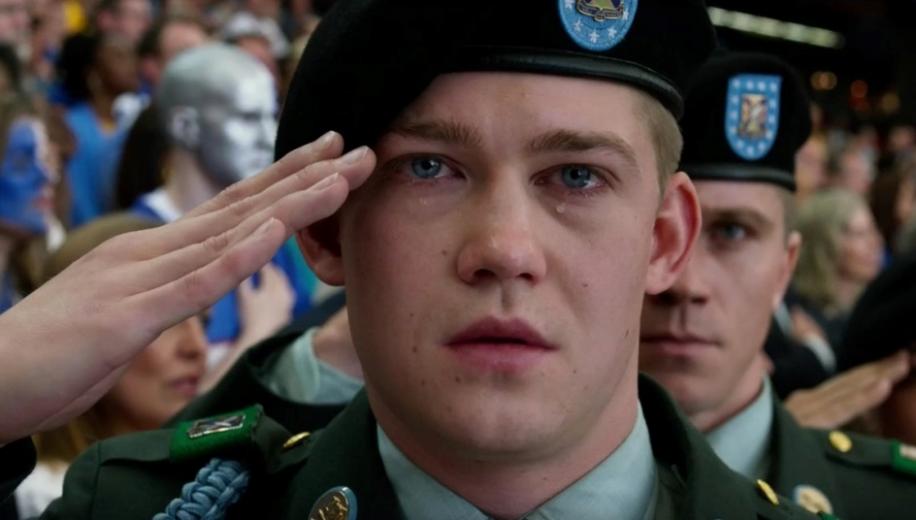 It's sort of weird, being honoured for the worst day of your life

Billy Lynn’s Long Halftime Walk is not a true story despite the look and feel of the piece. It is based on the 2012 novel (of the same name) by Ben Fountain and focuses on the titular character’s emotional wellbeing during a 2004 war support tour whereby he was hailed as a hero after being caught on film rescuing his sergeant during a desert shootout with insurgents. Ang Lee’s film pretty much follows the source material as we watch Billy, who is clearly suffering from Post-Traumatic Stress Disorder, wrestle with his emotions of loyalty towards his comrades, his family and himself all to the backdrop of an extravagant Superbowl halftime show; demonstrating the public’s perception of the war against the actual events as experienced by the 19 year old. Told in ‘real-time’ and ‘flashback’, Lee juxtaposes scenes to invest the audience into the characters as the truth of the story unfolds.
Cast in the titular role is Joe Alwyn, at the time just two days out of drama school and his youthful inexperience bring to life the eyes of the character who is too young to have suffered the events that befell him. It’s no exaggeration to say that Alwyn carries the film with his performance. Lee pioneered a new filming technique utilising all the latest technology available to enhance the dramatic aspect of the film (4K, 3D and 120 fps) which gives a ‘hyper-real’ edge to the film, beyond that of its peers. Essentially it allows a glimpse into the soul of the characters by placing the audience next to the characters as the drama unfolds due to the realistic nature of the film. So that the sets, performances and camera movements all join to form a cohesive whole that is totally unparalleled; as such Billy’s journey becomes our journey with all the emotional baggage it contains. At a native resolution of 4K and at 60p (a first for the format) this is certainly a unique viewing experience. The image on show is nothing short of remarkable, as it should be, this being the pinnacle of current home cinema technology, with everything gelling together to form something truly special. Detail is out of this world, nothing is lost, everything is pin sharp from the tears streaming down Billy’s face in the halftime show, to the dust on his desert fatigues during the battle scenes; to say it’s like being there is no hyperbole – the way Lee moves his camera, the framing of the shots, the POV indications, you are there involved, immersed and engaged with the picture. Every skin defect is visible, every stitch in clothing is there, the grass of the playing field, the scaffolding of the stadium, the cracks in the walls, the bark of the trees, the dents in the vehicles there is simply nothing that is left for the imagination.


60 fps and native 4K is certainly a unique viewing experience

The higher dynamic range comes into play to add further realism to the image, blacks add the depth, whites bring it to the fore, the wider colour space allows every natural range to be visible, from the greens of the dress uniforms to the blues of the cheerleaders' tops. The spectacular halftime show (which is seen from the perspective of the participants) is stunning, the fireworks pierce the blackness with no hint of wash, bleed, separation or smear; the lights are crisp and penetrating and those illuminated appear stark. Then we come to the frame rate which adds another sense of realism to the movement that, again, places you next to those on screen; the camera flows and the motion of those on screen is real, and in every respect this is a stunning experience.

So here’s where we enter preference. Everything above is true; you have never seen anything quite like it – it is a unique visual experience. And I simply did not like it. It was too real, too visually stimulating; there was that ‘it looks like video’ nagging element, and the way Lee frames at times seemed comical, such as face on to the character as they talk to the screen; the whole thing, to me, was distracting – it doesn’t look like film. And that is the crux of the matter as far as I am concerned; I failed to engage with the story because I couldn’t get past the image. The 1080p Blu-ray, included in the set, has a reference image, through and through, as whilst it doesn’t have any of the bells and whistles above, what it does have is that film like experience enabling me to forget the visuals and engage with the story.

There is no denying that the 4K UHD image as presented is a stunning visual feast, and it truly deserves to be seen for what can be achieved; however whether or not, as an individual, you can connect with it emotionally to draw you into the story, that is another question. Simon Crust reviews the Dolby TrueHD track using standard 5.1 system – Just as the 4K HDR image is a picture of realism, so too is this track which uses the surrounds to fill the room with ambient sounds, but is not afraid to be silent in more intimate moments. The major effects spectacular is the halftime show itself where band, marching, fireworks, crowd and dialogue compete in an ever increasing layer of prominence, so that you feel you are right there standing alongside the squaddies. There is a particularly good 360 degree pan around the room, following the camera as is circles around Billy as he stands front and centre of the stage; a remarkably constructed scene which showcases his disorientation, determination and dedication while fighting off depression, with a sound mix that simply adds everything to the scene. Less dramatic moments, such as dinner at his parents, or reflecting with his sergeant are no less ambient with simple household or desert effect adding to the realism of the scene. The short battle sequence is very nicely done with the action being all directional depending on the camera position. Bass is tight and controlled, though LF effects are somewhat limited. Dialogue is clear and precise and sounds very natural, while the score is very well layered.

Steve Withers reviewed the Dolby Atmos soundtrack on a 7.2.4-channel setup – Ang Lee set out to make a very different kind of film with Billy Lynn's Long Halftime Walk and since sound is 50% of the movie experience, it stands to reason that he would employ all the latest technology in this aspect of the production as well. So the Ultra HD Blu-ray boasts a superb Dolby Atmos soundtrack that, whilst slow to get going, really delivers where it matters and is, at times, the most directional mix we have heard since Gravity. The obvious highlights from an audio perspective are the halftime show and the firefight, both of which are delivered with exceptional realism. The sound designers make full use of the multi-dimensional aspects of the format to immerse the viewer in the environments and action, often steering effects based upon the character's POV or the movement on screen. Dialogue is always clear and focused, the score well mixed and the LFE channel used to add impact where it's needed. The Dolby Atmos soundtrack for Billy Lynn's Long Halftime Walk is the final aspect to a film that's nothing if not a technological tour-de-force. Disc 1 – 4K UHD 60fps Blu-ray
Technology as Art: Changing the Language of Cinema – five minute feature (in 4K and HDR) that discusses the film’s use of the latest technology as a dramatic narrative; a fairly biased argument is presented, but still didn’t convince me.
Stills – Cast and crew images
Moments – Excerpts from the film under named titles

Disc 3 – 1080 Blu-ray
Deleted Scenes – Roughly ten minutes of removed scenes, seven in total adding the odd character beat but nothing that is missed.
Into Battle and Onto the Field: Stepping Inside Billy Lynn's Long Halftime Walk – All-encompassing making of feature that, at nine minutes, manages to pack a whole lot in: themes, original novel and how that translates to film, the technical advancement used in making the film, editing, design, production and more.
Assembling a Cast – Just over eleven minutes looking at the main cast members, what was being looked for and the qualities of the actors chosen.
Recreating the Halftime Show – Six minute feature that details the lengths that the film went to in making the only true element of the movie: the 2004 old Texas Stadium halftime show.
The Brotherhood of Combat – Four minutes spent with the actors as they prepared themselves physically and mentally during the military training required for the film. Whether or not Billy Lynn’s Long Halftime Walk is actually enhanced by the technological breakthroughs that have allowed its filming style is largely up to the individual. The story, emotionally charged as it is, and as well acted as it is, doesn’t really have that engrossing characteristic that defines a classic. There is plenty to applaud and yet fully getting behind the characters remains elusive, and, as such, total engagement is lost. In the end, I suspect, the film will probably best be remembered for its technological achievements rather than its subject matter.


It will probably be best remembered for its technological achievements

As a 4K Ultra HD Blu-ray set, the disc from Sony is something special containing as it does three versions of the film. The 4K UHD disc, the reason for the review, is presented at 60 fps and is quite an astonishing picture in terms of realism, it really is that good – however some may find that a distraction from the film. The 1080p Blu-ray is a reference picture and though it does not contain the depth of colour or dynamic range of the UHD, it is at 24 fps and thus more ‘film like’. There is also the 3D presentation of the film. The Dolby Atmos soundtrack is another terrific piece of design, being immersive and engaging, while the extras, while short, do contain some decent enough information about the production.