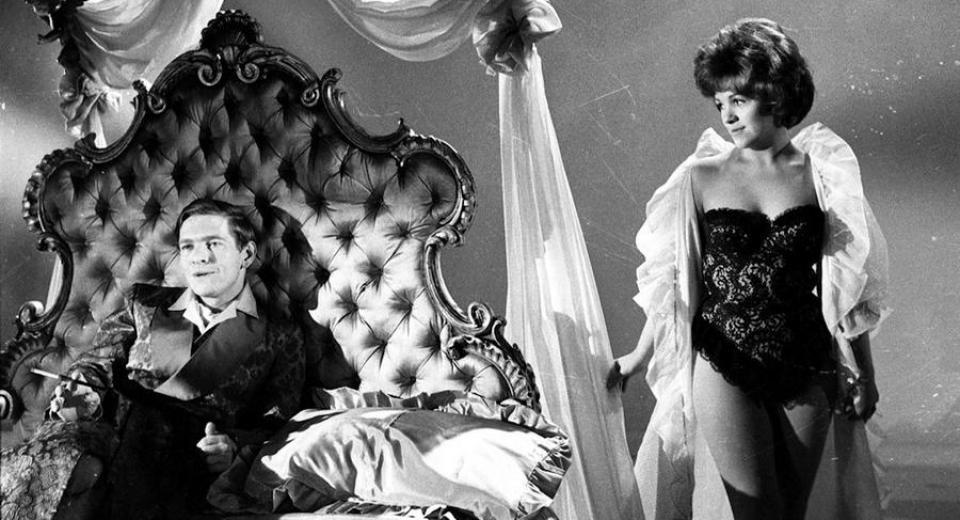 The 1960s was a real breeding ground for British New Wave, dramas and while Billy Liar is more of a black comedy, it does just sneak into this genre. Released to celebrate the 50th anniversary of the cinematic release, this is a classic movie in many respects.

Based on a novel by Keith Waterhouse, it tells the story of a lay about day dreamer – William Fisher, who spends half of his time in his own fantasy world. Acknowledged as one of the classic Brit movies, it is for the most part, a gentle, unassuming piece of cinematic theatre. Indeed, the film was made following the success of the West End play, with Tom Courtney moving from his role as understudy on stage to star as William in the film. He is joined by Helen Fraser as Barbara, Julie Christie as Liz and Gwendolyn Watts as Rita. Billy has love interests with all three girls, but none of them seem to suit or satisfy him. His friend and workmate is Arthur Crabtree ably played by Rodney Bewes. They are employed as clerks in an undertakers, with both sharing dreams of something greater.

So that is pretty much the set up. Filmed in Bradford, it could be any town or city in the UK really. The 1960s were a time of ripping down and re-building across the country, with many bomb sites still to be re-developed, and these form the backdrop to much of the movie. These so called “Kitchen Sink” dramas were seen as a follow on or even a response to the French New Wave movies that were popular from the 1950’s to the late 1960s. In Britain, the focus was on showing the grimier, seedier sides of life, with working class families taking a more central role than had been the fashion in earlier, aspirational works, where the middle class reigned supreme.

The opening scenes of the movie paint a picture of working class domestic bliss. Neat, tidy houses and flats, housewives hearing their requests on the radio and life carrying on as usual. Behind closed doors, things are not quite so green and pleasant. Billy is ignoring the calls of his mother and is still in bed, even though it is more than half an hour after he should have been at work. Lying serenely, Billy is day dreaming about the fantasy kingdom of Ambrosia. In his made up world, he is the leader of its victorious army, adored by the crowds and cheering him on through the streets. Both his parents and his aged grandmother who also shares the family home berate Billy for his attitude, his laziness and most importantly the way his fantasies spill over into real life, leading to him telling outright lies – far too many for a grown man.

In the undertaker’s office, things are little better. Billy is an educated man, so has been given responsibility within the office for the petty cash and also sending a pile of calendars to potential customers. A shame then, that he has been dipping his fingers into the till and has hidden the calendars in his wardrobe at home, after nicking the postage money. Leonard Rossiter is the penny pinching, hard-nosed boss and it has to be said, is perfectly suited to the role of undertaker, being both obsequious and mildly unpleasant.

Billy’s lies do not stop with his family and workplace. He is also dating and engaged to two women. Not only that, they are sharing the same engagement ring! Rita is his original girl, a bleach blond waitress in a local café. She thinks Billy has taken the ring back to have a stone re-set, but the truth is his new love Barbara now has the ring, although her high morals have prevented him getting so much as a passionate kiss, let alone anything more, and so he keeps on Rita for recreational purposes. The third girl in the tryst is Liz. She is everything Billy aspires to be, bright, sociable, well liked and something of a free spirit, not tied to her family or home town in the same way Billy feels he is. Liz and indeed, the other girls all have a soft spot for Billy, there must be something to keep them coming back.

Billy is keen to leave his humdrum job and writes to well-known comedian Danny Boon (Leslie Randall) with some scripts he has written. When Boon responds in a non-committal way, Billy’s imagination takes this as a firm job offer and he starts to tell everyone he is leaving Bradford for the bright lights of London. When he eventually gets to meet Boon, the job evaporates, so now he has to face the reality of no job offer and possible criminal action over his petty pilfering at his current employ. His troubles do not stop there, as his two fiancés have just found out about each other and his whole tangled life is starting to unravel. Not only that, but things at home are not great, with his parents squabbling with each other and his grandmother falling ill, Billy has some hard choices to make. Liz invites him down to London on the midnight train, but can he do it? Can he cut the apron strings and move out of his home? Can he leave his fantasy world of Ambrosia behind him? Only time will tell.

The recurring daydreams into Billy’s fantasy world provide much of the humour in the film. From his vision of himself as conquering tank commander to a painted marionette on horseback, there is no reality in his visions, just the need to be adored and loved. He has a few naughty moments as well, fantasising about seducing Barbara, something she will not entertain until they are decently married.

This movie is funny and touching, and nowhere near as bleak as some of its contemporaries. Tom Courtney is entirely believable as the immature womanizer, and there is not a poor performance amongst the supporting cast. Kitchen Sink drama may not be your thing, but this has just enough humour to take the edge off the everyday grind. This might not be to everyone’s taste, but it still fine British Cinema.