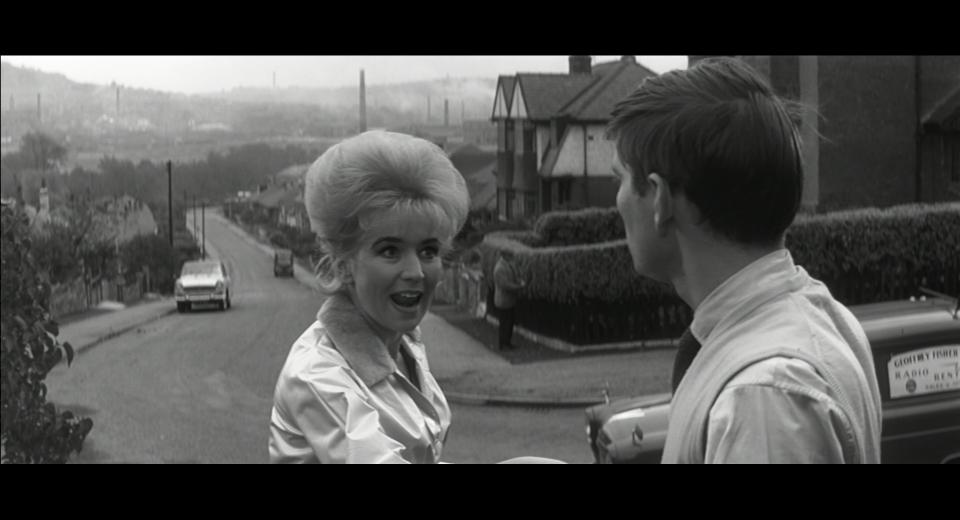 Studiocanal have done a fine job with restoring the black and white print to a decent 2.35:1 AVC Mpeg transfer. A quick look at the trailer bundled in with the extras shows how much there was to do, with black level restored, as well as all the scratches and dust erased. There is nothing in the way of edge enhancement or digital noise present, but it does look a little soft in comparison to some. The only issue therefore is that the original film was not the best, with limited dynamic range robbing us of really inky blacks or high contrast scenes. It tends to be quite unsubtle shades of grey with not a lot of detail either. It is nicely stabilised but is hardly cutting edge.

The location shooting around Bradford melds seamlessly with the Pinewood studio scenes and there is plenty of attention to detail in the set dressing to give an authentic, gritty view of domestic living of the time. A shame then, that the original negative was not up to much. The DTS-HD MA 2.0 stream has been equalised and cleaned up to give a commendably low noise floor from the original optical mono track. The speech for the main part is extremely clear and well balanced, but the music sounds very telephonic and flat. Even for the age of the movie, this is quite poor, feeling ten years older than it really is. There is no bass to speak of, and this affects the music in particular.

The music is also a little older than the setting, with dance hall favourites winning out over the rock and roll tracks of the era. This really was a transitional time, with the older generation clinging grimly on to their war time big band and the new generation embracing something a little more modern. Whatever the reason, the soundtrack feels very dated and does the movie no favours. The extras here are quite expansive for an early movie. As well as an original trailer and some artfully shot production stills, we get interviews with stars of the movie Tom Courtney and Helen Fraser, as well as current British director Richard Ayoade and Saint Etienne’s Bob Stanley. Both of the latter talk about the impact and influence the whole portfolio of Waterhouse’s work has had both on them and also the cultural and arts circles. The original stars reminisce about making the movie and working with one another, as well as director John Schlesinger. The last short (they are all about ten minutes long) is with British Library Curator Zoe Wilcox. Again, this is quite interesting and provides more background to the genre and this film specifically as she explores Waterhouse’s archive, that was lodged with the British Library shortly after his death. It is not all good news though, as the audio is awful throughout. Captured as a single channel on the camera, that is exactly as it is presented. The interviewee is panned fully left, but is generally quite clear – apart from the first minute of Ayoade’s interview where things get a bit muffled, but the right speaker has all the clicks, thumps and creaks from the camera, as well as ambient noise from the room. This has obviously escaped mastering in the mix down and is a real shame.

Language support is minimal – just English subtitles, but the menus work well and the disc loads with the minimum of fuss.

Kitchen sink drama might make you think of Coronation Street, but this movie is much wittier and intelligent than any mere soap can manage. The standard of acting is superb and this makes for a gritty and in some ways realistic setting. Fifty years on, this film would make for a good re-make candidate. I can just see this with a bigger budget making the fantasy scenes more impressive while the setting and dialogue could easily be updated.

Technically this film is feeling its age more than most. It looks and sounds a generation earlier than 1963, which is a shame. It is not an issue with the transfer, just the limitations of the original media. The audio issues with the extras cannot go unmentioned either. All in all, a great film with a borderline transfer but still worth watching.