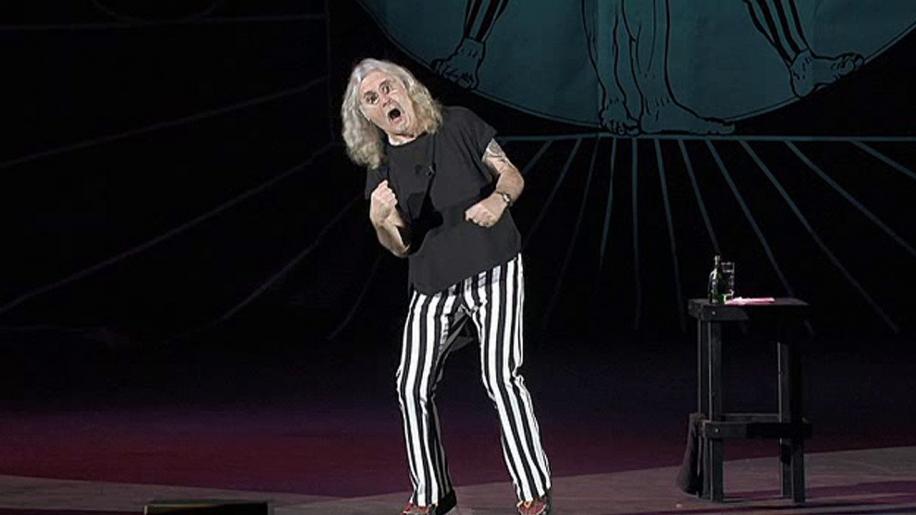 As we hurtle headlong towards Christmas, isn’t it strange how various celebrities choose this time of year to launch new books, CDs and DVDs? As the tinsel, glitter and fake Christmas trees start to appear in the shops, I normally look forward with fragrant anticipation to the latest offering from one of Scotland’s favourite sons, a certain William Connolly. I’ve enjoyed his anarchic ravings and ramblings since he first came to the public attention in the mid – seventies although I’d been aware of him earlier on as he used to tour the folk clubs of Scotland with his pal Gerry Rafferty as the Humblebums. Year on year he grew in popularity with his one man stand up act that tackled many subjects frowned upon by the religious fraternity, but caused much mirth among his audience. Many people claimed not to like his material as he made frequent use of the ‘language of the street’, at which those of us who began our working lives in an engineering environment didn’t bat an eyelid. I always imagined those who didn’t find him funny to be little old ladies with a blue rinse in twin set and pearls.

So now the wild man of comedy is launching a full frontal assault on the UK Blu-ray market with ‘Billy Connolly-Live in London 2010’, which was filmed at the Hammersmith Apollo in January of this year when the rest of the country was still under about a foot of snow. I’ve laughed out loud at every DVD he’s released over the years and have enjoyed his World Tour of Scotland, New Zealand as well as his Arctic documentary TV series. Billy Connolly’s great strength was always in his ability to observe things that happened around him as he grew up in the Glasgow area and worked in the ship building industry on the river Clyde. He was always able to point out the funny side of life, in the kind of language that lent his stories an air of authenticity. His tales always had a freshness about them, but they contained elements with which the audience could relate. As success drew him to America, his surroundings changed and his pals were no longer the genuinely funny welders and riveters of the Govan shipyards, but movie stars and celebrities who are removed from the real world and live behind security gates and fences. The source of his material was gone.

Now, if you watch every VHS or DVD someone has released over 30 years you’ll eventually reach a point where that person starts to repeat themselves. Nobody in the world has so much new material that they can avoid this happening – and sadly Billy is no exception. There were times during the 2010 show where I thought that I’d heard it all before and disappointment set in, which saddened me as my expectations of the Big Yin were so high. Like many comedians, he’s gone green and is heavily into recycling. During those recycled moments, it fell to his delivery to make the stories funny but he just seemed to spend an awful lot of time laughing at his own jokes.
The audience didn’t appear to mind and joined in by cheering every time he mentioned a place name from which some of them came. Apparently there were even people in the hall from Peru.

Without revealing too much detail, his material on the 2010 show covered complimenting the house on being a ‘decent audience’ together with his reflections upon how audiences change over time. His irritation with GPS systems will strike a chord with anyone who’s had the misfortune to use a Satnav in a city centre. He strikes a blow against the mis-naming of the glove compartment in a car. We’re introduced to a previously unheard of group of people called the Wankias – which is really a gift to someone like Billy Connolly. He regales us with his experiences of filming in the Arctic and we hear of his plan to improve undersea navigation in submarines for under £1000. Moving on to more risqué territory, he tackles lesbiations – which I won’t expand upon here. We hear how a tattoo can help you avoid being ‘beige’. A couple of old but funny stories involving Dwarfs and storms round off the 85 minute show.

He’s generally entertaining enough although one particular moment left a sour taste in the mouth. When someone in the front row stupidly interrupted him, he told them irascibly to “Shut the f*** up! I’m doing my act”. It then took a while for him to come up with the Heckler crushing line about when the lights go out, it’s his turn to talk. The old Billy would have gone straight to that line in a flash or used one like “I saw you on the Telly last night – interference!” While the interrupter should really have had more sense, Billy appeared genuinely irritated and instead of using humour, lashed out verbally at someone (a customer) who had paid a lot of money to be there. Nobody is so big that they can afford to do that.

Some of his previous shows have genuinely left me with aching ribs, a sore face and tears running down my cheeks due to laughing so hard. The 2010 gig raised a smile, the odd chortle and that was it. This is like Billy Connolly Lite and not vintage Big Yin.
Okay, so you could defend it by saying that the guy’s of pensionable age – all the same he’d probably punch someone’s head in for attempting to sympathise with him in this way, but this isn’t the same man who used to rage against the ridiculousness of life. This is an ever so slightly more mellow person. Someone who has had the rough edges knocked off him by life, who has married (the lovely Pamela), had children and is now a Grandfather. He doesn’t seem to have that slightly dangerous edge any longer.
Is this really the same guy who appeared on the Parkinson show with Rod Hull and Emu and when the Emu looked as if it was considering pecking him, the Glasgow hard man said, “See you burd, you touch me and I’ll break your neck and his arm.”
Having said that, I’ll probably now live in fear of the phone ringing for a while.

At the end of the day, it’s all a matter of expectations. When an entertainer has been so incredibly funny over the years, you want each show to be better than the last and when that doesn’t happen, it’s very hard not to feel like a kid who’s had his lollipop nicked. I felt that with the 2010 show, Billy Connolly was resting on his laurels. The disc should have come with a sticker on it that said 'Contains at least 30% new material'. I know he’s better than this. Get back in touch with your roots Billy, when you were hungry you were at your funniest. We don’t want to hear people say that you’re past it. There may be snow on top, but there’s still fire in the belly. Stoke that fire, don’t let it fizzle out! Find some new material.