Acceptable in the 80s 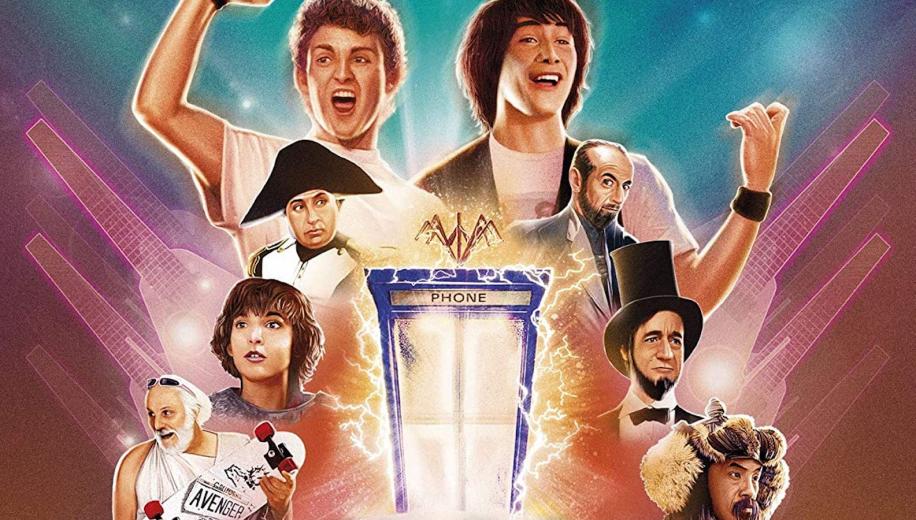 Back in the eighties, Bill S. Preston Esq, and Ted "Theodore" Logan introduced a whole generation of teen dudes to some bodacious surfer/stoner language, playing out a kind-of family-friendly, watered-down Dumb and Dumber, and catapulting one of its stars into the limelight. Both it and its sequel were popular enough to do decent enough Box Office at the time, and engage their audience at a very light comedy level, and few could have ever predicted that 2020 would see a threequel released almost 30 years since the last movie.

The plot was blisteringly simple: Bill and Ted are two wasters about to flunk history - and thus High School - who are gifted a last minute reprieve when a man in a time-travelling phone-box arrives from the future, gives them a glimpse of the year 2688, when they are both celebrated Gods, and offers them the opportunity to travel back in time and collect icons from the ages so that they can pass their last history paper.

An extended montage, which seems distinctly dated in 2020, stretching a flimsy idea over a surprisingly long 88 minute duration

Bill & Ted has painfully little purpose beyond the bare essentials - our hapless duo just run around in the past bumping into key historical figures, saying a couple of stupid things, and then kidnapping them to take them back to their 80s present. They grab up Billy the Kid, Socrates, Beethoven, Joan of Arc, Freud and Genghis Khan - or at least Night at the Museum-style caricatures of them - who are all thoroughly confused by the situation, but surprisingly on-board with the road-trip, which makes for brief, lightly funny, silliness when they hit their first Californian mall, but only really affords genuine laughs from a side-story involving Napoleon - their first catch, who they leave in 80s San Dimas whilst they trip around the past(s) to collect the rest - who is played as basically a hilariously over-the-top man-child, and who gets up to a whole bunch of silliness which wouldn't really be out of place in a Mr. Bean sketch.

Conversely, Bill & Ted themselves aren't up to a great deal at all, with eloquently dumb personalities that hardly prove particularly endearing (you can see why Reeves only found success through arming his Ted persona for Point Break). Of course it always remains the right side of offensive. But unfortunately that largely sums up the entire 'adventure': harmless; an extended montage, which seems distinctly dated in 2020, stretching a flimsy idea over a surprisingly long 88 minute duration, and only remaining lightly engaging for some of the time. It certainly will be interesting to see whether this kind of frivolity passes muster for modern audiences with the upcoming sequel, because without the nostalgia factor, it's a lightly amusing, mildly diverting outing at best.

Studiocanal's 2019 roster of native 4K restorations boasted The Deer Hunter 4K, Apocalypse Now 4K, Don't Look Now 4K, Angel Heart 4K, and even the Rambo Trilogy 4K, Cliffhanger 4K, Lock Up 4K and Red Heat 4K, with the year capped off by Leon 4K. 2020 has been quieter, with, up until recently, just the 4K set of Elephant Man, although the recent Flash Gordon 4K proved more than worth the wait. Now, in a race through the second half of the year Bill & Ted's Excellent Adventure drops. Studiocanal have, almost without exception, delivered these classics and cult classics in without a doubt the best visual shape they've ever been in, throwing Dolby Vision in for good measure to help these be defining video presentations. Whilst a little lower key than, say, Flash Gordon, Bill & Ted's Excellent Adventure still doesn't buck the trend.

Detail is excellent. Sure there's some inherent softness in the style and limited budget of the production, but they've managed to pull a pleasing amount of nuance and texture out of the print, delivering native 4K with aplomb for this time travelling duo. Initially there's a fair amount of burnt-in / superimposed titling, and you can immediately see the difference between these hard-to-clean shots and the very subsequent shots that don't have the fixed subtitling. More an example of just how good the film now looks, than a criticism, these are brief moments where you can see the work put into this presentation. It's not perfect, occasionally Dolby Vision does strike up a bit of a noisy buzz (c.f. the skyline at the beach in Angel Heart) and that can be seen in a few shots here, but they're relatively fleeting moments which don't significantly affect your enjoyment of the movie.

Of course, HDR and WCG make all the difference, and here Dolby Vision too, and Bill & Ted's Excellent Adventure, whilst hardly as visually opulent as some of the other titles given the treatment on 4K, definitely enjoys some moments of glory. The shop signs shine with neon intensity, the future tones are rendered with depth and vibrance, and sparks of primaries engage well, whilst the largely period sequences - as comparatively bland as they might well be - are still given a natural, organic look befitting of the style, backed up by solid black levels. Laden with dour pastels and bleached tones (and some truly awful effects), it's not an eye-popping visually stunning feature, but Studiocanal still work their wonders with the limited material.

Ok let's get this out of the way - Studiocanal's Bill & Ted's Excellent Adventure 4K disc doesn't have Atmos. Hell, it doesn't even have a 5.1 track. But the reality is that this is hardly an egregious failure on their part, as the film only ever enjoyed a native 2-channel mix, and that's what you get here, in glorious lossless.

Dialogue comes across clearly and coherently throughout, effects - nominal thought they largely are, with a few Back to the Future-style time-travelling buzzes, a couple of twangy gunshots, the echoey bustle of a bowling alley and the splashing, screaming craziness of a water park - get decent coverage, and the score gives it that rock edge, particularly with their imaginary air-guitar frivolity. It's a solid, original score, and whilst it's not going to blow you away Atmos-style, that was really never the intention behind the sound design for the movie in the first place.
﻿

Studiocanal's 4K Blu-ray release of Bill & Ted's Excellent Adventure enjoys a whole slew of extra features, however only a couple of Audio Commentaries make it over to the 4K disc proper.

A whole slew of extra features

The accompanying Blu-ray houses the rest of the background material, including a fun retrospective piece, a look behind the score, the spin-off animated series, the casting, the script, and the characters, with a bit of promo material - stills and artwork, as well as radio spots - to round out the disc and package.

There's a whole generation out there who grew up with Bill & Ted at just the right time in their lives, and so it's understandable that it might have grown something of a cult classic status - indeed nostalgia is such that you can almost understand why we're getting a threequel after a whopping thirty year interval. In the cold, hard, light of day, however, Bill & Ted is pretty flimsy stuff, a product of its time that hasn't dated well at all, and has little memorable about it beyond a couple of random lines that have entered pop culture. It's harmless, for sure, even if that is somewhat damning it with faint praise.

Studiocanal pull off another impressive release with Bill & Ted's 4K disc, delivering organic native 4K, with Dolby Vision for good measure, and the original 2-channel audio, as well as a decent selection of extra features. Fans should certainly consider it a tremendous package.