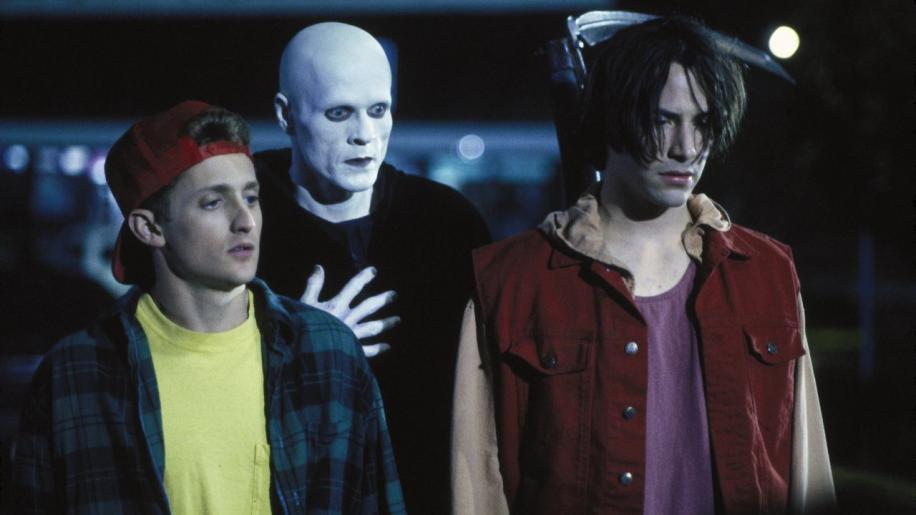 What do these words have in common? Prior to 1989 not much, but after the release of Bill and Ted's Excellent Adventure they became common language. Before the Turtles, before Wayne, Bill and Ted altered the dialect of the world, well, a small proportion of it anyway.

Herek's cult hit propelled its two relatively unknown leads, Alex Winter (Bill) and Keanu Reeves (Ted) into stardom. Winter, perhaps realising his cult icon status left the limelight for a career behind the camera, Reeves however continued acting and has had a few hits on his hands. However, be it Harker, Traven, Lomax, Neo or Constantine, I still expect him to say “Whoa, Dude”.

Excellent Adventure follows a very basic plot. Bill and Ted, together are Wyld Stallions; rock-star wannabes, content with filming themselves for future generations they have yet to actually learn to play their instruments. Added to this fact, they are both flunking History, if they fail to gain an A+ in the aural report they will fail. This has dire consequences for the duo as Ted's father, a police chief, will pack him off to military school, effectively ending the pair's friendship. However, Rufus, a traveller from the future, needs the pair to continue to remain together as their music will eventually unite not only the world, but also alien planets too. Thus, Rufus leaves the boys his time machine, a modern day telephone box, in what, I hope, was a nod to Doctor Who, so that they can pass their report and save the future. What follows is a comical adventure through the ages as the pair collects various historical figures to give presentations at the exam. The formula was an instant success and not surprisingly spawned a sequel Bill and Ted's Bogus Journey.

Released two years later Bill and Ted's Bogus Journey was an altogether darker affair. The future is far from set; Chuck De Nomolos wants to eradicate Bill and Ted's existence so that the future can belong to him and his ideas. To realise his goals he created two robot clones of Bill and Ted, then sends them back through time to sabotage the Battle of the Bands concert at which Wyld Stallions will emerge triumphant. The Evil pair proceeds to then kill Bill and Ted and commence destruction of their lives. Meanwhile, as spirits, Bill and Ted try to contact the living while trying to escape from Death, but in doing so unwittingly get sent to Hell where they face their worst nightmares. In order to escape they agree to play a game with Death the stakes of which are life or eternal damnation. It appears that Death is not the master tactician of Bergman's vision and fails at all the games thus granting life back to Bill and Ted; who then ask God for help in combating their Evil doppelgangers. Paired with an alien called Station, Bill, Ted and Death then return to Earth where Station builds two good robots and the five reach the Concert in time to do battle and preserve the future.

Both the films run with the same sort of formula; outlandish plot, unconcerned with contrivances, funny and endearing lead characters and a feel good ending. Even though they capture a moment in time there is a timeless quality of the characters that appeals even to this day. As idiotic and harmless as they both are there are one or two points of interest. First the time travel aspect, I won't go into the arguments of paradoxical travel, multiple universes etc. because if you are interested in such things this