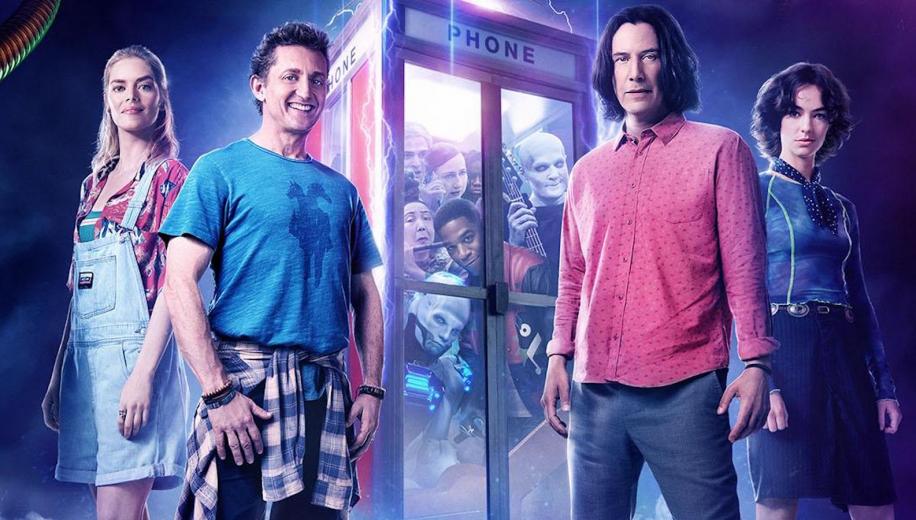 Thirty years later and Bill & Ted are back to save the world with rock, although long term franchise fans will need some hardcore rose-tinted specs to view this as any kind of future-classic-in-the-making.

1989's Bill & Ted's Excellent Adventure was an unexpected hit; a harmless, hapless romp around time with a young Keanu Reeves and Alex Winter enjoying their goofy eloquent Beavis-and-Butthead-lite roles pre-stardom. Its 1991 sequel was much more imaginative, the Back to the Future Part II / Terminator 2: Judgement Day of the series, with the duo's dalliances with William Sadler's Death an absolute highlight, repurposing ideas from The Seventh Seal to deliciously comedic effect. Everything fans could have possibly hoped for from a sequel in this series, there were no immediate plans for a third feature, but for more than a decade - in the age of (soft) reboots to old franchises - a belated sequel has been slowly gaining momentum, significantly propelled no doubt thanks to a Reeves' own post-John Wick comeback trajectory.

Fans have been impressively responsive to the tease of a third feature, and Face the Music rewards their enduring patience with a well-meaning, effects-laden (this is the digital age after all) romp around time and space, bringing back Reeves and Winter (who has hardly done a thing in the last thirty years) for one last reunion tour. Seen through the rose-tinted lens of fond memories, it's just about all anybody could have hoped for after three long decades, with some not insignificant socio-political changes to the cultural landscape definitely informing a story that appears possibly a smidge too interested in ticking boxes when really what everybody is waiting for is Sadler's Death to come back.

For an 80 minute movie, Bill & Ted Face the Music has a surprisingly number of wasted moments

Bill and Ted are struggling with middle-age and the overwhelming realisation that they may not actually be the ones who will save the universe with their music, but when pulled into the future and informed that they have mere hours to play a prophesied song to unite the world - otherwise alll of time and space will collapse in on itself - they decide that there is only one option: grab a phonebox and go to the future to steal the song from their future selves, after they've written it. In the meantime, their daughters Billie and Thea decide that they will need a back up plan, and go on their own Excellent Adventure to pull in musical masters from across the ages in order to help their fathers pull off a Hail Mary track.

In the cold, hard light of day, sober and distant enough from fond (if misplaced) memories of the first film, and more justified memories of the second, superior outing, even hardcore fans will find it hard to slot this third entry in alongside the former cult classics. It's an uneven affair, distractingly clean in its digital style, at once feeling like some kind of weird modern TV pilot, whilst also disturbingly discarding everything that had gone before it. It's more than a little worrying that the plot and sentiment of Face the Music has more in common with Terminator: Dark Fate - in more ways than one - than it does to the successful formula of its last two time-travelling romps, feeling a little like it has to rob the first two films of their satisfactory conclusions in order to fashion a bigger, and more appropriate ending. It's unnecessary plotting, and probably wouldn't have passed muster had it been done more subtly, but the fact that Bill & Ted are made to feel increasingly irrelevant even in their own franchise will leave this little more than a third wheel when counterpointed with the first two.

Moving past the compromises and questionable decisions, the disjointed plotting and at times awkward casting (you can't redress the balance from the male-centric futures depicted in the 80s/90s predecessors by just positing a future where everybody important is female; one day that's going to be just as outdated a view), and the potential for sidelining the headliners of the show in their very own movie, Face the Music does find some kind of groove eventually, garnering a not insubstantial amount of goodwill from its played-for-comedy jumps into the future, where our hapless heroes struggle to find a single future incarnation of themselves to help them in the present.

But until they hit Hell - and you know they're going there because where would this film be without the excellent William Sadler returning as Death? - the only genius new beat comes from Anthony Carrigan's inept future android assassin, Dennis. His interactions with Bill & Ted (which even make them start to wonder why they keep calling each other "Dude") are sharply witty and whimsically random too, and the film could have done with a whole lot more of that kind of humour. Indeed, a bit of judicious pruning in the opening act, and more time spent with this 'trio' and you could have likely had a more memorable third entry.

For a thirty-year later sequel, this isn't the Blade Runner 2049 or Doctor Sleep of the franchise, but don't expect it to be and there's still some fun to be had

The ever-watchable Samara Weaving (great in Ready or Not, with her absence leaving Netflix's Babysitter sequel significantly worse off) is great as Thea, Bill's daughter, although Atypical's Brigette Lundy-Paine appears to be too busy 'playing Ted' to really become a character of her own, and the plot of the two daughters does seem like a sideways attempt to reboot the franchise by basically repurposing Excellent Adventure's story for a new generation (and, ultimately, pulling a Dark Fate too), but the cross-narrative of the dads trying to save their marriage (!), whilst the kids try and save the future, isn't without its merits, at least finding some heart in their later sacrifices.

Of course everybody is waiting for Death to turn up (though hopefully not literally), and Sadler doesn't disappoint, with his Death now a little washed up himself after his post-Wyld Stallyns fall into obscurity. Getting here a little sooner would have been even better though and, for an 80 minute movie, Bill & Ted Face the Music has a surprisingly number of wasted moments. For a thirty-year later sequel, this isn't the Blade Runner 2049 or Doctor Sleep of the franchise, but don't expect it to be and there's still some fun to be found in settling down with some old familiar faces for one last reunion.

Enter our competition to win a copy of Bill & Ted Face the Music on Blu-ray. Closes 1st February 2021