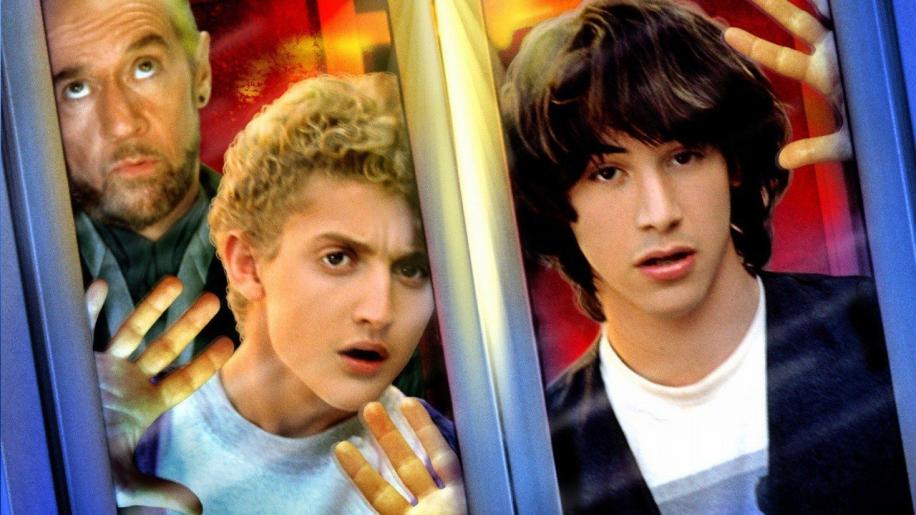 Adventure has a theatrically correct 2.35:1 anamorphically enhanced for widescreen TVs aspect with an average bitrate of 7.2 Mbps. Two words popped into my head when watching this film; digital processing, and the picture has suffered. First up the picture detail is excellent, very sharp images with contrast levels set to give deep true blacks. However the cost is to have a picture that looks too thin, enhancing the grain and original film defects (such as specks and dirt) have the effect of thinning the colours giving a washed out feel to everything. Location shooting suffers the most, with grain really becoming a problem. The brightness level seems to fluctuate too in some scenes giving them a pulsating feel. All rather disappointing; better than VHS, but a mile away from prints we have come to expect.

Bogus has a theatrically correct 1.85:1 anamorphically enhanced for widescreen TVs picture with an average bitrate of 8.12 Mbps. Unfortunately it too suffers from the same problems as Adventure but they are nowhere near as pronounced. The colours are far more striking and bold, giving a richness and depth to the picture so lacking in Adventure, but still the grain and edge enhancement are there as a result of processing. Contrast levels are set well giving good blacks with colours being well represented. No compression problems were evident in either film but they both suffered from original damage. Both films have been given a Dolby digital 5.1 overhaul replacing the original stereo. Unfortunately neither are very immersive, both happy to give reasonable left-right separation over an above front-rear. There are one or two decent effects, such as thunder and occasionally from the score, but the rears hardly get a good workout. It is a shame as there is plenty of scope in both films to give a fully decent experience; the 'time circuits' in Adventure are a prime example of a missed opportunity. However, what we are given is a decent enough mix, front heavy but always clear and precise. Not much in the way of bass, the range keeping firmly to the middle to high end. Of the two films, Bogus get the better mix, with far more use from the rears and better separation effects. This is the section that most will be getting this set for, an entire third disc packed with all new extras.

But the bonus third disc is where the meat is. First up we have an all new making of feature called The Most Triumphant Making of Documentary and it reunites many of the original cast and crew that reminisce about making of the film. All the major players are accounted for, except Reeves, somewhat conspicuous by his absence, including writers, directors for both films, producers and Bill himself, Alex Winter. It is a half hour piece with very little film padding and is both entertaining and informative. Starting at the writing stage and taking us through the making of both film, all have much to say helped by original behind the scenes clips and film clips. As the title says Most Triumphant.

Second up we have The Original Bill & Ted: In Conversation with Chris & Ed; writers Chris Matheson and Ed Solomon talk to each other about their influences and ideas about the characters and development of Bill and Ted. Filmed at the same time as the above documentary, this has no third person and is purely a conversation as the two reminisce and joke about their experience during the writing and making of the two films. It is an excellent piece and I prefer it to the above documentary, it seems more honest.

Next we have the final of the 'serious' features entitles Score! An Interview with Guitarist Steve Vai, the musician hired to score the films. He is an interesting character and talks about his early life, influences before proceeding to tell us about his experiences on the films, everything is apparently a last minute thing! Interesting and runs for about fifteen minutes.

The first of the 'spoof' extras is Air Guitar; a tutorial, which is an interview with the top two experts on how to air guitar. The two protagonists are both a little too serious for me and that is what makes this piece so funny; though at 15 minutes it is pushing it a bit.

Next up we have Hysterical Personages: A History Lesson, this is a voice over by Winter in his Bill persona given actual facts on all of the historical figures depicted in the film accompanied by studio photographs of the characters. Nor particularly funny so you can choose to watch it at double speed if you wish.

Then on to The Linguistic Stylings of Bill & Ted video dictionary, essentially an explanation of the duos odd use of language and examples taken from the films, one watch I think.

One of the best extras is the pilot episode of the TV cartoon series that was broadcast between the two films. Following the same time travel format and equally as daft it is voice by all the principles and is ok in a goofy kinda way, more for the kids though this one.

There are six radio spots that run one after the other, again accompanied by studio stills of Bill and Ted this time.

From Scribble to Script is a series of scans of the original drafts of Chris and Ed's musings over the Bill and Ted script. Little too small to read the text on my 32 inches though, perhaps a projector is needed for this. Accompanied by music from the films. All in all MGM have produced a very worthwhile set. If you don't own the films then this is certainly the way to buy them; if you do I think the all new extras make for a decent upgrade; even if the quality of the films themselves is rather suspect. Just remember “Be excellent to each other” and “Party on Dudes” because these films will.