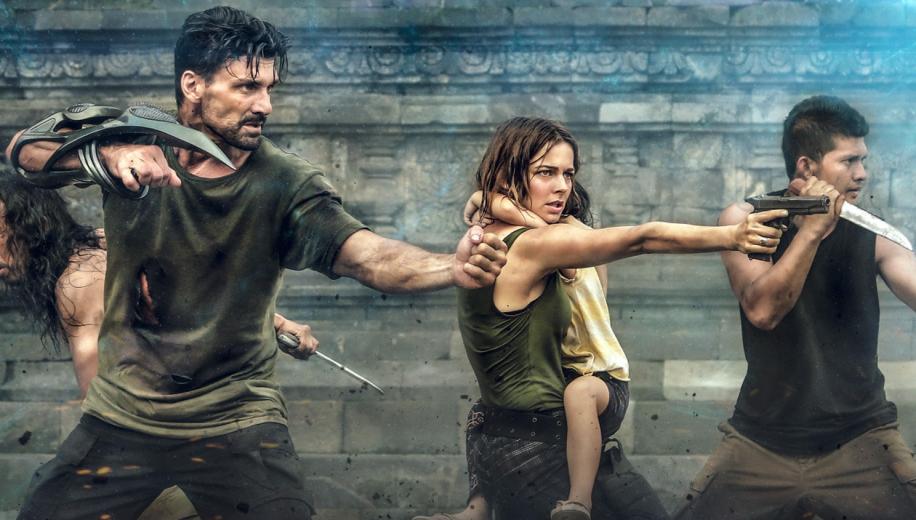 Although Skyline didn't exactly set high standards, this is still a rare superior sequel, benefiting from the presence of both of the stars from The Raid as well as the underrated Frank Grillo.

Strangely big scale for such an evidently low budget affair, Beyond Skyline initially doesn't appear to have much in common with its predecessor beyond the name (was it ever franchise-making material?) and the loose concept of an alien invasion with alien abductors who use a blue beam of light to 'hypnotise' anybody who looks into it. We follow an entirely new group of people trapped in LA as the aliens invade and the army reply in kind, but it's not long before more obvious strands tie us into the first film's ending and the characters therein. Grillo leads a disparate bunch of survivors, torn up through abduction and eventually landed in Indonesia where the few of them left have to face enemies both human an alien, teaming up with Iko Uwais's rebel (in something of a glorified extended cameo role) for one last ditch attempt at stopping the invasion.
Written and directed by Liam O'Donnell - who wrote the first film and makes his directorial debut here - Beyond Skyline ditches the PG-13 restrictions of its predecessor, dishing out more action and gory violence in the first act than in the entirety of Skyline, as brains get regularly ripped from heads, and people are generally torn apart (or, if Uwais is behind it, stabbed repeatedly in the neck, The Raid-style). Grillo gives the film some strange credibility, despite clearly skirting the edge of straight-to-video fare, and O'Donnell's familiarity with the world he build first time around affords the production a nice world-building vibe. Indeed if you watched the films back-to-back, the connections would probably be pleasantly strong, but Skyline just isn't a very good film, whilst the sequel is a surprisingly enjoyable alien sci-fi horror actioner.

Beyond Skyline comes complete with a decent 1080p/AVC-encoded High Definition video presentation framed in the movie's original 2.40:1 widescreen aspect ratio. It's a softer, hazier affair than most would have hoped for, but this gives it a more filmic quality which helps belie the film's clearly nominal budget.


For a low budget sequel that nobody was expecting to see, the presentation is more than acceptable

Detail is reasonable but nothing to write home about - a payoff for the filming style - with even some close-ups a little smoother than you'd have liked, not quite smudged into all oblivion, but still frustratingly unfocused at times, and not helped by the lighting, which is oftentimes limited at best, at least during the night time sequences. Here the image is lens flare central, and some of the stronger light sources - the red subway tunnel lights for example - bleed quite obviously into the surrounds. Black levels are strong enough, without too much in the way of crush, but it's not exactly a very pretty picture.

As stated, the budget is quite restrictive in this piece, and the presentation should be given some measure of leeway because, as a result of the style of presentation, the effects are arguably the last thing that stand out - indeed some of the city-scale attack sequences both at night and during the day look quite impressive. Indeed, daytime sequences are all-round more pleasing - and the shots in Indonesia even more so, with the benefit of gorgeous greens and vibrant landscapes - still a bit softer likely due to that handheld style that the film is going for, but much better than in the dark, and even the effects-heavy alien sequences have their moments too, affording the creatures - both through VFX and more reliable practical work - the kind of detail that would make Giger smile. For a low budget sequel that nobody was expecting to see, the presentation is more than acceptable.

The accompanying DTS-HD Master Audio 5.1 soundtrack certainly does the job, brimming with loud, in-your-face action and invasion setpieces that tear through your living room or bring alien craft to hover above your head. A generic, unmemorable, overly aggressive soundtrack actually gives it some further punch too, helping the feeling of increasing chaos over the first act.


It's not particularly subtle but it is undeniably effective

Dialogue is one of the least important aspects of the piece, but remains clearly and coherently disseminated across the array, whilst effects bring the alien craft and creatures to life with all their creepy intricacies, and decimate your living room with shotgun blasts, handgun rounds and even a tactical nuke or two, thundering underfoot with LFE accompaniment and dominance over the surrounds. It's not a particularly subtle affair, but it is undeniably effective, with enough presence and atmospheric action to help you get swept up in the action-packed maelstrom.

Nothing but a couple of trailers on startup

Beyond Skyline hits UK Region B-locked Blu-ray courtesy of Signature Entertainment, who deliver solid video, very good audio, and no extras, leaving this a decent enough release for fans. It's admittedly low budget fare, but quite enjoyable when you consider the odds against it, surpassing the first movie and delivering a remarkable amount of action and some nifty ideas despite its restrictions.