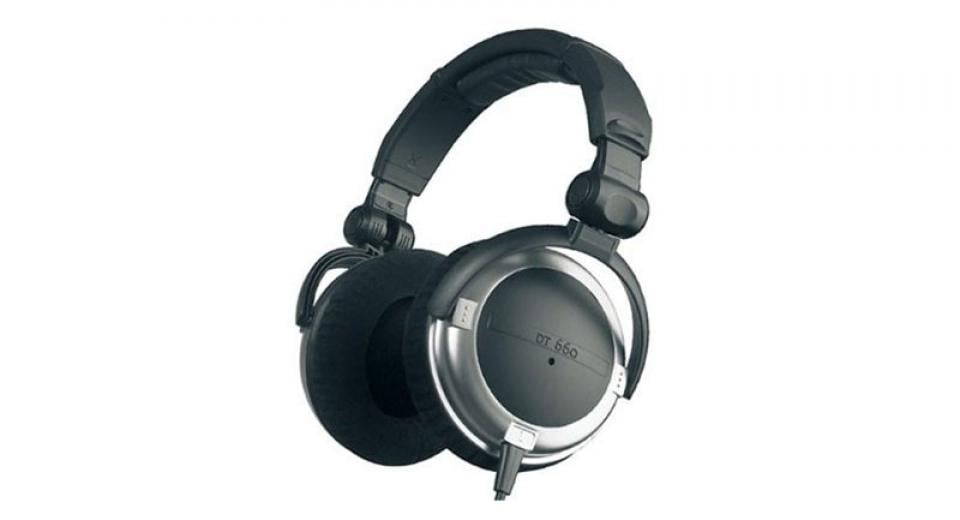 Beyerdynamic is German and as a going concern are coming up to their ninetieth anniversary. As well an extensive range of professional and domestic headphones, the company also makes microphones, airline headsets and conferencing systems. The DT660 is part of an extended range of models that are available as closed back and open back models. The DT660 is a closed back design.

After the Audio Technica, the Beyerdynamic is the largest model in the test and with an all up weight of 340g it is also the heaviest. Beyerdynamic is slightly cagey about what the drivers used actually are but given the size of the earpad and the relatively dense construction, it is fair to assume that they are of a similar size. Unlike the Audio Technica though, the DT660 is a practical proposition for portable use. The earpads are able to rotate flat as is the case with the AKG but they can also be folded upwards into the headband. The result is never going to be as compact as the Solo HD but it is still impressively portable.

Not all of the features are quite so amenable to use on the move though. Beyerdynamic has also seen fit to provide the DT660 with a (non detachable) three metre cord which is a bit cumbersome unless you lasso it with a wire tie. As you might expect, this does not feature an inline remote for an iPhone or similar. The jacket for the cable also doesn’t feel as robust as some of the other models here. If you are looking for an all rounder though, the DT660 does enough to work well both at home and on the move.
It is also a very well built design. The fit and finish is of a very high standard and the components used feel good to the touch and also like they will last a long time. They are not the most attractive units going but the overall design feels like the result of a logical process rather than being styled for any particular reason. On balance, they are just small enough to not provoke confused looks when using them outside.

Although the weight is the highest in the test- pretty much twice that of the Solo HD- they are also very comfortable. The headband is conventional but well padded and effectively distributes the weight across the head. The earpads encase the ear well and the material pads might not look as smart as leather ones but are definitely comfortable. I was able to wear them for extended periods without experiencing discomfort.

The party piece of the DT660 is noise control. As a closed back design you would expect them to be quiet but they still surpass expectations. It is perfectly possible to sit in a library playing the Beyerdynamics at the sort of level that The Prodigy might consider anti-social and leak nothing to the outside world. They are equally effective at keeping everything else at bay as well. If I had to choose a pair of headphones on test for use on a long flight or to attend the filming of Britain’s got talent, this would be it.

Beyerdynamic also has a strong background in pro audio and this is partly reflected in the sonic performance of the DT660. Like the AKG, this is a very neutral performer but there are some differences in the way the Beyerdynamic performs that moves towards the head of the group and in some instances right to the top of it.

The main reason for this is that the DT660 has truly exceptional detail retrieval. They can find new information even in pieces you think you know intimately and this applies equally to TV programs and other non musical material. Bass is both deep and beautifully defined and has a real sense of speed that gives music a sense of life. They also have an excellent sense of space and soundstage. This isn’t quite as open as the Audio Technica but it is close and has the added benefit of not being affected by the noise levels around you.
The tonality is extremely good too. Voices and instruments are believably real and the overall sonic balance feels very good as well with no part of the frequency spectrum forced or given undue focus. There is a slight trade off to be made in this accuracy in that if you listen to very compressed material, the Beyerdynamic will show you most of the limitations that this material has. 256kpbs MP3 and services like Spotify are perfectly listenable though.

Switching to lossless and high resolution material really shows what the DT660 is capable of and they proved equally adept with Ableton and Kontakt. They also gained in performance when used with external headphone amps as well. They aren’t cheap but they do have considerable scope for handling upgrades and improvements you might make to your system.

In terms of sensitivity, the DT660 is capable of working well with portable devices. It is not the most sensitive headphone here- quite a long way from it in fact- but because it is so effective at blocking noise, the volume levels required from devices are lower than many of the more sensitive designs.

The Beyerdynamic is not the best home headphone in the test and neither is it the best portable. Where it excels is that it is very close to the top of both categories. It offers almost all of the performance of the Audio Technica when listening at home but is portable enough to allow for that performance to be realised on the move. Add in the excellent build quality and you have a superb all rounder that should work well in all conditions.