"You're not gonna fall for the banana in the tailpipe?" 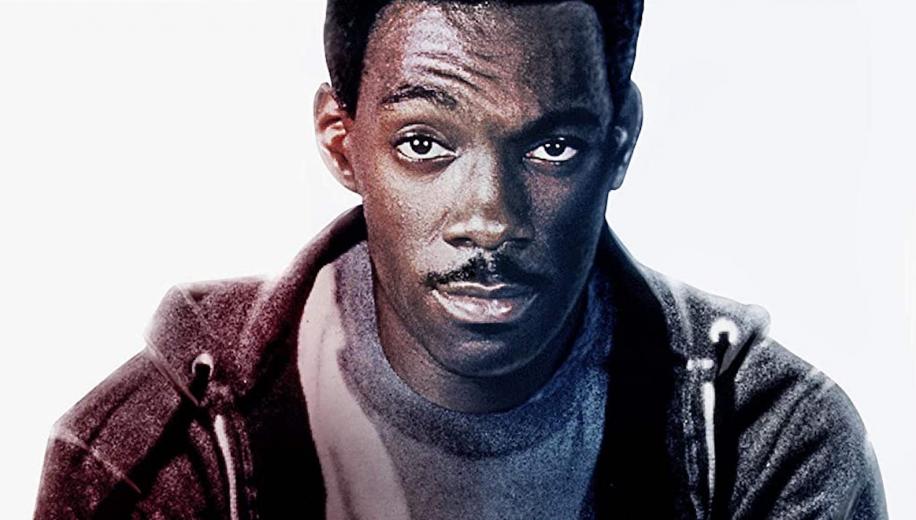 Eddie Murphy's big break into superstardom was an unlikely leading role which was basically moulded into an improvised Murphy vehicle to genius effect.

Beverly Hills Cop was a relatively low budget R-rated film made back in the days when nobody really expected R-rated movies to make a great deal of money. It was also director Martin Brest's big break but, at the time, it had a thrown-together script, and a frenzied shooting schedule, both of which were informed by improvisation at every turn (often because key scenes in the script cost too much to film). Originally reported to have been a Mickey Rourke project, and then a Stallone vehicle, clearly the end result would have been vastly different had it not landed in the lap of Eddie Murphy, whose monumental success here would be the start of a tremendous run at the Box Office - the first of seven successive films by Murphy which would open at Number 1, holding the highest grossing R-rated movie mantle for almost 20 years until The Matrix Reloaded.

The fish-out-of-water framework worked perfectly for Murphy, who basically improvised his way through a series of iconic scenes - getting through a succession of increasingly impossible situations, whether it be merely securing a room at a fully booked hotel and working his way into the bad guy's office, or talking his way into inspecting shipments at a customs centre, or even into a prestigious country club to confront that very same villain. Murphy's sheer charisma and absolute confidence was never higher than here. He'd made a hell of a debut stealing the show from established actor Nick Nolte in 48 Hours and then delivering the tremendous Trading Places opposite Dan Ackroyd, but this was his first solo lead vehicle, and he absolutely rose to the challenge, basically rewriting the entire script through his improvisations (so funny that the surrounding cast members had to go to elaborate lengths to try not to laugh on camera) and going on to create one of the greatest 80s movies as a result.

A great deal has to be attributed to Murphy who, back in the day, was seldom fresher and more enthusiastic than this

Brest was also honing his craft, and whilst his career didn't exactly take off in Hollywood (you can blame Gigli for that), he made a supremely underrated follow-up in the Robert DeNiro buddy-buddy action-comedy, Midnight Run, and should have really stuck around for the Beverly Hills Cop sequels as both his career and the films might have turned out considerably better. And his cast may have been largely unknowns, but they were perfectly chosen - Judge Reinhold and John Ashton securing their parts off the back of an audition where they pretended to be an old married couple, and Ronny Cox putting in such an impressive performance as the Lieutenant that it earned him a couple of commanding villainous roles which would go on to define his career (Robocop, Total Recall). Even though Steven Berkoff may have disowned the movie, he's great as the slick bad guy, and all the smaller bit parts are just so perfectly played that you couldn't think of them done with anybody else in the roles.

Indeed, considering all the moving parts here, and all the scenes they couldn't shoot the way they had planned, it's strange to think of the movie as such a near-perfect action comedy, when it really wasn't anything like what they had on paper. The entire finale was supposed to be a high speed chase in sports cars - probably the one that ended up being the climax of Bad Boys - and the whole 'banana-in-the-tailpipe' scene was only improvised because they couldn't afford to shoot a scene in the kitchens where Foley steals some potatoes as per the script, and yet imagine the movie without the running 'banana-in-the-tailpipe' gags, or any of the other improvised scenes, and it would have been a whole lot different (Stallone would go on to mould his straight actioner Cobra on the story he'd wanted this to be) and likely considerably worse. Clearly, a great deal has to be attributed to Murphy who, back in the day, was seldom fresher and more enthusiastic than this, absolutely nailing the role and as a result achieving the very superstardom that likely robbed much of that freshness too (it was good to see it back in Netflix's Dolemite is My Name). From his inimitable laugh to that staggeringly catchy signature theme, 1984's Beverly Hills Cop remains iconic, and a perfect blend of comedy, action and drama, which few could get right over the years.

Beverly Hills Cop comes to UK 4K courtesy of Paramount. This Ultra HD Blu-ray release appears to be founded upon the same 4K master Paramount did earlier in the year for their their latest Blu-ray release, however obviously here it has the benefit of Native 4K presentation and Dolby Vision as the cherry on top.

Beverly Hills Cop was shot for just $13 million, on a rush schedule, by a still relatively inexperienced director shooting from a largely improvised script whose biggest action sequences cost too much to film - it was never going to look perfect. And, even after the expectedly terrible opening optical credits (which are simply never going to look good, due to the limitations of their design), there is some softness to the overall piece which feels both a part of the original source material, and a result of some clear compromises made on the DNR front. Those compromises however - in a move which will clearly trigger memories of Terminator 2's 4K release for those still scarred by it - appear likely a necessity to get an image which, overall, looks so damn good.

Ultimately this native 4K presentation strikes that oftentimes impossible balance between providing a smooth, light and consistent grain field sitting atop a detailed but not overly sharpened image, versus cleaning it up so damn good that it oversteps and smoothes the image out a little too much. Low lighting probably did the feature no favours, as clearly that is where the higher grain existed, and more drastic action had to be taken to keep the levels in check, but closer shots and outdoor sequences - particularly once the action shifts to sunny California - afford a succession of positively impressive, near perfect, moments that remind you that this is one hell of a 4K presentation under the circumstances. Compare, for example, the mid-range conversation between Foley and his best friend in the early part of the movie, with the closer-range conversation Foley has with his Captain in the streets, where he announces his intention to take some vacation time. In the former, the DNR borders on excessive, and it feels like a modicum of fine detail might have been sacrificed, whilst the latter is just stunning picture postcard perfection - you can freeze frame it all day long and see the fine imperfections on Murphy's complexion juxtaposed.

From the Beverly Hills Police Department interiors to Victor Maitland's estate, to even the battered car that Foley drives around in, there is plenty of texture and nuance on offer here, bringing backgrounds to life and vastly outdoing even the remastered Blu-ray at every turn. Softer moments still remind you of the choices made in - Foley and Jenny driving in the open-top at night, for example - but it's a measured, frequently noticeable upgrade nonetheless, and one which impresses all the more when it comes to the implementation of WCG, HDR and Dolby Vision. The colour scheme benefits significantly from the enhanced richness and depth of tones afforded, leaving black levels inky, and no overt signs of banding or crush. The sunny Californian shots look all the more gorgeous, the red Porsche on the run in to Beverly Hills, Jenny's red Mercedes, spinning red police lights and the damn skin tones - it's all stunning. Despite some limitations in the material and what they could do to bring out the best in it, this really is the best Beverly Hills Cop has ever looked - and likely will ever look.

Beverly Hills Cop's 4K Blu-ray release doesn't upgrade to a High Definition 3D object-based immersive audio track, and instead delivers the same DTS-HD Master Audio 5.1 track that has been kicking around on standard Blu-ray releases for the past decade, although that's no slouch and it does a decent enough job with the source material.

Dialogue comes across clearly and coherently throughout, largely disseminated across the frontal parts of the array, whilst effects include a few booming gunshots, some smashing and crashing in terms of vehicular mayhem, and a few punishing body blows, whilst the iconic score - knocked up on a home synthesiser, replicated by teens across the world, and memorable to this day - and some superbly catch song tracks, provide welcome support and are well represented on the track. It's nothing to write home about in terms of upgrade but still a very strong offering nonetheless.
﻿

Paramount's 4K Blu-ray release of Beverly Hills Cop ports over a number - but not all - of the previously available extra features onto the 4K disc itself and, but for the lack of anything new, it's still a strong supplementals package.

The 4K disc enjoys the Audio Commentary, Deleted Scenes, some Archival Interviews, the Mixtape and Trailer, whilst the accompanying Blu-ray has all of those as well as the Isolated Score Track, a trio of further Featurettes, and a Location Map.

Although he would go on to become a superstar, this really was one of those last times that we got a young, fresh, enthusiastic Eddie Murphy who was absolutely at the top of his game, commanding this opportunity to finally take the reins in a lead vehicle, and improvising the hell out of the script to make it his own. As the sequels would go to show, there was no bottling lightning here, despite repeated attempts, and it remains one of the greatest action comedies of all time.

It's iconic, and a perfect blend of comedy, action and drama, which few could get right over the years

Paramount's UK 4K Ultra HD Blu-ray release of Beverly Hills Cop may well prove modestly controversial in its application of DNR, but hopefully most will see just what magic was worked to make the relatively low budget movie look pretty damn great. Sure, there's no soundtrack upgrade, but there really didn't need to be, and the extras were already pretty comprehensive, leaving it a recommendation for fans - or certainly those who didn't pick up the last Collector's Edition. Undoubtedly the sequels will eventually follow but this one was the only classic. Highly recommended.