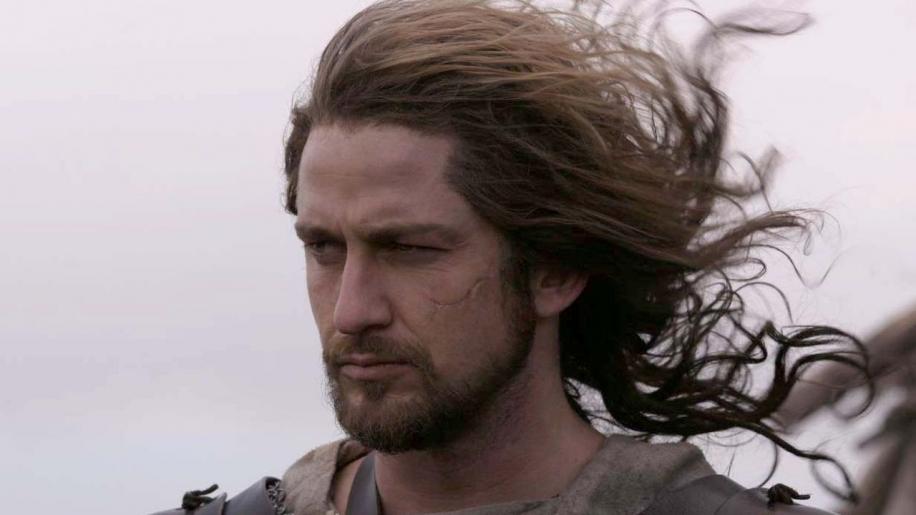 Over a millennia ago a poem emerged detailing the heroic deeds of one Beowulf as he battled Trolls, Hags and Dragons. This work, one of the earliest in Old English history, defined the basis for such pieces as Lord of the Rings and has been studied by academics through history, including a detailed analysis by J.R.R. Tolkien himself. Weighing in at over 3000 lines this poem is by no means an easy read, however for us mere mortals fortunately it's essence has been captured on celluloid.

On opening we see what can only be described as a hairy man playing with whom we presume is his son, a young five year old named Grendel... equally hairy. Danish riders kill the father over the stealing of a fish; the son is spared. Distraught at the death of his father Grendel tries to wake him, on failing he slices the head from his dead father's body and vanishes into the wastelands.

Some years later the Danish King, Hrothgar (Stellan Skarsgård), who had previously carried out this murderous assault on a simple fish stealer, finds that his men are being brutally slaughtered by a troll. This troll is the now grown Grendel (Ingvar Eggert Sigurðsson), seeking revenge for having his father taken from him. Beowulf (Gerard Butler) on hearing Hrothgar's plight offers his aid. Beowulf stalks Grendel; Grendel in the meantime plays cat and mouse with our eponymous hero. Obviously more than just a troll Beowulf comes to learn that Grendel had thought, speech and feelings.

The film takes inspiration from the first two thirds of the epic poem mentioned earlier and covers the period in Beowulf's life where he battles Grendel the troll and the sea hag, Grendel's mother, the dragon obviously being a step too far for this limited budget production. Returning to our screen we see Gerard Butler, more famously known within these pages as King Leonidas from 300 however bear in mind that Beowulf & Grendel was imagined on film a year before he rose to fame with the stylised Zack Snyder production. Like 300 Butler casts an impressive performance as the commanding, knowledgeable and moral leader of his Geatland warriors.

Directed by Sturla Gunnarsson, who comes from a predominantly television background and who's resume includes episodes from The Twilight Zone and Alfred Hitchcock Presents, he explores not just the adventure and battle between two foes but the nature of friendship, revenge, understanding and justice. True to the poem to a certain degree it also incorporates elements of Paganism being replaced by Christianity. Whilst Hrothgar sees many of his men destroyed by this vengeful troll he and his men lose faith in their own Gods, replacing them with a new forgiving Christian God and this comes across well with the inclusion of an Irish missionary monk, sent to convert the heathen hordes to The New Testament.

Shot in the barren wastelands of Iceland, Beowulf & Grendel is a wonderful sight suiting the mood of the film perfectly. Moody, bleak and at times depressing much like the feelings which Beowulf, Hrothgar and their men come to terms with as they face their strongest foe. What comes across the most though are the feelings that Grendel himself is not the troll or beast that was first imagined. The viewers realise this from the outset, all he does is seek revenge for the petty murder of his loving father. Beowulf too comes to see this as, the film progresses he questions his own reasons for taking on this task and ultimately comes to respect Grendel and the motives which drive him onwards.

The film is let down though by the dialogue, not just the multitude of accents, from Scottish, Irish, English and Geordie (a tongue all of its own!), but the actual scripted lines. The accents themselves start off being a little laughable and you wonder if some more effort should have been made to transform these actors from locals you might bump into in your local tavern into the Norse combatants pictured on screen. By the end though these are mainly ignored as the pace and plot of the film sweeps you away. Much the same cannot be said for the dialogue though, all too often permeated by modern language constructs and expletives it detracts from the feeling or atmosphere that Gunnarsson in all other areas successfully achieves.

Beowulf has been filmed before in some form or another, the 1999 Christopher Lambert adaptation as well as an animated feature from a year earlier. Of course a high gloss production from Hollywood is about to hit our big screens and if you intend on seeing that, or if you like a little sword action set in a Conan universe, then I can heartily recommend that you give this a try.