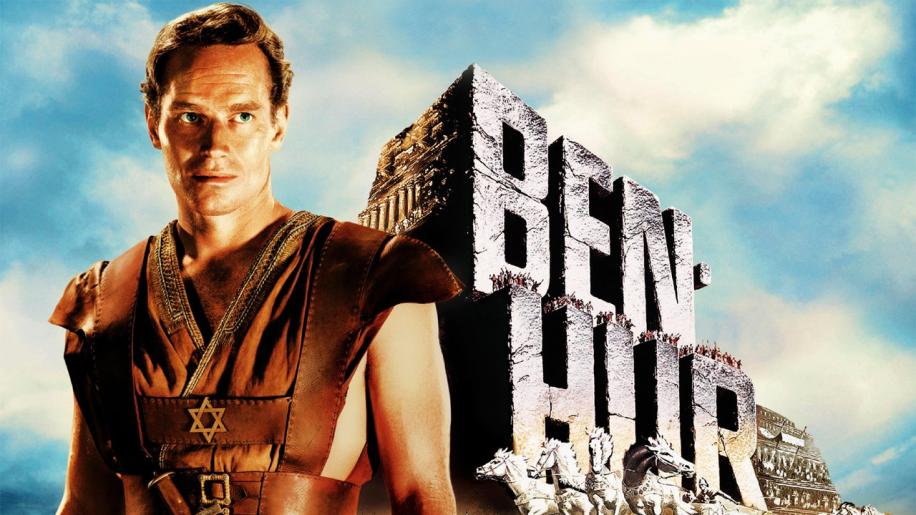 If there’s one movie that film collectors have always wanted in their collection, it’s ‘Ben-Hur’. I lusted after a 16mm Cinemascope print of this picture in the 1980’s, but never managed to get my hands on one as it would have cost in excess of £500 if it was available. Now, here we are 30 years later and we can all grab a fully restored version in High Definition and in the correct original aspect ratio for under £20 on UK Region free Blu-ray. That’s progress for you. We’ve had various video, laserdisc and DVD releases over the years but none have been terribly sharp or done justice to the very wide 2.76:1 widescreen picture. The Blu-ray beats them all hands down and looks superb.

If ever a picture demanded the label ‘Epic’, then ‘Ben-Hur’ is the one – with its massive outdoor sets, hordes of extras to fill the crowd scenes right to the edge of the frame and then there’s ‘that’ chariot race. Released in 1959 and directed by William Wyler, ‘Ben-Hur’ picked up 11 statuettes at the 1960 Oscars including Best Motion Picture, Best Director (Wyler) and Best Actor (Heston). It’s one of those movies that was a special occasion to go and see on its re-release in the cinema, not least of all due to its bottom numbing 222 minute running time. Those who suffer from weakness of the bladder will be pleased to know that the Intermission has been retained on the Blu-ray as the movie is split over two discs. The Overture and Entr’acte music are also in place.

At the end of the day, however, this is really Charlton Heston’s movie and apart from ‘The Ten Commandments’ it’s the one for which he’ll be most remembered. Some say that playing the lead role of Judah Ben-Hur was a barrier to him getting other big parts in Hollywood movies thereafter as it wasn’t considered a ‘serious’ movie – but this didn’t stop him making other handsome and noteworthy pictures such as ‘El Cid’, ‘Soylent Green’ and ‘The Omega Man’ during his career.

Some call ‘Ben-Hur’ a Biblical epic, others call it a ‘sword and sandals’ picture – but whatever the moniker, there’s no denying that it’s a film that involves the audience in the story, entertains and excites as well as moves them at various points. Most modern films usually only tick one of those four boxes and that’s why ‘Ben-Hur’ deserves another title – a classic!

Based on the widely read ‘Ben-Hur – A Story of the Christ’ by General Lew Wallace, it tells the tale of how Jewish Prince Judah Ben-Hur meets up with his childhood friend Messala (Stephen Boyd), now commander of the Roman Legions at Judea. When Judah refuses to inform on his own countrymen, Messala ensures that he ends up as a galley slave on a Roman warship and his mother and sister are imprisoned. After the Roman fleet is attacked in a sea battle, Judah saves the life of the Roman Consul, Quintus Arrius (Jack Hawkins) who then effectively adopts him to replace the son he lost. Young Arrius becomes a champion charioteer and sees this as a way to take revenge on Messala in a deathly chariot race. He then tries to track down his missing family, with shocking results. Along the way, his path crosses that of Jesus and the final reel of the movie contains probably the most moving depiction of the crucifixion ever filmed.

The success of the film as a Biblical epic is due to the fact that it does not labour the religious message. Instead it weaves it in and around the life and adventures of Judah Ben-Hur – thus making it more accessible to a wider audience. As a piece of entertainment, the film takes its time to introduce us to the kind of man that Judah is. We get a chance to like him and his family before life starts to happen to them in the form of the power mad Messala. This is a tale told by a wise storyteller, for we then care what happens to him, we rail at the injustice served upon him and we respect him for his care of others when he saves the life of the Roman Consul. We’re happy for him as he climbs the ladder of success within Roman society and we’re right there with him too as he battles it out with Messala in the chariot race. We also share his great sadness upon discovering the plight of his loved ones. This is a film that takes the audience on a journey through the full gamut of human emotions which requires a good story, believable script, careful direction, experienced acting and only 1001 other things to get right.

Amplifying the emotion is Miklos Rozsa’s rousing score that plucks at the heart strings in one scene, describes great love and affection in another, pomp and majesty in the next and the swelling of pride in the breast at climactic moments. This is a great score that graphically draws a picture of ancient Rome in the mind and augments the superb widescreen images.

While Charlton Heston won the Best Actor Oscar, Hugh Griffith also walked away with the Best Supporting Actor award for his amusing portrayal of Arab Sheik Ilderim and the remaining cast are no less worthy. Haya Harareet as Esther, Martha Scott as Judah’s mother Miriam, Cathy O’Donnell as Tirzah and Sam Jaffe as Simonides – are all very credible within the context of the piece. It’s surprising that Stephen Boyd didn’t pick up a gong for the role of Messala. Keep an eye out for British actor John LeMesurier (Wilson in ‘Dad’s Army’) as a physician in the scene where Messala lies injured.

Shot at Rome’s Cinecitta studios, the exterior sets are quite stunning- such as the huge arena used for the chariot race. When I visited the studios in the late 1980’s, the lower part of the central island portion of the outdoor set remained although the whole area was then being used as a giant car park. To a film buff like myself, this was akin to sacrilege.

So now, to see a movie of the stature of ‘Ben-Hur’ released from its television Hell of grubby looking pan and scan versions is very satisfying. At long last we can see it as it was originally intended and probably far better looking than it ever has before.