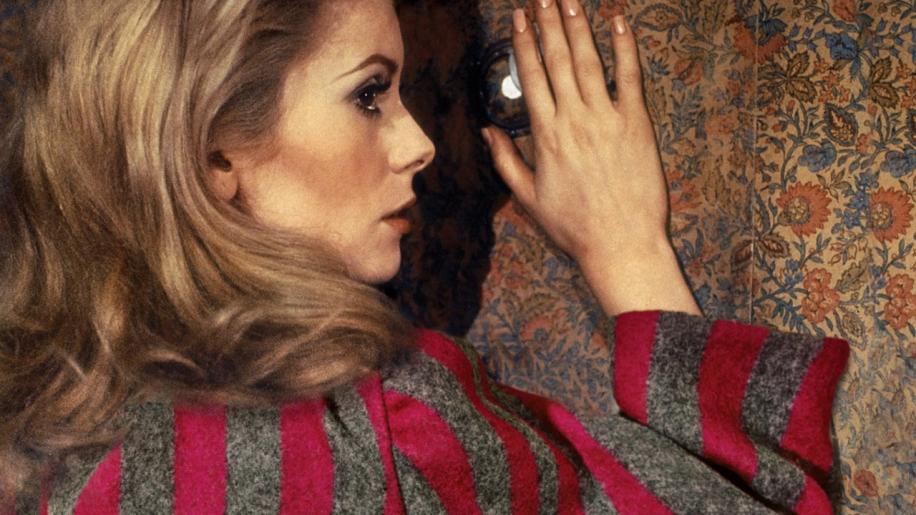 I'm sure the name of esteemed Spanish auteur Luis Bunuel will need little introduction to many film fans. His work consistently put him at the forefront of European cinema for many years and continues to be pored over to this day. Perhaps it was his lack of Americanisation that has led to his name being less lauded than other contemporaries and peers from similar backgrounds. For a majority, the first introduction, and still the most pertinent in its timeless and narrative free brevity is Un Chien Andalou. This teaming with his university friend, noted surrealist painter Salvador Dali is the easiest glimpse into the essence of modern surrealism on film. However, it is his 1967 joint Spanish/French production Belle de jour that marks arguably his greatest escape into the realms of fantasy, and it is fitting that it also marks his debut on the Blu-ray format.

At first glance the synopsis seems fairly straightforward. The story is that of a young Parisian couple; Severine (played by a young Catherine Deneuve) and Pierre Serizy (Jean Sorel). He is a surgeon with a growing and ever more demanding career and she is his doting wife. The role of the socialite wife may not seem the most ripe for drama but therein lies the root of Bunuel's master orchestration. Severine doesn't take to an idle life of domesticity and simple social functions easily as her subconscious starts to bring forth vivid images that are weaved into the fabric of the story. Right from the very first scene we are given a stark insight into what lies beneath the surface of her mind. We watch as the youthful couple take a carriage ride through a picturesque backdrop of a tree lined path. There is a terse exchange of dialogue between the two as the atmosphere of something unspoken seems to dwell in the air. It is clear that there is great affection between the two of them, yet they are distant in many ways. Severine's mind wanders and we are witness to the first of her fantasies, as she imagines herself being forcibly removed from the carriage by her husband and the drivers, who then proceed to tie her up and whip her. The murmurs from her are not those of agony but rather those of restrained pleasure, and once Pierre has seen enough he orders the men to have their way with her which she hardly objects to. We are then quickly returned to reality, as it emerges Severine is lying in bed daydreaming as her husband exits the adjoining bathroom and prepares to turn in. They kiss good night and each settle in their separate beds, thus emphasising the disparity between the dream and real worlds

The central premises of sexual liberation and experimentation are easy to pick up on, as the lines between fantasy and reality are quickly blurred. It is not long before we as the viewer are moved from this simple early foray, by way of Severine's overactive imagination, into an altogether more troublesome moral mire. Via the figure of her friend's boyfriend, an older man named Henri Husson whom she finds distinctly unpleasant, she learns of a low key brothel that operates out of an otherwise indistinctive urban apartment. She is told of a mutual acquaintance who has taken to working there because of a need for money and Severine becomes intrigued by this oldest of professions. It is not long after this encounter that the young wife makes a trip to see this house of ill repute for herself, seemingly not knowing what she will do when she finds it. What follows is a series of half hearted attempts to pluck up the courage to enter and, once she does so and accepts that there is a desire within to taste this life of iniquity, she succumbs and joins the ranks of prostitutes. Not wanting her husband to find out about her dangerous hobby she insists on only working from the hours of two 'til five, and thus earns herself the nom de plume “belle de jour” or “beauty of the day”.

The film is essentially multi-layered. One can take the narrative as a basic diatribe on female emancipation and sexual liberation and it is easy to make the case for such an interpretation. The woman who doesn't work takes on the only job it appears she is qualified to do, as we never learn of any other spark of productivity from Severine. Bored with a life of middle class domesticity she takes her fate into her own hands and throws off the shackles of a cage of opulent domesticity that lacks excitement and freedom. I've always been slightly uneasy about such notations on the subject of female desire and liberation in films as this, as they are so often intertwined and more often than not come from male minds. We don't see our female protagonist as the holder of her own destiny, capable of choosing how to satisfy her desires as she is essentially the underling in any sexual encounter. Severine is painted as an almost child like individual, incapable of making her own decisions and as such desperate for her own subjugation. When thought of in such terms, it hardly makes for a grand example of feminist expression.

The waters are muddied still further by two flashbacks, memories of Severine's which surface at particularly pertinent times. The first shows her as a young girl being molested by an elderly male figure, who bears a similarity to the character of Husson, perhaps explaining her vehement dislike of him. The second of which is a shot of the young Severine refusing to take communion. These two extremely short shots make for an entirely different interpretation that distances itself so far from that of female emancipation that I hasten to say it shouldn't be in the same film. Throughout 100 minutes, without the two aforementioned shots, the explanations would have been far simpler, and I dare say a lot less unsettling. Maybe audiences in times gone by looked at child abuse and the lasting effects of it in a different manner, but in the present climate it is hard to imagine such a film would be so free to gloss over these minimal suggestions in favour of that of sexual exploration and the labelling of following encounters with middle aged men as erotica. Once seen through the lens of Catholic guilt and destructive abused/abuser relationships the laissez faire attitude towards the degrading sexual encounters, marital frigidity and daydreams of verbal and physical abuse make for troubling viewing.

These may be considered criticisms of taste though as Bunuel often commented on the obtuse nature of the film and why it defied a singular universal explanation from him. The greatest of the threads weaved throughout is that of social commentary. So much has been made of this as an erotic masterpiece that maybe my modern mind has been jaded by more graphic imagery and though I accept the hint is more alluring than the simple reality I fail to see a great amount of eroticism within, other than that commented upon by many middle aged critics, so besotted by a pert young Deneuve. Instead I found myself far more interested in the continuing subtle digs at bourgeois society of the day. The idle rich shown here, held by their social mores and faux intelligencia, experience little satisfaction save for that found in the confines of a brothel. There are some genuinely perverse moments of dark comedy that might easily be missed as the encounters between Severine and her clients become more and more bizarre. Yet Bunuel saves his ace card for last, thanks to the introduction of a violent and possessive young gangster who frequents the brothel and becomes especially attached to Severine. The myriad of potential meanings for the story are left behind in one devilish final twist that will leave viewers unaware of what they have witnessed, or indeed if there is any “true” meaning at all. The director was not afraid to highlight that such things were open to interpretation and that a neat conclusion of the narrative was not necessarily his job as a story teller. As such this is not so much a tale to be told, as a puzzle mixed in the body of a social and sexual commentary. There are audio visual cues that can aid interpretation, but they are far from straightforward. The end result isn't perfect and there are definite flaws, especially when viewed through modern eyes, but if you can overlook them you'll find a riddle that is bewitching. Through the process of attempting to uncover your own theory regarding what it means, if anything, and where the line between reality and fantasy is to be found lies the satisfaction.