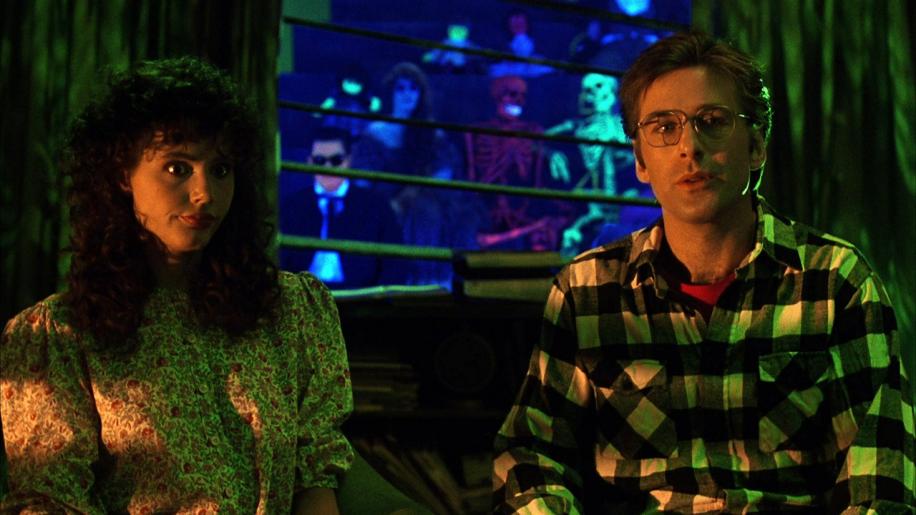 I believe that this is probably the fourth Tim Burton film that I have had the pleasure of reviewing since I started putting my opinions to cyberspace a little over a year ago. So far, I have dealt with his views on the Frankenstein story, delved deep into his imagination for his opinion on why Halloween is the new Christmas and have even had the pleasure of his company for a night of musical theatre with the brilliant Sweeney Todd: The Demon Barber Of Fleet Street

I recently spent another 92 minutes in the company of Burtons' imagination - only this time, he gives us his opinion on something very close to all our hearts - death.


Made in 1988 and now re-released in this twentieth anniversary special edition from Warner, Beetlejuice tells the story of the Barbara and Adam Maitland (played by Geena Davis and Alec Baldwin). They have an idyllic life which is centred around their huge house in the country. They love it that much, they even spend their vacations there.

However, a cruel twist of fate means that they will be spending a lot more time in the house than they had originally anticipated - you see, on a routine visit into town, they were killed - and because this is Tim Burtons vision of what happens when that happens, there are no pearly gates, no horrible trip into hell - nothing. Instead, the dead are stuck on Earth for 125 years. And the Maitlands have to spend it in their house.

The only person who is glad to hear of their untimely death is the estate agent, who has been trying to get them to move out for a while to sell the house - and now is her chance.

Before the corpses go cold, the house is sold to a family which needs to get away from the city after the man of the family, Charles (played by Burton regular Jeffrey Rush) has a breakdown due to stress. Coming part and parcel with the family is daughter Lydia (played by a young Winona Ryder) - who, it seems, can see ghosts. A rare turn by Catherine O Hara as the artist Delia makes up the dysfunctional trio who now occupy the house.

Of course, the Maitlands take great offence at somebody moving in on their territory - especially as they are still in it - and do their best to scare them away. But being novices at the ghost business, they just aren't scary enough... Adam finds an advert in a paper for Beetlegeuse - the ghost with the most - who, it appears, can do their scaring for them - a kind of bio-exorcist. All they have to do is say his name three times.

A pre-Batman Michael Keaton seems to have a ball playing Beetlejuice. He's a horrid spook who will do anything to get out of his world and into anybody else's'. But the star of the show for me is a young Winona Ryder. She plays the weird Goth girl to a tee. As we all know, she went on to be nominated for several awards after this film - but the attention sent her of the rails. Shunned by Hollywood for so long, this talented actress will soon be gracing our screens again in J.J Abrams version of Star trek released next year where she plays the human mother of Spock...I for one, am looking forward to that.

Adam Baldwin and Geena Davis never really give the impression that they could be a married couple - there's very little chemistry between them...Catherine O Hara gives a typical over the top performance as the eccentric artist Delia - who only moved to the country to please her long suffering husband...but you get the feeling that she would rather have stayed in the big city and set up home with her rather camp interior designer

The movie won an Oscar back in 1988 for it's make up effects - and they are good. There are several different ghosts wandering around the set including a woman who is a magicians assistant - and was killed whilst being cut in half - and half of an American football team, who have a hard time believing they are actually dead.

Star of the dead people though is the guy with the shrunken head...laugh out loud funny!

If the make up was recognised for its brilliance back in the day, then I'm afraid the same can't be said for the visual effects. Now I don't know whether they are supposed to be like it, but they are ropier than a climbers backpack! The stop motion effects are sometimes laughable and nowhere near as good as Burtons later works The Corpse Bride and The Nightmare Before Christmas. But it's not just the stop motion work that's bad - the blue screen stuff is pretty unconvincing as well and really shows up the budget nature and age of the film - they really haven't stood the test of time well.

Tim Burton brings along his regular composer for this spooky outing, Danny Elfman who's scores are probably the most recognisable of any composer working in Hollywood today - and this is no exception. It carries all of his trademark percussion solos and deep organ bass to add to that spooky Burton type atmosphere. And the studio have been kind enough to give us a music only track as an extra on the disc.

The special effects may not have stood the test of time - but the film certainly has. It's been a few years since I last had the pleasure of seeing this movie as it was meant to be viewed - correct ratio, big screen - and, special effects aside, it's as fresh as it was twenty years ago. It must have worked because Tim Burton is still making films like this today - and long may he do so. And it must have been iconic - watching Peter Jacksons The Frighteners recently, I realise that the bearded one stole the opening credit titles and the theme from this movie!! I don't know - he'll be re-making iconic movies that don't actually need it soon...