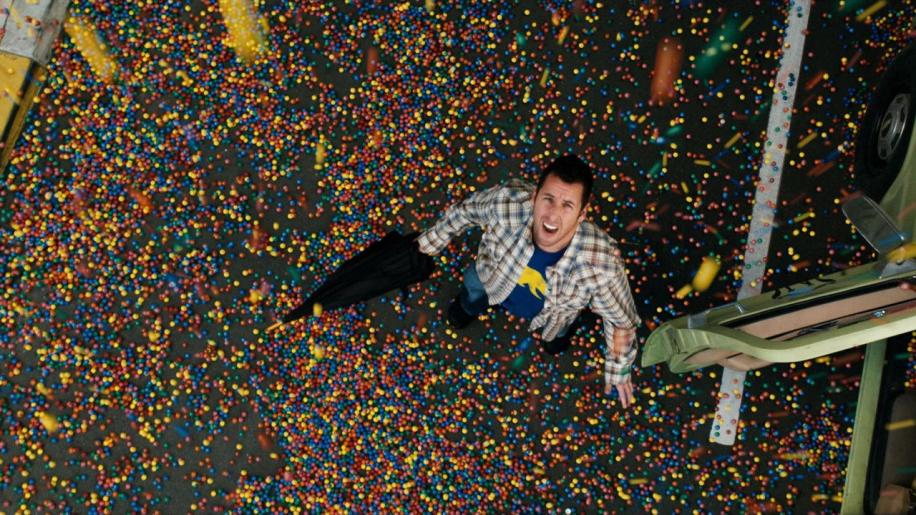 After providing us with a decade of inane but hilarious comedy efforts, playing variations on basically the same aggressive man-child in films like Happy Gilmore, Big Daddy and Mr Deeds, the now seemingly more mature Adam Sandler has finally chosen to diversify in his art. Punch Drunk Love probably marked an early step in this direction - the outstanding P.T. Anderson-directed vehicle which put a spin on Sandler's usual angry self - but more recently he has given us some quite serious films: from the quaint Spanglish to the poignant Reign on Me, which detailed the trauma suffered by a 911 widower. Even his surreal You Don't Mess with the Zohan comedy gave us a new side to Sandler, where he actually played a totally different character to what we have always seen from him before - and to great effect - marking his best comedy movie alongside Happy Gilmore. Partnering up with Seth Rogen for the third Judd Apatow offering, Funny Men, Sandler clearly intends to continue his trend to make slightly more substantial, unusual movies - even if they mostly still reside within the comedy genre, although last year saw him partake in Bedtime Stories, a child-friendly tale of fantastical dreams literally coming true - for good and for bad.

Born with a wild imagination, Skeeter Bronson spent his formative years helping his dad run a small family hotel, entertaining his sister with his crazy antics and dreaming of taking over the business when he grew up. Unfortunately, faced with bankruptcy, his dad sold the hotel over to Barry Nottingham, a rich businessman, under the condition that Skeeter could work there and prove himself as an adult. Cut forward a few decades and Skeeter is still working as a hotel handyman, although now Nottingham is planning on handing over his mantel, potentially to his weasely future son-in-law. Through a twist of fate, Skeeter manages to get in the running to be a contender for the throne, but he has to prove his worth to Nottingham. As he fights the good fight, he finds out that - inexplicably - the bedtime stories that he is telling his nephew and niece, whom he babysits at night, are coming true. Initially perturbed, he decides to try and use this to his advantage, attempting to change fate by telling them the stories that will impact his own life in a beneficial way. But life is not that simple, and getting the girl and saving the day may all come true - but which girl, and at what cost?

Bedtime Stories is the flimsiest Sandler vehicle since Billy Madison, his film debut. It is no wonder that it is also the only PG film that he has ever done. Reversing my criticism, and stating that it is intended for children, I still wonder whether it works even on that level. Surely children want bedtime stories which are rich and vivid, surreal and adventurous, and reasonably funny too? Here Skeeter's stories are pretty lame, and the reality that comes from them even more so - few could have a worse imagination than this guy. It feels like one of the scriptwriters pitched the idea that all you need to make a kids movie about dreams coming true is a Ferrari, a few gumballs and a mermaid.

For adults, there is simply nothing worth watching here. Believe me, just watch the trailer and you'll get all the funniest bits - and even then these aren't all that funny. Sandler seems restrained - and not in a good way like for Spanglish, instead totally playing it for a child audience, dumbing down his actions and speech, and relying on the silliest, most unimaginative gags to get a laugh. Sandler is better than this, capable of a reasonable range from solid drama to frivolous comedy, but when his hands are tied so tightly to cater for the youngest possible audience (in mental age too) he becomes too watered-down and insipid. His jokes aren't funny, his character is not particularly likeable (because he is just too goodie-goodie, like Happy Gilmore except without the requisite anger management issues) and even the kids are irritating (unlike, for example, in Big Daddy).

And Sandler isn't the only one who seems restrained, with the outrageous Big Brother commentator-turned comedian Russell Brand toned-down to a shadow of his normal self, L.A. Confidential's Guy Pearce playing a weasel slimy enough to set new standards for the stereotypical pantomime villain, an almost unrecognisable Lucy 'Xena' Lawless playing some inane receptionist, an over-collagen-lipped Courtney 'Friends' Cox unremarkable as Skeeter's sister, Mission Impossible 3's Keri Russell as the boring day babysitter and even a voice-dubbed cameo for Ronin's Jonathan Pryce (why, oh why?). In fact all of the cast members put in totally unremarkable performances, and the resulting movie is not in the slightest bit memorable. Even Sandler regular Rob Schneider has barely anything to work with, and he is normally reliable for a few laughs. I love all these performers - Brand was hilarious in Forgetting Sarah Marshall (and his upcoming spin-off Get Him to the Greek), Guy Pearce was recently on good form in the solid Don Cheadle thriller Traitor and Lucy Lawless has been a reliable entry for Battlestar Galactica. And diluting them for the benefit of children really doesn't benefit anyone.

I actually wanted to see this movie at the cinema, but I am really glad that I missed it - it is tough to recommend this movie in any way, shape or form, mainly because it really has little more to offer than the trailer - and the 7 minute preview that was released - showcased. Watch those and you truly get the best bits, the only laughs, and hopefully it will be enough to keep your hunger in check until Sandler gives us something funny again - with any luck in the upcoming Funny Men. You may be tempted to pick it up for child value but I'm not even sure it works particularly well on that level, the fantasy side being as diluted and tame as the comedy. Disappointing all round.