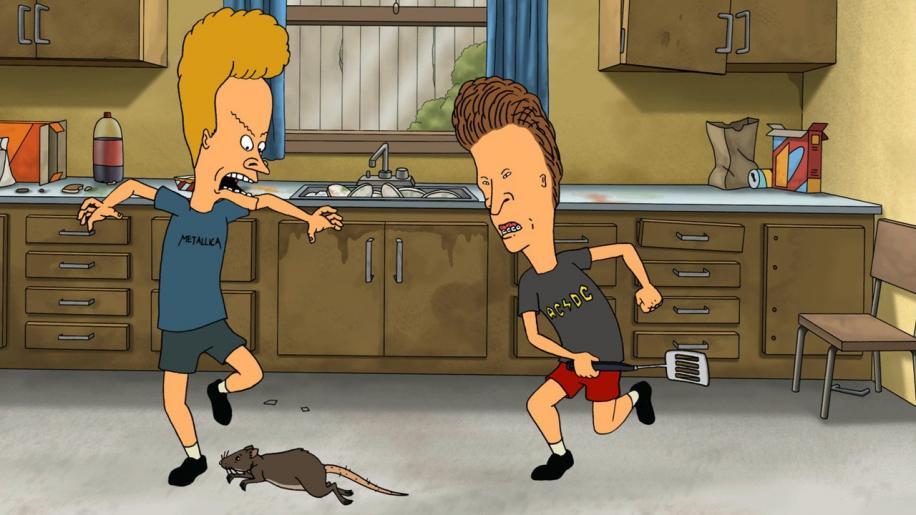 Beavis and Butthead is presented its original fullscreen aspect ratio, with a non-anamorphic transfer. It looks pretty good considering the original source material, with good line detail, no softness and very little grain. The colours are generally quite decent but there are momentary lapses where it looks a bit faded, although the black levels are nice. There is no sign of print damage and the animations are basically in the best condition we are ever likely to see them in but it is certainly not a video presentation worth writing home about. The soundtrack is a basic Dolby Digital 2.0 mix that sounds perfectly fine. The dialogue - which is not only the most important thing but also sometimes the only thing in some of the episodes - is presented clearly and coherently (even Cornholio's ramblings). The score - which is the only other notable thing - plays out in the brief introductory segments before each episode and sounds decent enough, although again nothing special. There are a few effects - plates crashing, the boys hitting one another or power tools being wielded - but none of them broaden the array to any degree. It is a perfectly reasonable soundtrack that is, again, probably not only the best we are likely to hear this show in but also the best way it really needs to be presented (I cannot see the justification for 5.1 with this material). It should also be noted that the music video episodes on the third disc have considerably better sound (albeit still Dolby Digital 2.0). Most of the extras are on the third disc, although there are a couple of hidden features on the first two discs, both assessable by pressing the third button down on the animated remote control that is shown during the opening menu. On the first disc this gets you an extra minute of the boys talking each other through a toilet experience and on the second disc we find out how they managed to spoil the meat at Burger World.

On the third disc we get a selection of eleven of their music video episodes where they watch and comment on myriad music videos. This is probably the format many viewers will be more familiar with, having been shown on MTV endlessly for several years. Some of the comments are simply superb, like the commentary over the Pantera music video where they talk about him being too uptight - “Does this Pantera guy, like, ever relax or did his parents, like, shout at him all the time when he was a kid?” or the one where Beavis does an impression of the lead singer from Moist. They mock one of the bands for making a noise that sounds like a smoke alarm, Beavis turns into a proper music critic for a moment (and then gets slapped back to reality) and they slag off film scribes hilariously. None of them are full music video length, all lasting just a minute or two, but they are definitely worth watching and at least as funny (if not funnier) than some of the episodes. The only disappointment is that they don't have more in this collection (I guess we will have to wait for the next instalment) as my own personal favourite was not included - the one where they are watching a music video recorded using some kind of thermal imagery (so that body heat comes up in blues and reds etc.) and make the immortal comment “Is this, like, Predator?”

The Featurette entitled 'Taint of Greatness: The Journey of Beavis and Butthead, Part 1' takes a good twenty-seven minutes to explain the history of these characters, with Creator (and voice artist) Mike Judge, writer David Felton and Animation Director Yvette Kaplan talking about where the names came from, how the project came into existence and the development of the show over the years. We see the responses of the original test audiences who watched the very first 'Frog Baseball' cartoon, how the boys wanted to buy the video and the girls thought it was gross (apart from the Jersey girls who actually loved the fact that it was 'nasty'). It is very interesting to hear how it suddenly snowballed into a movie, becoming an instant hit practically overnight, with plenty of clips from episodes both on this disc and not included in this particular collection. Well worth your time, you will get to learn a huge amount from the respective crew members and it is sure to be interesting to any fans of the show.

We get a couple of Special Appearance segments, mostly devoted to the VMAs in '94 and '96, which has them comment on the proceedings, scornfully imitating the thank you speeches that winners come up with and also chatting somewhat successfully with David Letterman. The '96 segment (where they themselves won) has Beavis doing a Groucho Marx impression for their acceptance speech. The final Special Appearance is the MTV Thanksgiving Special with Kurt Loder. Although eighteen minutes long, Loder's contributions (or just plain interruptions) get a bit irritating after a while. Still, the moments with the boys (and there is plenty from them here) are pretty hilarious, with them talking about sex dolls, talking about the homeless and trying to communicate with the annoying host.

We also get several Promos: the Clinton Promo (for an episode that does not appear to be on this disc), the Waco Promo (which is quite funny) and the Dumb Fun in the Sun Week Promo, all running for between fifteen and thirty seconds.

Then there are two montages: Greatest Hits and Terms of Endearment, the former featuring sixty seconds of them slapping each other around and the second having them spend the same amount of time doing variations of their names. All of the clips are taken from episodes in this collection (as far as I can tell) so I guess these montages act basically as brief trailers for this box set.

Finally we get trailers for Jackass: The Box Set, South Park Season 6, Drawn Together Season 1 and the videogame LA Rush. There is a also a preview for the upcoming DVD release of Aeon Flux, which has finally been given a decent release (with all of the episodes included). I know it has been done to cash in with the upcoming Charlize Theron movie (where she shamefully does not dress in the same attire) but that does not stop it from being great news for fans of the classic (and superb) original animation. Beavis and Butthead has had various media incarnations over the years, the main DVD releases so far being the hilarious movie and the Best Of collections. Now we get the creator's own 'Best Of' and it is a pretty good selection indeed - certainly including some much more polished episodes than we have previously encountered. The video and audio is as you would expect and there are a few interesting special features but the forty episodes and near-dozen music video segments are what you really came here for. Sure, this is certainly not to everybody's taste, but those who do enjoy Beavis and Butthead will love this box set.