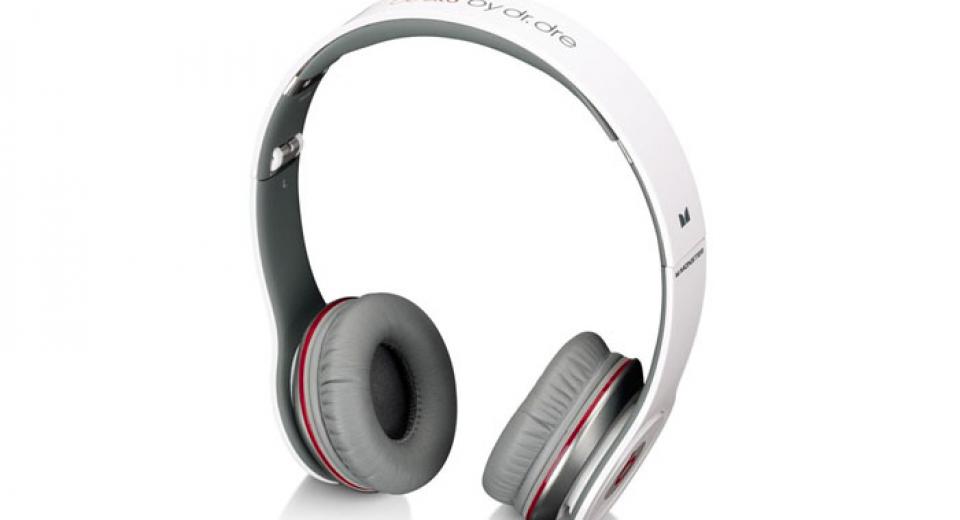 Not content with simply being a dominant force in music both performing and producing, the “Beats by Dr. Dre” range of products has been steadily expanding since their release in 2009. The Solo HD is part of the extensive over ear range of products and is available in black, white and limited edition fire engine red for the extroverts among you.

Of all the models in the test, the Solo HD is the design best adapted for use on the move. Two cords are supplied in the box which lends certain advantages. The first is that one of the supplied cords is fitted with an inline remote for iPhone and iPad control complete with microphone. The second is that as the cord detaches at both ends, the connection to the headphone itself is not a “stress point”; if you are leaving a busy bus or train and snag the cable, it will simply detach at the end with the greatest tension on it without risking damage to the headphones themselves. The third is that if you wanted to use the Solo HD at home, you could spend out on a cord that was just as long as one fitted to the more domestic orientated designs.

The headband of the Solo HD has a hinge on either side that folds the earpad section inwards and coupled with the removable cable this makes them the most compact of the designs in the test. The earpads are mounted on a pivot contained within the headband which gives some movement up and down but not left and right on the ear. A small amount of padding is fitted at the top of the band but given the relatively light weight of the design, it isn’t really put under any strain.

The build quality is pretty good too. The folding hinges are metal and the general quality of materials feels substantial and pleasant to the touch. The supplied pair was finished in white and has been out and about as a review pair before coming here. There is no sign of marking or discolouration that can often affect white products.

In terms of comfort, the Solo HD is more of a mixed bag. The earpads are pleasant enough and the headband has enough traction to ensure that the phones stay in place even when moving about vigorously. The flipside to this is that combined with the earpads not pivoting from side to side, I found that they start to squash the back of my ears after an hour or so. Given that the earpad is the smallest of any of the models on test, the amount of noise that they leak both outwards and inwards is commendably low. Listening at high levels in a public place might get you a few glances but nothing too serious.

Of all the models in the test, the Solo HD is the one with the most distinctive “voicing.” They don’t really sound like any of the other designs and whether or not this is a good thing will largely come down to personal preference and how you intend to use them. As well as designing the Solo HD for use on the move, they seem to have been voiced that way too.

This is most apparent in the bass response of the Solo HD. The low end is substantial and goes genuinely deep. The problem is that compared to the AKG or the Beyerdynamic, the detail in this bass is less well presented. It comes across as more of a single deep “note” of bass rather than showing up all the detail in the mix. This is somewhat overbearing when sat in a quiet environment but makes a little more sense walking down a noisy street. Upper registers can seem a little recessed in comparison to this powerful low end but if you select material that has less low end- programs on iPlayer are a great example- the performance is detailed and tonally pretty accurate. The moment that the bass kicks in again however, it can all too easily dominate proceedings. When listening to something with some potent bass engineered in- and in this instance it seemed appropriate to dust off my copy of 2001- the result probably isn’t “hi-fi” but it is a lot of fun.

When you switch to high resolution material, the Solo HD does not respond as positively as some of the other designs here. Equally, using an external headphone amplifier does not substantially improve performance which reflects on their setup for mobile use. At the other end of the compression spectrum, MP3’s and AAC files keep the same basic behaviour down to fairly high levels of compression and the Solo HD is very forgiving in this regard. As with other models, you can use EQ software on the iPhone or a laptop to flatten the response a little but the basic character will stay the same.

The sensitivity of the Solo HD allows for easy use with portable designs. There is no need to max out the volume of an iPhone to obtain a good listening level. The microphone on the inline remote is also very good and the call quality is excellent. Listening on larger devices should create no volume problems.

In the same way that the Audio Technica is designed primarily as a home headphone, the Solo HD is the best adapted model in the group for use on the move. It is compact, robust and has a number of little design touches that make it a useful portable design. The sonic balance is well suited to use in a noisy environment as well. It is not really an all rounder though. For every track where the enthusiastic bass response is welcome, there are others where it is not. It is also relatively expensive although the branding is likely to ensure the resale value is good.