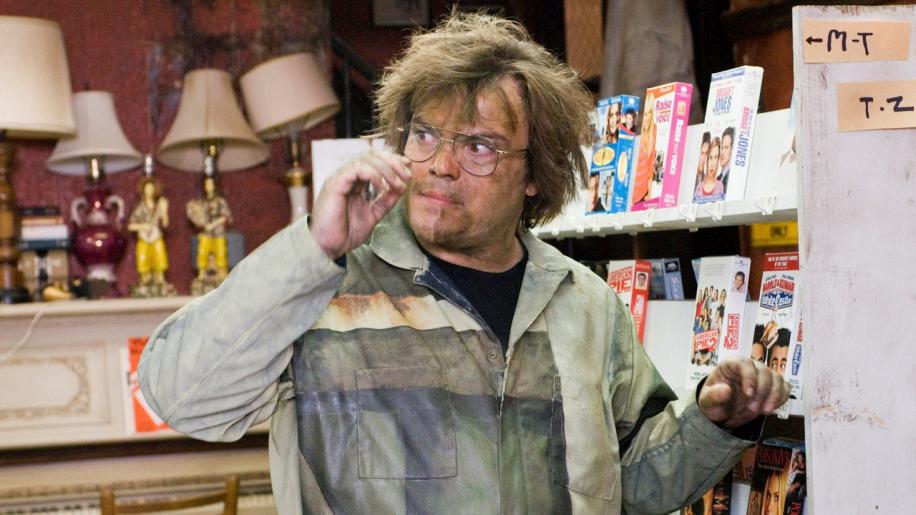 Frenchman Michel Gondry honed his skills in the music video world then wowed us all, well at least this reviewer, with the off the wall Eternal Sunshine of the Spotless Mind, a film which certainly drove a breath of fresh air through the whole fantasy/romance genre. Bearing this in mind I was perplexed to see where his latest feature would end up. A comedy based in an aging video store with current comedy flavour of the month Jack Black also at the helm.

Elroy Fletcher (Danny Glover) owns and operates Be Kind Rewind, a run down VHS rental store in the small suburb of Passaic, New Jersey; apparent birth place of jazz supremo Fats Waller. In the days of discs and enhanced competition from the larger video rental store further down the street, times are hard and now he is faced with a compulsory purchase order from the council to turn his ramshackle business into modern day apartments.

He leaves his assistant Mike (Mos Def) in charge whilst he goes away to commemorate the death of Fats Waller; he leaves strict instructions that Mike's friend, Jerry (Jack Black), is not to enter the store. Unfortunately for them all though he does and after an aborted attempt to sabotage the local power substation Mike becomes magnetized and on walking into the shop all the tapes are erased. Their only escape is to re-film the original movies on their home camcorder and hope the customers don't notice.

It's an intriguing premise for a movie especially for those of us who enjoy films so much. When Mike and Jerry finally realise what has happened the films they choose to re-film we have all seen before, Ghostbusters, Rush Hour 2, Men In Black, Driving Miss Daisy, 2001... the list goes on and on. It is this aspect of the movie which keeps us entertained for the middle section of the movie, how they approach their filming, what props they use and what special effects they come up with to add that final polish to the finished product.

Unfortunately though the beginning and end acts of the movie don't really live up to the comedic highs of the most enjoyable second act. The early part of the film naturally introduces us to the characters their own individual histories and the current reasons behind their plight. However as enjoyable enough as this is it's not that funny. Jack Black's character Jerry comes across as the mad cap of the bunch always thinking that his paranoia is due to his business residing under a power pylon and next to the local substation. It's mildly amusing as he dons a colander on his head to keep the micro waves out of his brain. This feeling, as all paranoia, builds until he's ultimately wrapping himself in tin foil. Whilst we feel for the other characters and the fact their lively-hoods are on the line with their business closed down you always just have to wonder why the store owner, Danny Glover, never made the move to more cost effective disc rentals instead of tape.

The third act of the film is in a similar vein. We revert back to the business being removed from the streets and what our three characters can do to try and stop this from happening. Their alternative films, or Sweded versions as they call them, are a big hit within the local community but will they and their connections with Fats Waller be sufficient to keep the wolves at bay?

It is this sense of community though which permeates this film. The rental punters flock back to the store to see these home produced versions and this perhaps is echoing the feeling within the larger viewing public. To these ends Gondry enlisted the local community in making this film and that in itself has to be applauded. After watching the extras you will be able to go back to this film and take note of all of the local residents who pop up throughout Be Kind Rewind. Like those residents though we are desperate to see something new, something which hasn't graced our eyeballs before and something fresh not just the latest incarnation of “Die Hard 17 - Die Some More”; it's what made Eternal Sunshine of the Spotless Mind such an interesting and engaging watch. Here Gondry with all his good intentions really isn't showing anything new at all, just the same old David and Goliath routine and the same Hollywood sugary coating wishing the little guy would win, but then in the modern PC world don't they always?

Cinematography is limited with no wide open glorious vistas as the whole film is shot within only a few sets, saying that though it never feels claustrophobic or limited and in the end suits the nature of this all too often gentile comedy. Acting is on par for this type of feature with Glover doing well and the ageing owner perhaps hankering back to days of old, Black does what Black does best just acting the mad fool and there's a pleasant interlude from Mia Farrow as the dippy customer who starts off the entire reason for Sweding these films. It has its moments there's no doubt about that and although in the main these come thick and fast during the Sweded versions of the films there are others there to keep you amused and amused enough to keep you entertained. Worth a watch.