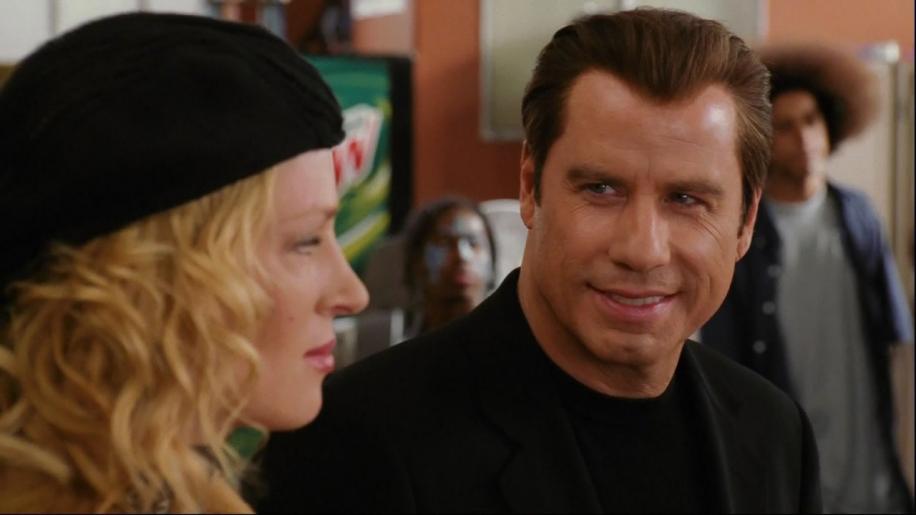 The picture is pretty good, boasting a nice clean print which is dust and blemish free. Colours are bright and vibrant throughout, especially considering there is quite a lot of red in some scenes, which can have a tendency of bleeding and blacks are deep and dark with only minor detail being lost in one or two scenes. Grain is not apparent during the movie and no colour bleed or artefacts were noticed. However, I did notice a slight blurring on the bottom of the picture during some scenes where the widescreen border is. It was infrequent however, but it was something I noticed which was a shame. Maybe it's just a print error, but due to this I have knocked a point off.

I can sum up the soundtrack for this movie in one word. Underwhelming. Don't get me wrong here - as I said in my Get Shorty review, it's a very dialogue heavy movie and the dialogue is clear and crisp. However - this movie is about the music industry, so you'd figure that sonically we'd have something with a bit more oomph? Well apparently not - it's essentially the same as the prequel, which for the dialogue isn't a bad thing, but I was hoping for more surround usage to give a more encompassing sound stage. The LFE does get a minor (and I really mean minor) workout when the gangstas drive up in their HumVee's and the music is pumping - but it was very tame in comparison to how it should have sounded. Other than that the soundtrack is fine, but it's just rather tame. Shame.

Kicking things off with “Be Cool, Very Cool”, a 21 minute documentary regarding the making of the movie. It's a little gushy in places, especially towards the director, but it's nice to see the talent seem, well, cool. It does have an element of standard EPK feel to it, but that's not always a bad thing. It's worth checking out for the segment on when the director lets the talent improvise a take of every scene, as it seems they really got a kick out of that. Next up are the deleted scenes, of which there are 14 and run for around 17 minutes and it's not too difficult to see why they were cut out! Not sure, but I could swear the tattooed guy is Eric Balfour, but I could be wrong. The Gag reel lasts for just over 7 minutes and I have to say, it's not funny whatsoever, which makes it an oxymoron as far as I'm concerned. The music video, is the music video of Elliot Wilhelm (aka The Rock) and is just, well, it's so bad but so funny and it may be me, but the “dancers” are so heavily made up, they could work at the makeup counter in Boots and The Rock, is just, well...funny. The 5 Close Up segments, regarding Dance Partners, The Rock, Andre 3000, Cedric The Entertainer and Christina Millian all run for around 4 or 5 minutes and feature on the aforementioned topics and artists. It's nice to hear their takes on the characters etc. but (as per the other features) once is enough. Rounding off the disk is the trailer for this, Get Shorty, Barbershop 2 and the Be Cool OST. Oh, at the start of the disk you get to suffer the trailer for Beauty Shop (and believe me, you suffer).

Well, it's not a complete loss, but it's another example of the rule that sequels tend not to be better than the originals. Style over substance? Well, possibly I guess, but it's more guilty of over egging the pudding with the number of stars present than anything else. Elmore Leonard may have written the book, but I can't help think the fact he doesn't show himself here is that he is all too aware that it's nothing but a poor rehash of the first movie. What made the first movie so great was the plot and characters, but this is way too familiar and nowhere near as entertaining. Has to be the biggest disappointment so far this year that I've seen.