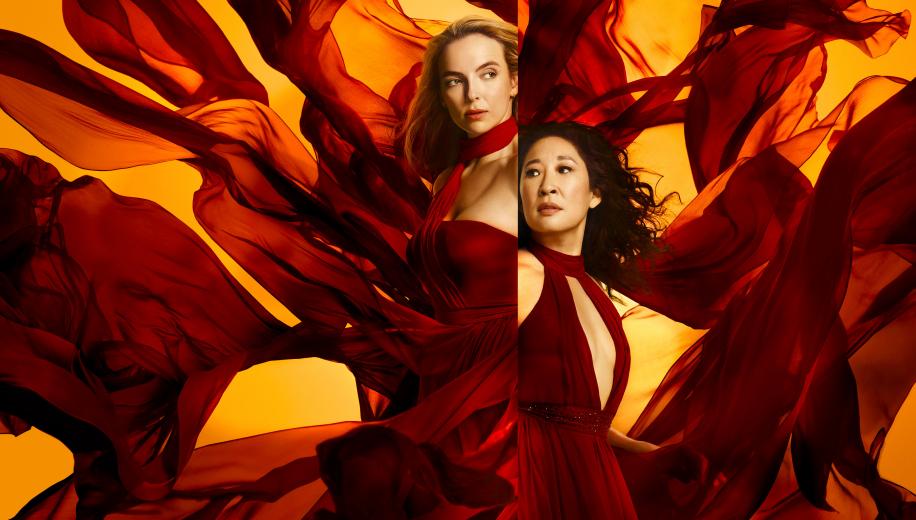 Returning for a third season, hopefully the quirky and darkly witty BBC spy thriller Killing Eve manages to set the excellent duo of Jodie Comer and Sandra Oh back on track.

Jodie Comer's Russian assassin, Villanelle, is a fabulously engaging modern alternative to Hannibal Lector, similarly pushing the boundaries of the anti-hero role, only here imbuing it with this wonderfully hyper-intense pixie psychopath quality that launches all predictability out of the window with a catapult. Equally interesting is her relationship with the gifted investigator on her trail, Sandra Oh's Eve, which brings in that love/hate quality which was again richly explored in the Hannibal TV series between Mads Mikkelsen's Hannibal and Hugh Dancy's investigator Will Graham.

Based on the Villanelle books by Luke Jennings, with celebrated writer Phoebe Waller-Bridge (Fleabag) behind the first season, Killing Eve enjoyed innovative 'kills' courtesy of Villanelle's colourful tactics and style (kind of reminiscent of the Hitman video games only with more humour), and some fabulous chemistry between Comer and Oh, who danced around each other in some kind of deadly tango which gave the show an edge above its competitors. Wittily drawn, excellently scripted and superbly acted, a more expansive second season - which initially had a few clever ideas like a rival assassin for Villanelle - eventually painted its will-they-won't-they relationship into a messy and convoluted corner, culminating in a perhaps unnecessary face/off that ended rather violently.

Season 3's premiere doesn't really take any risks, instead content merely to bring all of the players back onto the board in a believable way after last season's denouement, which is certainly not a particularly enviable task. Villanelle teases us with marriage, but soon gets thrown back into her calling - killing people with verve - whilst Eve recuperates working in a restaurant kitchen, but keeping in touch with Kenny, her former boss's son, who now works as a journalist for an online publication but keeps Eve involved in the whole puzzle to unravel: the mysterious organisation of 12, and MI6's seeming reluctance to go after them.

Hopefully this time they'll either kill each other for good, or get together once and for all, because the back and forth is killing the series now

Previous scene-stealers, Fiona Shaw's unapologetic MI6 chief, Carolyn (Kenny's mum), and Kim Bodnia's Konstantin - Villanelle's former handler - are both re-introduced, and the shock conclusion of episode 1 clearly sets the stage for Eve to be drawn back into a now quite personal investigation, even if it's less clear where her path will connect with Villanelle, despite the fact that we know it is utterly inevitable. Hopefully this time they'll either kill each other for good, or get together once and for all, because the back and forth is killing the series now, which has more to offer than soap story plot lines

It's hardly a conclusive start, lacking Waller-Bridge's memorable dialogue (even if Shaw's fish-and-chips conversation is superbly delivered) and perhaps even lacking a little imagination in Villanelle's kills (although this is made up for a little bit by her fun relationship with Harriet Walter's former mentor), but getting the job done nonetheless at bringing everybody back into this world for another go-around of international spy/killer hijinks, witty banter and deadly chemistry. Killing Eve is amidst the BBC's best dramas of recent times, but the jury's out as to whether it'll ever hit the lofty heights achieved by its excellent first season.
﻿