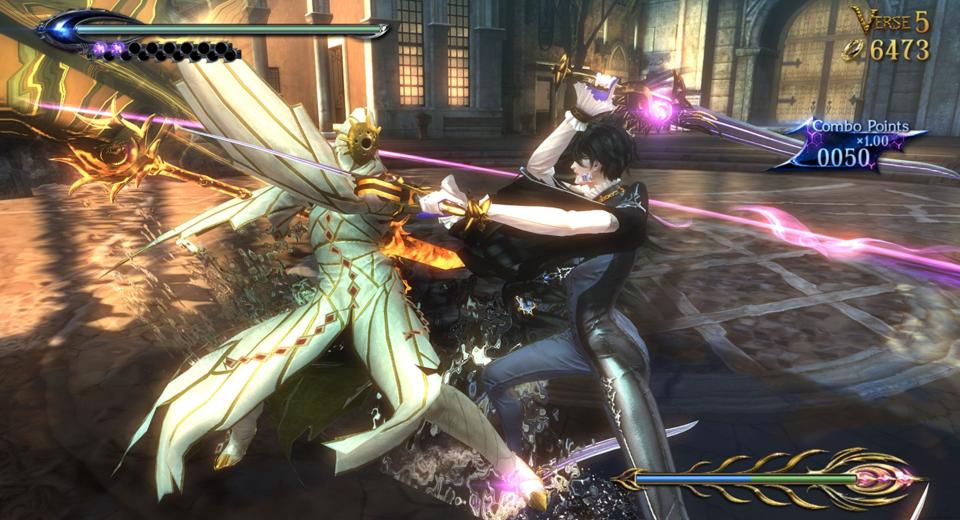 Bayonetta 2 is a game that shouldn’t have been possible, and yet thanks to Nintendo and the doomed Wii U, we’re being treated to a sequel that many thought would never happen. After all, Platinum Games’ original bore all the hallmarks of their traditional one-and-done masterpiece. It had best-in-class action systems, an outlandish visual style paired with a polarising lead character, sales figures that pleased the developer but not the publisher, and review scores to (repeatedly) die for. Years later, thanks to a deal struck between Nintendo, Sega and developer Platinum Games, the Wii U is now home to yet another console exclusive, and yet another title that pushes that little black box into the realms of a must-purchase. Bayonetta’s triumphant return comes in the guise of a storyline wrestled from the imaginations of several key members in the original development team. Complete with newly shortened hair and an expanded combat repertoire, our leading Umbran Witch must once more do battle with the forces of good, evil, and chaos. Her quest takes us from heaven to hell, through the side of several crumbling buildings, under the sea, onto the back of a dragon and the wings of a circling fighter jet above the New York skyline; and that’s just the first few hours. The rest is something you really, really need to see for yourself.

Such are the similarities in tone to the original game, you’d never realise that creator and director Hideki Kamiya wasn't at the helm for much of this project. The supporting cast of characters is drawn from Anime-style stereotypes that range from entertaining to ridiculously annoying (wait for the squirrel and you’ll know what I mean), but the presentational style remains a carbon copy of the original. Frequent cut-scenes bookend Bayonetta 2’s frenetic action sequences with in-engine storytelling, elaborate pre-rendered movies and comic-style storybook exposition, moving proceedings along at a fair old clip.

The final acts of Bayonetta 2 bring things together nicely, but be warned this is not a series for those of you looking for any kind of sense. Everything in Bayonetta's world is amped to the max. Characters screech and scream and spout ridiculous one-liners to each other while rifts of time and fantasy crumble and separate around them; playing cards slice through the very gates of hell; cherubic faces sit proudly atop spears, festoon the armour of various beasts and talk in a strange, ancient tongue. Some of your foes are fuelled by fire, some by energy, some by hellish slime, while others look every bit the human-built mechanical monstrosity. Each one is utterly, utterly glorious in motion. It's also worth noting that Bayonetta 2’s protagonist design is still cut from the exact same lithe, nimble and hellscaped Amazonian cloth as its predecessor.

Far from being a damsel in distress, Bayonetta is a strong lead. This is her world and she’s never far from being in charge, using her fantastical powers to dispatch - and frequently humiliate - the army of demons and monstrous creations that stand in her path. While there are a few moments of humility and personality that didn't crop up so much in the original storyline, Platinum is still very careful to never dilute the core of her character. She remains a fun, powerful and interesting person to inhabit in an action game.

But as with the previous game, while Bayonetta’s outfit and moment-to-moment combat animations support that personality, the leering camera shots are another matter. Maybe I'm getting older, but Bayonetta 2’s occasional obsession with crotch-based fly-bys is just, well, kinda weird. The cut-scene framing often veers into the territory of a teenager or Michael Bay, and as a 30-something male I can’t help but find it all just a little bit icky. Fortunately those moments are never enough to take attention from the action systems that underpin Bayonetta 2's success; this is a sublime game to learn, with moment-to-moment combat sequences that remain peerless. Sure, it has mechanics built upon mechanics built upon further mechanics, but they all interlock intuitively even in the midst of a frenetic encounter.

The same very specific combo-dodge-combo flow remains, but the visual cues, timing and variety of attacks are more clearly signposted in Bayonetta 2, making it a slightly easier prospect but also enhancing the sensation of expression over tired routine. Incoming enemy attacks are marked out with a brief flash of a weapon or a small pause in their animation, giving Bayonetta a small opportunity to dodge and activate crucial combo-building bullet-time. Building up enough of a combo then fills up her magic meter, enabling either a vicious punishment attack or a flurry of super-powerful blows to help clear the screen or dent a boss's health. At the end of each battle a series of combat gradings are then used to dole out monetary reward, with damage output, time and incoming damage taken into account.

Your spoils are once again spent at Rodin's underworld store, with new combat moves, weapon sets, accessories, costumes, items and meter-filling lollipops on offer. Mixing and matching those items is key to Bayonetta 2's level of challenge, with the huge variety of boosts, attacks and combat styles encouraging experimentation in defeat. It's testament to sheer variety that I found that experimentation necessary throughout. Enemy attack patterns are hugely varied in all of Bayonetta 2's sixteen chapters, with Platinum introducing new encounters right up until the end. On-rails flying levels and various other interludes pepper the experience and add a bit of surprise, while the boss encounters are amongst the best I have ever seen. Each gigantic beast or demon-on-demon battle has its own set of challenges, and a level of unique visual spectacle that only really brings to mind titles like God of War. Even then, you get the feeling that even Kratos might wonder as to which earthbound mind could possibly dream up this stuff.

And when you're done, there's plenty of good reason to go back through. A huge number of collectibles are strewn around each stage, offering snippets of back-story, extra health boosts, weapons, costumes and more. Escalating difficulty levels gate the challenge/story ratio nicely, whilst the co-op mode is enjoyable, if a little too frenetic to be truly worthwhile in the long run. Simply unlocking the full moveset for a single combat style will likely take players more than a single run through the campaign, but the action and sensation of improvement is so strong that Bayonetta 2 isn't likely to find a home on your shelf for too long.

While the Wii U isn't exactly short of high-quality exclusive titles, Bayonetta 2 nevertheless hauls itself close to the top of the pile. This is still the best action game in town, and while the lack of technical progression might disappoint some, there was always going to be room for a sequel in that universe.

Sure, other games have come close to matching Platinum's numerous flexible combat systems in the interim, but none of them can beat the sheer spectacle, combat diversity and tactile satisfaction on offer in Bayonetta's world. Visually it might not match the 1080p flash of the newer generation of consoles, but that locked 60fps and rainbow of a colour palette are a perfect match for its host system.

It'd be a crying shame if Bayonetta 2 didn't shift the needle at least a little bit on the Wii U's fortunes then, because this is a game that deserves, neigh demands, to be seen. The best action game of 2014? I'd say so.