Something for your suitcase, Sir? 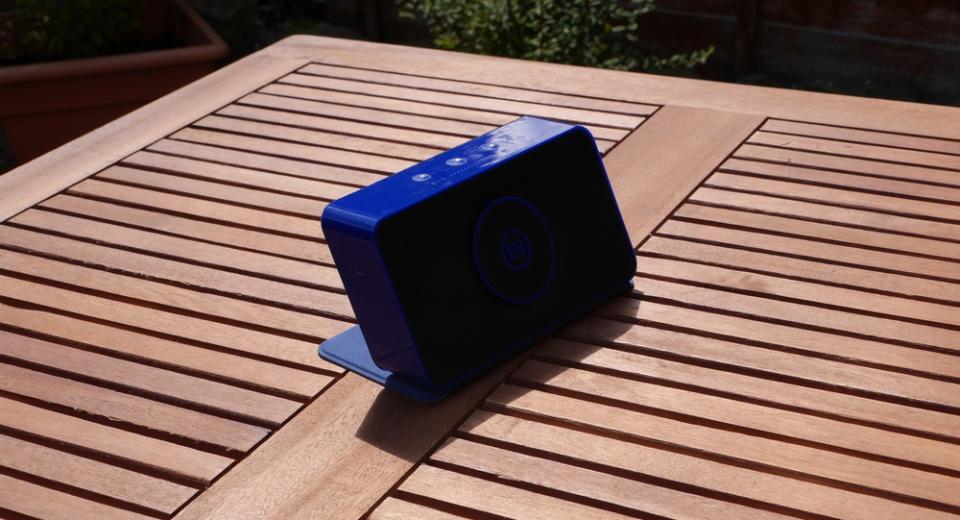 What is the Bayan Audio Soundbook GO?

That product is priced at around £250, which could be a little bit rich for some pockets when all that is needed is something cheap and cheerful for a holiday, or just occasional use. So its smaller stable-mate, the Soundbook GO which carries a more affordable £80 price-tag, might be just the ticket if it can deliver the goods.

The Soundbook GO is up against the likes of the, surprisingly-good-for-the-money, Toshiba TY-SP3 and Cambridge Audio’s impressive Minx Go in the sub £100 category, plus plenty more besides. Billed as ideal for parties, festivals and for taking away with you on holiday, can the Bayan Audio Soundbook GO earn its place in our suitcase?

The review sample supplied came with a blue casing and slip clover but it’s also available in black, red and white colour schemes. Much like many tablet cases, opening up the slip cover – which also doubles as a stand – immediately switches on the unit and confirmation of such comes from a series of small indicator lights on the top. Just above those lights are three simple control buttons for volume and power.

The internals of the Soundbook Go comprise of two 1-inch long throw neodymium drivers and a 2-inch passive radiator for the bass and the build quality feels reasonable for the price-point but the plastic casing is very prone to showing up fingerprints and the slip cover is something of a dust magnet. As befitting its status, the GO is very compact, measuring just 160mm wide, 88mm tall and 40mm deep, and it weighs just 480g so it’s easy to slip in to just about any carry bag. At the rear of the unit are a 3.5mm stereo jack and a mini USB port, with the former for hooking up just about any external source and the latter for charging duties. Bayan Audio does supply a USB charging cable but you’ll need your own plug, should you want to charge from the mains and not a PC or laptop.

If you have an NFC device, you'll be connected in seconds

Provided your phone or tablet is NFC (Near Field Communication) enabled, establishing a Bluetooth connection is as simple as touching it to the NFC logo on the back of the unit. Should your mobile device not be blessed with such cutting edge tech, a more traditional Bluetooth connection is initiated by tapping the middle button on the Soundbook GO until it flashes blue and then locating ‘Bayan SBK GO’ in your devices’ Bluetooth menus. If you’re sporting a really old mobile, you can of course just connect by wire to the 3.5mm aux jack. The Soundbook GO arrives partially charged but you’re advised to give it an initial charge of 12 hours to ‘run the battery in’. Following that, we found the unit takes around two and half hours to reach a full charge when connected to the mains and about three and a half from our Windows 7 laptop. Mileages will vary there and so will they in terms of how long the GO will sustain a charge but we found that by turning up our Bluetooth devices’ output to maximum and setting the Soundbook to a three-quarter level, we would get around 6 to 7 seven hours use from it.

Unlike its more expensive range-mate, the GO doesn’t feature aptX Bluetooth capability but it is version 4.0 so it’s light on power drainage. The in-built microphone means it can also be used as a hands-free device for voice calls but our experiments with this, using Skype from our laptop, indicate the mic isn’t the best although it’s OK when call quality isn’t a major concern. Our primary sources for music and audio were the aforementioned PC, along with a 2012 Nexus 7 tablet, via Bluetooth, and we also experimented with the 3.5mm input, in conjunction with a Galaxy S4 Mini.

This is a product that very much needs judging in context. It’s purposefully small so you can’t expect it to have any real sense of stereo but it does have an airy quality to it that at least gives it some notion of spaciousness. The little bass radiator is surprisingly effective at the low end, although the claims of a response right the way down to 40Hz are a little fanciful, but it does make a good account of itself with dance music and kicks out a decent sounding snare drum when required.

The Soundbook GO is very good with dialogue and kept us happy with a full day’s worth of coverage from the Fourth Test between England and India, and the numerous podcasts we listen to all sounded very clean and clear. The Soundbook GO has plenty enough volume available to be audible anywhere in an averagely sized living room and, outdoors, it can also go loud enough to fill a smallish garden and, further, to neighbour-troubling levels.

As we expected, it’s not very sensitive through the 3.5mm input, however, so unless you’re hooking up something with a vaguely decent output, it might just be a little quiet. Unfortunately, the majority of android phones and tablets are pretty weak here but it did sound much better with the output from an iPad 4.

Much like the X3, the signature of the Soundbook GO is warm and lively, which we think works well in the context of a travel speaker and makes it equally at home with acoustic music as it is electronic. As long as you go into the deal not expecting any spine-tingling moments, the Soundbook GO won’t disappoint and we found it a perfectly serviceable audio option, when on the move.

Of its type, it's a very good solution

The Soundbook GO is pretty much totally successful in its intent. It’s fairly inexpensive, very compact and portable and a doddle to hook up to your phone or tablet. The protective cover also doubles up as a stand for the device and a full charge should give you well over 6 hours listening before it requires more juice.

In terms of its audio output, the Soundbook GO certainly has enough to fill most rooms – or gardens – and the quality is probably better than you would expect when you consider the relatively tiny proportions. It’s not going to shake the floorboards or shatter any glasses but it sounded good with almost everything we threw at it, so it’s a great solution for music on the move and well worth sticking on your shortlist.

Residents in the UK don’t have to take our word for it, either, as Bayan Audio offers a generous 30 day home trial period, so they must be as confident at us that the Soundbook GO is worthy of a Recommendation.