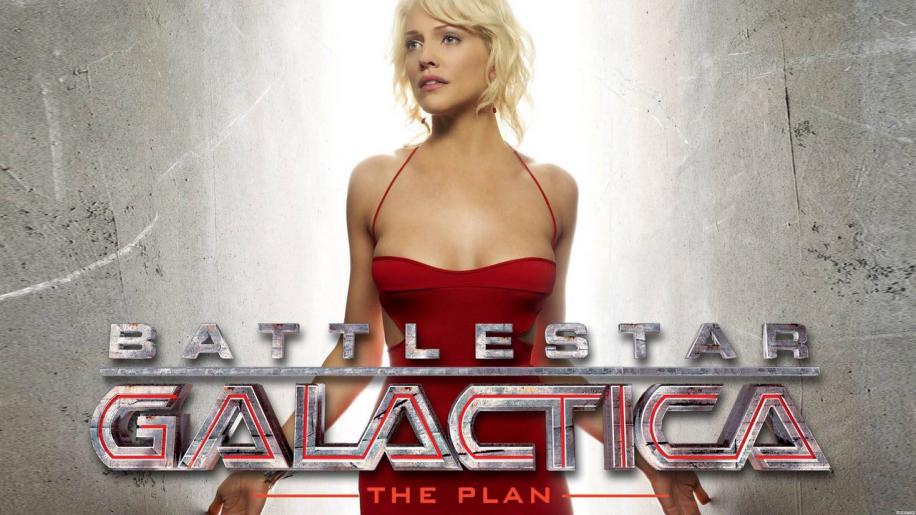 I have to say that I have struggled when trying to find a way into writing this review. The Plan, you see, is a massive spoiler for the whole Battlestar Galactica series. If you have not watched the series, then you absolutely most definitely should not be going anywhere near this disc. Reviewing it presents a challenge, and I have taken the route of doing so whilst avoiding any spoilers for those who haven't watched any of the show yet. This does mean that this review may be slightly less in depth than usual, but it will hopefully still provide you with enough information to inform you on whether to purchase or not.

Ron Moore, one of the creative talents behind Star Trek : Deep Space Nine (arguably the finest, and certainly the darkest Star Trek series), eventually left the franchise in frustration at not being able to tell the dark, ambivalent stories that he wanted to tell. He found the Star Trek Mythos too confining. When he announced that his new project would be an imagining of Battlestar Galactica, many were sceptical. After all, the series was a short running production from the late seventies that was famous for its cheese level. However, the central story was one that certainly was ripe for revisiting, and this is what Moore planned to do. Instead of just retelling the story, Moore's version was the perfect example of a reboot. It took the superb basic conceit of the original series and moved it on to a new level, whilst exploring the political and moral dilemmas familiar to today's audience. The fact that he was the one behind this series meant no constraints. He could make it as dark as he wanted to, and boy did he do so.

In Moore's reboot, the Cylons still destroyed the Human Colonies, and they still fled in a ragtag fleet to find a new home, but this time the Cylons were not only robotic enemies. They had also managed to rebuilt synthetic human copies, allowing dichotomies of emotion and feeling to be explored in a more interesting way. However, it wasn't really until the third season that the writers really began to explore the contrasts inherent in humanoid androids, and the conflict inherent in trying to eliminate a race that they themselves were modelled on. The contrast in the religious beliefs of the humanoid cylons and the ones of the humans that they were so successfully infiltrating.

Thus, after the conclusion of the series, The Plan was conceived. The idea was to go back and revisit the mini series and the first two series, where we did not know much about the Cylons. But this time, the filmmakers were going to show the same events from the viewpoints of the Cylons. The idea is to let us get a little more of a viewpoint into the mind of the Cylons, whilst also illuminating certain events from the early part of the main series.

That is about all you are going to get from me about the plot in this review. I just cannot risk spoiling it. However, the beauty (and the flaw) of this disc is just how well it does integrate into the universe fans know so well. All the characters from the main series appear in clips from the original show (except, mystifyingly, Roslin - she doesn't appear once). However, the appearance of already known human characters in new scenes is very slim. This mainly focuses on the role of John Cavil (Dean Stockwell) who is the mastermind behind the plot to commit genocide on the human race. We follow two of his models (if you have seen the series, you will understand) as they battle with the conflict within his own mind. He is at once a child, throwing his toys out of his pram (only his toys are nuclear weapons), and an adult (cold, calculating, and capable of the most terrible acts of cold violence). One scene is quite horrifying as he carries out an act that you would rarely see portrayed on screen, a casual almost understated murder that is horrifying simply because of its casualness.

It is the clever decision of the writers to focus on two of his models (one on the Galactica, and one on Caprica with Anders (one of the rare new performances by a member of the original cast). This means that the whole conflict inherent within the Cylons' psyche can be explored - and this is done superbly well.

The Plan, then, focuses on the more philosophical aspects that the show visited during its run. This doesn't mean, however, that there is a lack of action here. The CGI budget is huge compared with the show, and this means that we finally get to see the destruction on the colonies in all its “glory”. The imagination shown in these scenes of destruction is immense. Obviously the quality of the CGI is not up to a major cinematic production, but the imagination shown is certainly the equal of anything seen on the big screen. The result is quite disturbing and realistic, as we see the full enormity of events that have previously only happened offscreen. Charred human corpses, gigantic liners plowing into cities on a tidal wave, all this and more is shown with nothing being held back. We also finally get to see the other colonies other than Caprica, albeit briefly.

However, the focus here is not on action but as mentioned before - the conflicted Cylons. This means that those who disliked the more talky, philosophical aspects of the show are likely not to get as much out of watching this as they expect. There are some quite weighty issues debated here - as there were in the show. To me, the balance between action and drama is well-balanced, but I know that others have disliked this.

The direction, by Edward James Olmos, is most definitely assured. He quite simply understands the show, and believes in it - and for these reasons he was absolutely the right choice for directing this. He moves his camera with an assurance, and is not afraid to approach the universe we know so well from a slightly new angle. He elicits superb performances from his actors, with Stockwell in particular relishing the chance to delve more deeply into the psyche of his character. Every performance here is totally believeable - from the most major characters down to the extras. The BSG universe has always been a realistic one, and Olmos sticks to that formula here, showing great care that everything should be believable.

If The Plan does have one flaw it is a slightly choppy nature. This is to be expected considering the remit - to cover two whole series plus a three hour mini-series in the space of two hours. This can mean that events can sometimes feel a little bit rushed. It also means that if you have not seen the series a lot that happens here will make little sense to you. However, if you have seen the original series there is a lot of pleasure to be had here. You will find yourselves remembering key events that you may have forgotten, and revisiting little character beats that fit in with what you have learnt about them years down the line.

Is The Plan essential for those who have watched the series? Well, honestly I have to answer negatively. It doesn't cast any spectacular new light onto the events of the series, or answer any questions that may have been left dangling. It doesn't enrich your knowledge in any way, or provide any startling new insights. However, it does flesh out some of the events that we know so well - and show us things that have only been alluded to before. For this reason I would recommend this disc to those who have enjoyed the series - but it is not an absolute ESSENTIAL addition to the BSG universe.