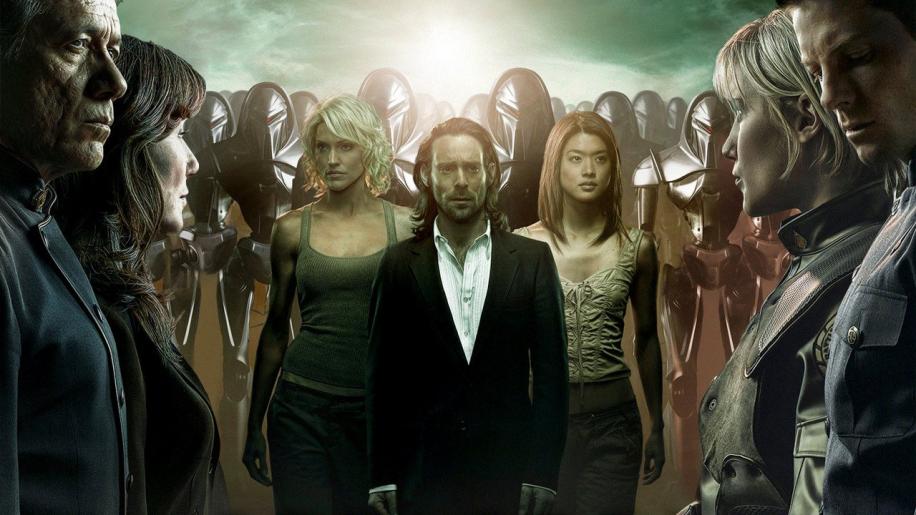 Presented in anamorphic widescreen in a 1.78:1 ratio, this isn't a bad transfer. We have no obvious artifacting or edge enhancement, with some very bold and vivid colours and deep black levels. However, the colours can be over vivid in some areas, due to contrast enhancement deliberately used to create a feel of an alien world, so one has to keep this in mind when reviewing. For the most part the image is nicely detailed, but again, it is a fast moving show, with fast edits as well, so things don't tend to stand still for long either. I don't have any real criticism, but as with another show I've reviewed, it still isn't quite in the top tier of transfers, but is perfectly fine. Again, it seems that the sound on most TV shows made in recent times has to have a Dolby 5.1 soundtrack and this is no exception. Dialogue is clear at all times, even when one actor clearly flubs a line, it had me reaching for the remote to verify he said his own name as opposed to the other characters. Soundtrack wise, it's all perfectly competent, but I feel it lacked any real oomph to proceedings - indeed where I expected a large amount of LFE, I received very little, which to be honest took away from the experience. Maybe next season they could put a little more effort into this area? Still it does what it needs to, just don't expect anything spectacular. First up, we have 8 featurettes which come under the heading of “Behind the Scenes”, starting off with From Miniseries to Series, which runs for 9 minutes and highlights the transition and continuation from the first disk (which is the mini-series that was aired) to the rest of the show. It's nothing particularly special, but it serves its purpose.

Change is Good, Now They're Babes is a 7min30sec featurette which addresses the issue of the characters, from Starbuck and Boomer now both being females as well as the choice of making more of the characters female, due in part to the original being so heavily male dominated. Of course, for those who are interested, there is plenty of Number 6 here.

The Cylon Centurion is a 5min30sec featurette that explores the changes made from the original series Cylons to the ones here, from men in suits to CGI characters, keeping certain similarities but changing them sufficiently, case in point, in this show, they don't speak for example. Short, but uninspiring.

Future/Past Technology is an 8 minute featurette which relates to the set and prop design as well as having not-so-subtle digs at Star Trek and the numerous spin-offs. It's not overly interesting, but I have to say that the snipes/references to ST were tiring (and I'm not a Trekkie either).

The Doctor Is Out (Of His Mind) is another 8 minute featurette relating to Guyus Baltar, the original shows villain who in this one, is both the protagonist of the situation they are in as well as some comic relief. Indeed, he is nothing like the original and yet we, the viewer are waiting for his complete evolution into the enemy of humanity. However, the feature doesn't really tell you anything you don't already know.

Production is a nine minute feature which relates to the production of the show from makeup and hair to stunt work. It's probably enlightening, but I found it quite tiring, as it seemed to retread other areas and offered nothing fresh or different to many similar features I've seen.

Visual Effects is another 9 minute featurette, which proceeds to tell us that they try and avoid the tradition Sci-Fi visual effects (like starship battles?) and how they integrate them into the show, however the guy who narrates this is boring and I almost fell asleep while watching it - not a good sign.

Epilogue is an 8 minute featurette which sums up most of the featurettes, from pointing out (yet again) that this isn't a simple remake of the original, but more an extension, re-working and natural progression based on how TV has evolved as much as ourselves, as well as pointing out how wonderful the cast and crew are. However, by this stage, I'll be honest I was quite sick of how circular the features were feeling.

Deleted Scenes contains 50 minutes of deleted scenes from the entire season, which don't further any plot and are clearly deleted for running time constraints.

Battlestar Galactica Series Lowdown is a 20 minute feature which basically outlines the series/season and answers a few fan questions. May I just say that Trisha Helfer looks much more glamorous and attractive here than as Number 6. It's ok viewing wise, but does give away a few series plot points, so best to avoid until after you've seen the series, as goes for the other features here.

Sketches and Art is our last featurette and is a 4 minute slideshow of artwork relating to the series, from set designs to other similarly related sketches.

It is also worth noting that 9 of the episodes have audio commentary tracks. My least favourite part of reviewing is when I have to review something that's already been reviewed by a fellow reviewer, especially when I'm not going to give it the glowing recommendation that they have. That's not to say this is a bad season, as this is quite entertaining, but it does have faults and it does raise a few concerns that it went out to be all guns blazing in its execution but could soon run out of steam, which would be a shame. Some of the characters need more fleshing out, as they are a little two dimensional whereas some are superb (Baltar and Boomer being the obvious two) and I think that this would help alleviate some of my criticisms, even if they brought the pace down slightly. Sometimes the hunt is better than the prize and that is what I feel drags this down, is that the hunt isn't quite long enough or balanced and the rewards are almost too quickly and easily dispersed - witness 24 which is reasonably fast paced, but takes a while (even 3 series) before we get certain payoffs. I look forward to seeing Season 2, it is early days however, but it isn't as amazing or earth-shattering as some would have you believe.