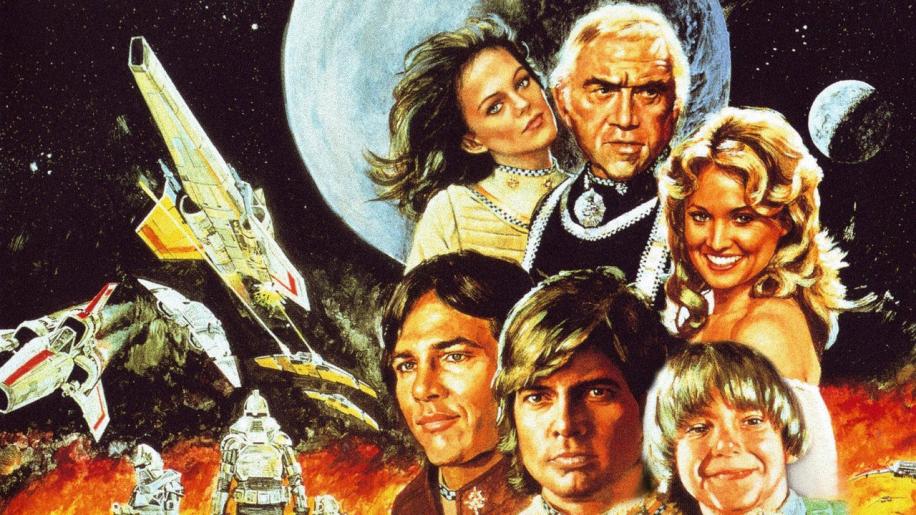 You have probably seen the score already. Yes that really is a 9 and yes this is a remake of one of the most camp sci-fi inventions ever. Yet, this “re-imagining” of the original concept is far more in tune with contemporary audiences than I could have possibly hoped for. For those under twenty five, here is the bones of what Battlestar Galactica is all about.

Humanity has, for some considerable time, grown out of its single planet origins and has begun to live elsewhere in the galaxy with twelve colonies spread amongst the stars. Where humanity originated is anyone's guess, that mystic place lost to the auguries of time gone. What is remembered is that humanity's technical prowess allowed them to built mechanical constructs called Cylons in order to make the hardships of life more bearable. Their AI was very advanced and it was not long before the Cylons turned on their creators and fought a bloody war for freedom. The halcyon time of prosperity devolved into a stalemate where no one was winning and everyone was losing what they held dear. Borne from this stalemate, a bargain was struck between Humanity and the Cylons. It was decided that the Cylons should have a planet of their own, away from the colonies where humanity could not find them. There, the Cylons could live out their lives as freely as they wanted. Should it prove necessary, a space station was nominated as neutral ground where, once a year, a representative from humanity would arrive to discuss diplomatic issues.

The Cylons never turned up, until now, forty years later. And they want a little more than a friendly chat over a pint of Guinness...

Looking back, Battlestar Galactica has aged badly. To make a faithful adaptation of that series in today's climate would be suicide of Andromeda proportions. No, the decision to change key elements of the original into this new series was a good one. The big change is not that Starbuck, which is a call sign rather than a real name in this series, is a woman (Katee Sackhoff), but the Cylon's change of heart - almost literally. This miniseries is almost entirely spent on the Cylon's return and the resulting chaos. We begin to truly appreciate what the Cylons are capable of and to what lengths they will go to, to fulfil their plans. Characters too are given a modern make over, appearing more believable, deep and in some cases seriously flawed. To paraphrase Ron Moore: there is no safe pair of hands in this series like Riker is to Startrek: Next Generation. Galactica's first officer is a functioning alcoholic. First pilot Lee 'Apollo' Adama (played by Brit Jamie Bamber) cannot forgive his father, and commander of Galactica, William Adama (Edward James Olmos) for some past tragedy and the good guys are seen to die. Character decisions like these, and there are a lot more besides, flesh out Battlestar Galactica into a true character driven series without falling into a morass of dull mediocrity like Voyager or Sliders.

In fact there are two mechanics that I can point to that make Battlestar Galactica a real triumph. Firstly, the “we are capable of anything” attitude the crew have. This is to be expected as producer of American Gothic, David Eick, also produces this miniseries. Fans of American Gothic's deeply disturbing character motivations will rejoice that they are fully present here and then some. The character of Baltar (James Callis) has been given some serious psychosis after he realises what is going on. Thoughts of guilt and despair gnaw at him and he continues to have episodes of mental trauma, seeing visions and talking to himself Golum fashion. There is, however, a scene, quite close to the beginning, which left me cold. We see Cylon “number 6” Tricia Helfer conduct something so calculating you have to wonder how it got past the studio. This scene will be with you as you try to figure out why she did it - for compassion because she knows what is coming, or morbid curiosity, or even jealousy. After that, you kinda sit up and take notice; these guys aren't joking around. Which leads me to the second thing. Everything is played by the book, and given a grounded earth feel. When someone is hungry, they ask for chicken pie. Characters are not called “T'pol” but William, or Laura. Ships fire bullets, not lasers, giving the few, albeit well done, dog fights in this miniseries a kinetic ambience that is lacking in most other scifi shows. Indeed, there is even a nod to that old convention of sci-fi - that sound exists in space. No, the battles aren't silent, but there is an odd muted feel to the sound (see Sound) which actually adds a sense of isolation to the pilots buzzing around in the enormity of space.

Of course, things aren't perfect. Some of the effects are a little ropey, though well designed and editorial omissions make some scenes jarring and inconsistent, even if they are explained in the commentaries. Strangest of all is Laura Roslin (Mary McDonnell) the Secretary of Education. To begin with, Laura Roslin has some serious issues and these are played very well indeed by Mary McDonnell. However, her character goes about things in the middle parts of the show with a cloying air of self-righteousness becoming a clichéd presidential ideal. Her decisions are always for the benefit of others, played with a deep sense of inner reflection as if she has had some epiphany that lends a wisdom beyond the others around her. It is all a bit too perfect. Even this bad point gets shaken up after a particularly harsh decision made by her reveals a more believable, humble character that stays with us until the end.

There is so much more to say, but I feel that I would spoil things for those that haven't seen the series, yet.