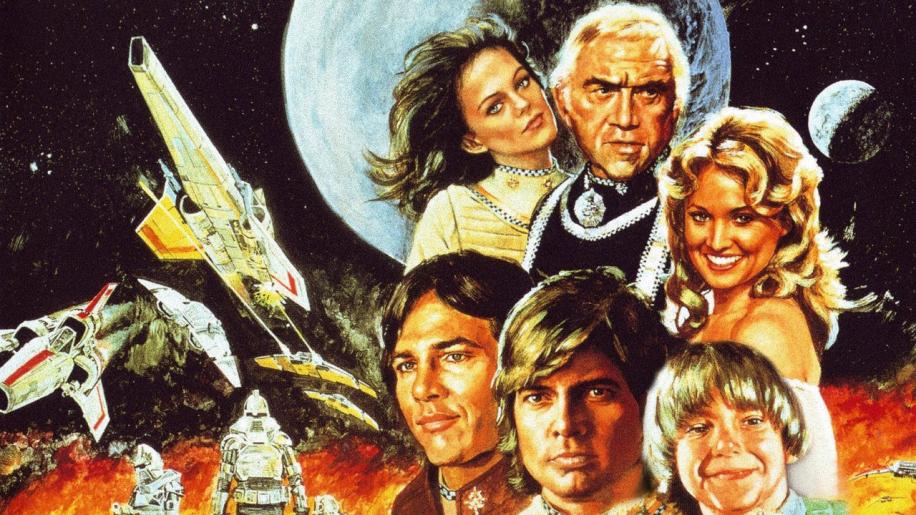 This new Battlestar Galactica is one of the best TV series ever made, no matter the genre. Hyperbole you may think but, if there is any series that you have been putting off, or just haven't thought about buying at all, this is the one to get. Now that's off my chest, and before I get to the review proper, a small warning:

***This review assumes the reader has seen the Battlestar Galactica mini series, and may therefore contain spoilers for those that have not***

A quick recap for those that don't know what Battlestar Galactica's premise is: Humanity created the Cylons as automated slaves, who had AI in order to complete their tasks more effectively. After some time, they turned and war broke out. Eventually a truce was called and the Cylons were outcast to a far, distant world. Everyone thought the Cylons gone until Gaius Baltar (James Callis), tricked by a Cylon in human form, allows the Cylons to disable humanities defences. All twelve colonies are wiped out in a fierce nuclear bombardment that leaves only one Battlestar warship and fifty thousand humans alive, running from a vastly superior Cylon force. Humanity has been all but wiped out, everyone is on edge, no one is firing on all cylinders, Cylons now look like humans, every one is a target and still the Cylons keep on coming. Little House on the Prairie, this is not.

So, the story of season 1 kicks off with episode “33” more or less straight after the miniseries ends (this means that you will need to have watched the miniseries first to get a true handle on what has occurred, though the “Previously on...” intros are unusually concise). The Cylons have hunted the last vagaries of humanity since their escape from Caprica. The fleet's only hope is to jump into random areas of space using the Faster Than Light (FTL) engines in order to lose their pursuers. In fact the Cylons seem to home in on the humans every 33 minutes, leaving the fighter pilots without sleep for over 130 hours. Jump after jump, the crew and civilians are steadily being picked off, until one of the big cruisers is left behind. 33 minutes pass, and the Cylons have not re-appeared. Why? Are the Cylons massacring those left behind, have the stray humans jumped to another spot leaving the rest of the fleet free at last?

“33” is an explosive start that really does open your eyes to the fleet's predicament. Every nuance of whether such and such are Cylons, the paranoia, the determination and the all out action of dog fights are touched upon in this first episode. By leaving out re-introductions to characters, more time is spent on plot development and it shows. Not one of the fourteen episodes is poor, with over arcing developments wrapping the viewer up in a totally believable milieu alongside discrete plots of less that a few minutes. The weaknesses and strengths of each and every character are explored in a homogeneous world, where the consequences of one episode are carried on into the next and beyond. Indeed, in a rather unique turnout for the books, the group of fragile humans packed into too few transports really do appear to be on the brink of disaster, and aren't guaranteed to have the solution to everything.

If anything, it is the vision and audacity of the writing that hauls BSG form the mediocrity of most SF. I really cannot stress how well the various plots are woven together. For example, in some series, comedy moments are fulfilled by a particular episode, or by a character that happens to be funny. In BSG, the psychoses, well timed events and character interaction allow comedy moments to organically develop. In BSG, people make tough decisions and people do die because of them: people are flawed, people make mistakes people do not have all the answers. In BSG, people are human.

Yet, in what can sound a rather oppressive series, BSG manages to excite with wonderful space battles, intense scenes of escape and some real moments of anxiety and shock. The action scenes are very well done with ship to ship dogfights standing out. They have all the intensity of Battle of Britain, along with the unlimited imagination of a sci-fi setting. Quite frankly, it doesn't look like BSG can put a foot wrong. Even the ending lives up to expectation, with a clever emotive annulment that never feels forced or over simplified. It makes the dues-ex-machina copout of new Dr Who appear to be the childish contrivance it is and if that seems overly harsh, it is only because BSG has raised the bar so far ahead of the competition nothing else is close.