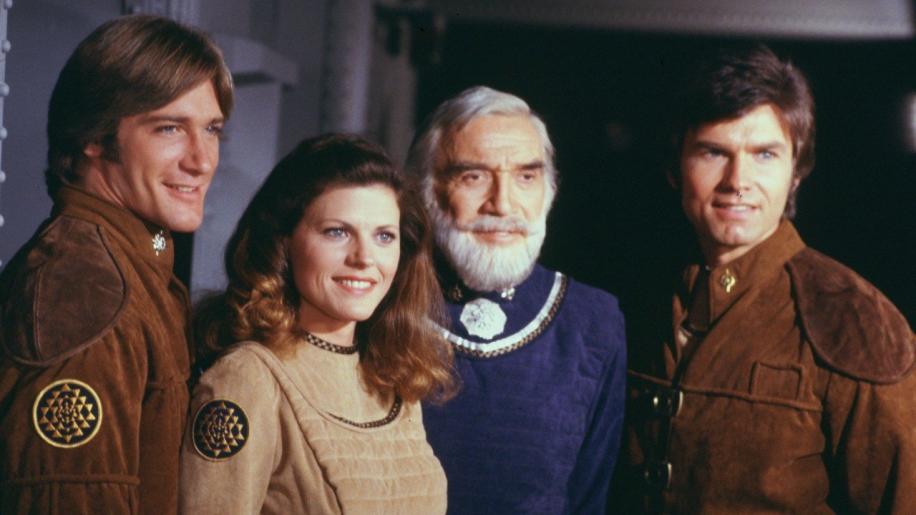 Think circa 1978 T.V and you can imagine the quality of the image on offer. No real effort has been made on restoration and consequently the viewer is “treated” to a collection of distracting scratches, and granular fuzziness. Special effects are courtesy of airfix and Blue Peter. Explosions look like particularly vicious sparklers. No, if you buy this disc it will not be to demo your new HD plasma or 8 foot wide projected image. In a word limited. If I had to add a second word woolly would be a good one. You get the occasional whisper from your subwoofer, but the windows are safe. Dialogue sounds like it was recorded through a thick layer of fibreglass. No, if you buy this disc it will not be to demo your 10 speaker set-up. Not much here. Unusually the extras are provided on side two of the disc. Side one contains the movie and a few pages of production notes and cast bio's. Side two has promotional adverts for the new series of Battlestar Galactica, which looks really cool, and adds the twist that the Cylons, instead of being big silver robots, are artificial humans along the lines of synthetics in Bladerunner. There is also a 5-minute production video for the inevitable video game - which also looks surprisingly good. The feeble package is filled out with three promos for newly released DVDs. Although the feature is less than 100minutes long, it took me three hours to watch this movie, due to the fact I fell asleep on 2 occasions. This has clearly been released to coincide with, and promote the forthcoming video game and TV series. Give the film a miss and buy the video game. It will probably keep you awake and interested for longer, and the graphics and sound will certainly be superior.