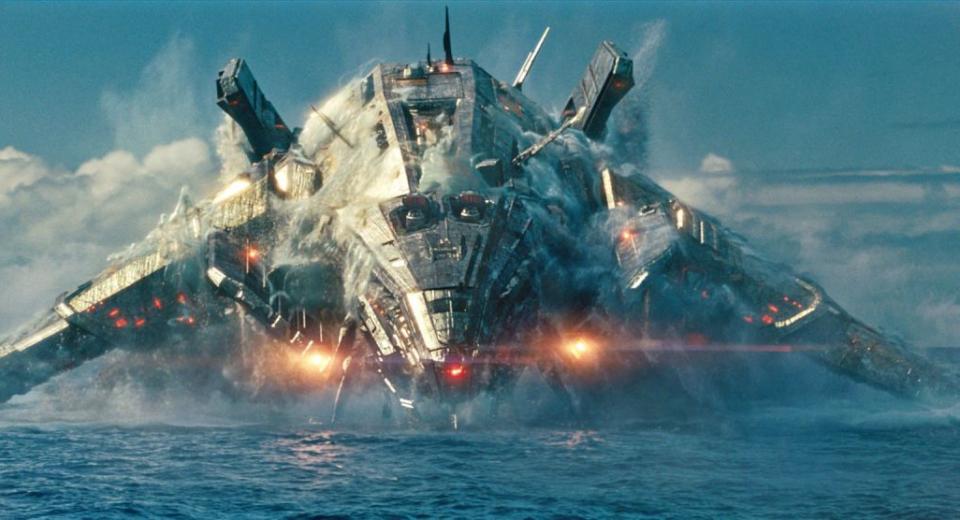 Who doesn’t remember playing Battleships as a kid? In fact some of us might have played it a little more recently than we would care to admit to! Of course, basing a film on a game or ride is nothing new. Pirates of the Caribbean was based on a water ride and the first couple turned out quite well. The similarity between this film and the game takes a little digging for, but at least it does not dominate the film.

So, we start with a slightly dodgy plot line and to be honest the script does not get much better. The basic idea is we try to communicate - with aliens, they hear us, turn up and start chucking their weight around and then some American heroes wade in to save the day. Add some sentimentalism and a few gallons of American pride and you have the making of this year’s big budget action movie. The good news is that the humour you need to carry off some of the dafter aspects is there and as Brits, we can sneer with genuine insincerity at it all and sit back and enjoy the action.

The film opens with an introduction to a couple of the main characters – the Hopper brothers. The older brother is the serious career Navy officer. He is trying to drag his little brother onto the straight and narrow, but he is more intent on having a good time, womanising and drinking. Actually, come to think of it, that sounds just like Navy life, so maybe he will fit in just fine. What is not so clear is how this thieving, vandalising felon ever got into the Navy, let alone became 3rdin command on a Navy destroyer. Whatever the reason, it seems the love of a girl – who also just happens to be the Admiral’s daughter, has dragged him out of the gutter and is threatening to make an honest man of him – just as soon as he can pluck up the courage to ask her daddy for permission to marry.

So far, so formulaic. The bumper book of Hollywood scripts has been well raided and you might well spend your time noting which plot point came from which film. This film took a panning before anyone had even seen it for some of the casting decisions. As well as a smattering of well respected names – Liam Neeson as Admiral for one, there are a few celebs including Rihanna as a ball busting gung ho action girl and a platoon of genuine Navy war heroes, including a legless Colonel. The inclusion of the latter caused an extremely mixed reaction. Gregory D Gadson is a real life bilateral amputee and is also the highest serving American officer. What is surprising is that he is also a convincing actor, even if his role has been a little shoe-horned into the movie.

Having established who the main players are, we magically move forward a few years to find both brothers doing rather well in the senior service. Big bro (Alexander Skarsgard) is now a commander and little bro (Taylor Kitsch) plays err… battleships in the targeting suite on a similar vessel. During a joint exercise he falls foul of the boss again and his career is not for the first time, on the line. He has just one last chance to prove himself to the Admiral and hence, have a chance to hook his daughter. Fortunately fate throws a few alien ships at him. One of them crash lands for the sole reason of justifying a big action scene while the rest take up residence just down the channel from Pearl Harbour. Trapped inside the mysterious force field, the brothers are seemingly all that stand in the way of world domination. Unfortunately the brighter of the pair is soon dispatched to Davy Jones and meat-head little brother has to do some rapid growing up, but not before his temper has caused the destruction of another ship and half its crew. We are expected to believe that there can be no real assistance from Hawaii, despite it being within the force field and one of the most militarised islands in the Pacific. Convenient then, that the entire operational fleet has popped out for manoeuvres, leaving just the museum battleship Missouri still in port. At this stage we must mention the geeky scientists who we have to blame for the whole shambles. Having sent the signal to a planet they think could support life, they seem woefully underprepared when ET shows up. It is also their fault that the aliens have targeted Hawaii, as this is where they chose to build their transmitting station.

So what does Lieutenant Hooper’s girl do when she is not trailing off his arm or setting up opportunities for him ask Daddy for her hand in marriage? Well, it turns out she is a physiotherapist at the rehab centre and of course that brings in the severely disabled soldier. Fate deals another card and they just happen to be on a nice hike up a mountain when the aliens come to call. Good, we might need them later to help duff up a few lizard men.

I hope by now you are getting an idea of just how banal the plot is. The good news is that the special effects and non-stop battle action make up for it to a certain extent. I love that the alien ammo looks like oversized pegs that you used to put into the playing board on Battleships and the sequence where the good guys seek and destroy an alien ship or two on the “acoustic grid”, it has been designed to look a lot like the playing surface we know from the board game.

By now, all the original ships are a little the worse for wear. The last one sinks below the waves Titanic style, with the good guys hanging off the stern. You will be waiting for the “I won’t ever let you go” line but at least the scriptwriters stopped before they got too carried away. So what to do? All that stands between the aliens and the beleaguered human race is a handful of soggy matlows. Of course! There is an old Battleship lying in the harbour, it just needs a crew and firing up – if we ignore replacing all the missing parts and re-commissioning the weapons, a task that took over two years the last time it was attempted in the 80s. Enter the veterans. They descend and soon have the old girl ready to fight again. Lt Hooper seems to have found his second wind and back off to sea they go. Of course, a battleship is harder to sink than a destroyer (It needs more pegs) so the odds are stacked a little more in the good guy’s favour. The outcome of the film is assured and we can all live happily ever after… Except of course now they know we are here, they might come back… Oh, and do make sure you watch to the end of the credits for a wee twist in the tale!

For all my fun poking, it’s not a bad film. It has been made with care and the sound and visuals are on the whole pretty good. The story might be silly, the sci-fi not in the least believable, the characters two dimensional and the plagiarism totally blatant, but the pace is spot on and none of the faults are particularly offensive. The use of plenty of Navy extras – both current and retired adds a certain level of realism and by shooting on various ships, the setting is great as well. For a couple of hours of guilt free easy watching, it passes the time.

This counts as one of the better action movies, even if it scores low on any other scale. Worth a look but not too deeply!