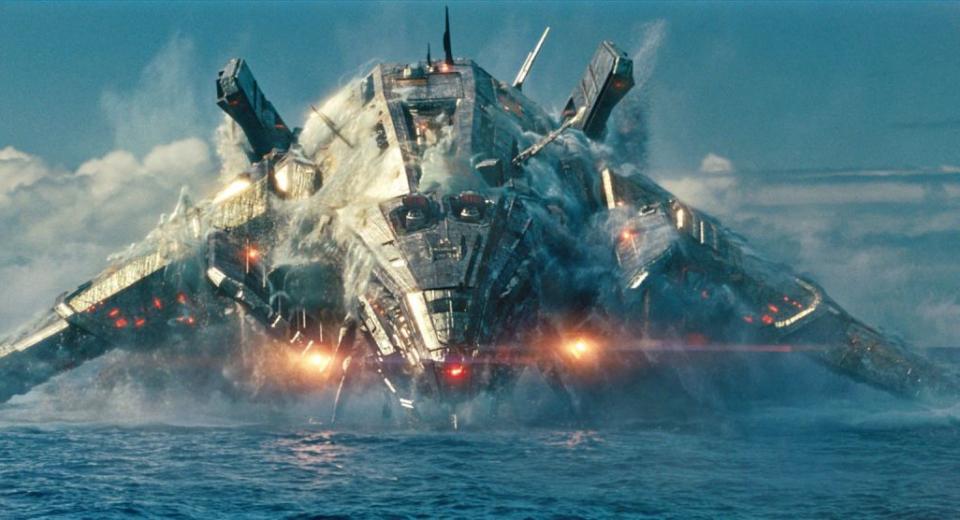 Filmed mainly on 35mm, the movie delivers the clean, bright images we associate with major releases. Film grain and the slightly muted colours look very military with a grey blue tinge to the sea borne scenes. There are a few shots filmed on board various vessels that look as though the exposure has had to be tweaked to recover a shot and this has led to a little solarisation. The quality of the set dressing and special effects are very evident with very few fudges visible. The AVC Mpeg 2,35:1 transfer is first rate, with virtually no artefacts visible, even in the busiest scenes. The action is frenetic and fast moving, so any motion issues on your system will become instantly apparent. The disc is quite slow to load if you are connected to the internet, as it wants to download new previews. The resume feature and ability to save favourite scenes is quite common on Universal Pictures releases and is well implemented here.

Loud and Proud! There is nothing subtle about the soundtrack. Lots of cool rock tracks blended with the usual if forgettable orchestral score. Explosions are deafening and fully exploit the DTS-HD MA stream. The rear channels are at times somewhat light on content, but when they do spark up, it’s well steered and precise. Dialogue is clear throughout and does not get buried even in the biggest moments. The LFE channel is used to the fullest extent and is well controlled right down to the lowest frequencies. My only niggle would be that it is a bit bass heavy at times, almost bordering on the boomy. A good workout for your system and one that will identify any weak points.

A comprehensive set of extras make up well over an hour of behind of the scenes footage and interviews with cast and crew. They are good fun and well produced. Of particular merit is “Commander Pete”. This follows director Pete Berg as he directs the film more like a rock star than a major stakeholder in a multi-million dollar enterprise. The VIP tour is a “Discovery Channel” quality documentary tour of the USS Missouri. If you like a bit of history, this makes for great viewing, even if it does blow a few holes in a various plot points, including the scene in the movie where the team moves a huge shell by hand, when actually just above their heads was a fully operational crane track designed specifically for moving the heaviest items around the ship! Taken as a whole, well worth watching and up to the standards we now come to expect.

The main thing that lets this film down is the lazy and predictable plot. In most movies, a poor script will kill it dead. In this case however, the realistic settings and massive special effects kind of makes up for it. You do wonder if the inclusion of war veterans with missing limbs was worth the backlash and many purists will sneer at the lack of realism and misuse of military hardware, but that is missing the point of the film. It’s a fun, high octane action adventure that does not take itself too seriously.

Technically, this release has been made with care and is all the more watchable for this. The soundtrack is very good, clean and well produced and the visuals look fantastic. The use of lots of handheld camera might not be to everyone’s tastes, but focus and framing is well controlled and I did not find it a distraction.

One to buy to watch and keep? Just maybe if you can get past the lack of a sensible storyline.