An impressive iteration on the Battlefield formula which lacks polish. 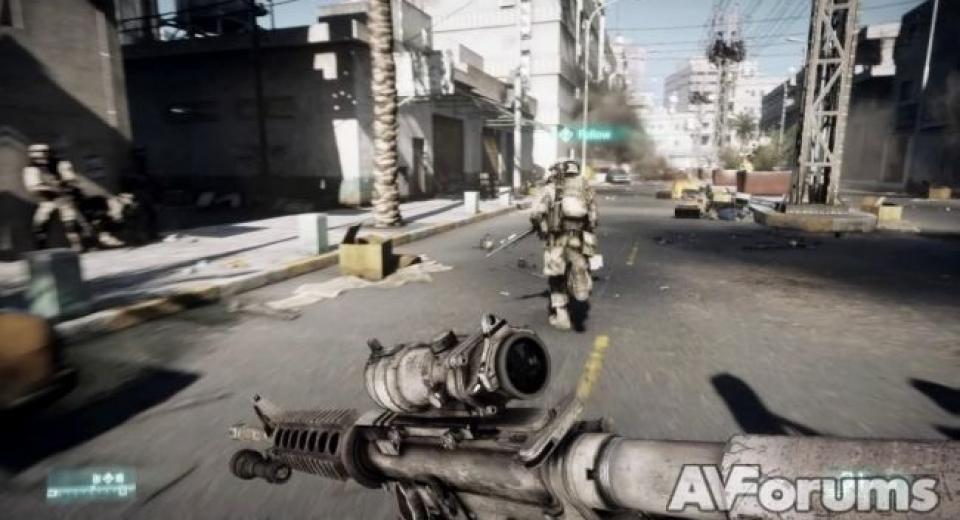 As Battlefield 3 (BF3) loads up for the first time with its flashing logos made of static and electronica pulsing from the speakers it’s notably different in tone to the bright menus and catchy piano keys of the Bad Company spin offs. Although we have had several releases with the Battlefield name, fans have been waiting since 2005 for a true sequel to Battlefield 2. Bad Company was created to appeal to the console audience and with two successful releases and a now established player-base it’s time to see what DICE has learned from those diversions and how this will affect this main entry in the franchise. Rather than side step the elephant in the room I would prefer to look it directly in the eye. This is DICE/EA brazenly trying to steal Call of Duty’s (COD) crown and while the titles are in fact actually quite different when played, the Battlefield vs Modern Warfare buying decision is one many gamers will be making this year. The influence is immediately apparent when loading up the single player. A heavily scripted linear ride gets underway which aims to create a realistic representation of modern day combat. You’ve seen this plot before, I'm confident that if I were to say, Middle East, interrogation flashbacks, Russia and nuclear weapons that you could piece together a good portion of the story without even touching the controller. Single player FPS campaigns have a reputation for often being little more than a safe training ground for players to cut their teeth on before being eaten alive in the world of multi player. BF3’s “Campaign” is the new poster child for this; in fact I would have cut to the chase and simply called it “Training”. Instead DICE preferred to imply this by making multiplayer Disc 1 and relegating single-player to Disc 2, letting you know where their priorities lie. The opening literally sends you down a tunnel allowing the player to charge forward recklessly and fire all manner of weaponry like they might be expecting, but once that treat is over the default form of squad based combat is introduced. As a result the gameplay slows down significantly and aside from a few intense first fights you are largely following explicit orders from your squad leader. It certainly retreads a lot of familiar ground, however the approach it takes is of a much slower pace and includes a large dose of realism. Dice know many COD players will be playing BF3 and seeing if it can match up to the incumbent FPS. They also know many won’t be aware the COD multiplayer experience is vastly different to the Battlefield one and therefore it can be a akin to being pushed in at the deep end. They employ single player as a float for newcomers to use until they get used to the deep waters. By the time you have finished the campaign you will have experienced a good cross section of what the Battlefield experience can offer, air combat, tank missions, sniper cover and close quarter combat are all featured. If all goes well some of those “bad” habits such as pushing forward at break neck speed and firing first and asking questions later will have been ironed out and you will be familiar with the mechanical dissimilarities that make Battlefield an inherently different experience such as recoil and bullet drop. The much vaunted visuals are impressive, whilst they may not live up to the cheeky PC engine trailers that DICE have been using to blow minds in the pre-release promotional material, they are still up there with the best the consoles have to offer. Lighting and particle effects create believable moments like rockets flying down tunnels with a flash of light and trail of smoke, while improved animations allow characters to shift weight and vault objects in the environment realistically. Audio however is better still with weapons sounding uniquely satisfying and impactful, operational chatter delivers accurate exchanges giving a great feeling of a larger operating theatre. With the high attention to detail it’s easy to get lost in the presentation of it all.  If you need further proof of DICE’s priorities, the single-player is plagued by several bugs which feel like they were pushed to the bottom of a to do list, from looping cut-scenes to massive dips in frame rate there is a distinct lack of the polish we have come to expect from a game of this calibre. Similarly some of the standard gameplay simply isn't as refined as you would expect. Friendly AI will play the part but leave most of the heavy lifting to you apart from when they deem it appropriate to step into your line of fire. Fire-fights frequently end with you searching for a single enemy who may be stuck behind cover who needs to die for the scripted ride to keep going, and whilst in the vehicle section the HUDs make sense, it's disappointing that in the name of further immersing the player a more elegant solution wasn't devised to convey way points and the standard HUD information. It is apparently preferable to “leave them wanting more” however when I put my controller down after just over 4 hours play on Normal difficulty it’s hard to not feel short changed. Not simply in length but in something much more disappointing; ambition. When Battlefield 3 is at its most interesting it’s usually because the sense of immersion is greatly increased, performing pre flight checks and taking off into air combat, accompanied by spectacular sounds and believable dialogue was a true pleasure which was over far too soon. There were several such moments in the campaign where DICE have the player in the palm of their hand. They spent much time building tension with stealth, atmosphere with visual and audio flair but then squander it by having generic QTEs, zero character progression and a plot picked from a bag of rejected Tom Clancy scripts. If one thing should have remained from Bad Company it should have been the strong characters and the not entirely generic plot. Once the credits start rolling and you realise they aren’t joking it’s time to see if the sacrifices made in single-player were in vain or whether multiplayer has benefited from the extra focus. Battlefield remains a tactical first person shooter with emphasis on vehicle combat and teamwork. Concessions have been made to accommodate the status quo of all out carnage however fans of Bad Company should quickly get to grips with the multiplayer experience. Set in large maps with all manner of destructible environments it still allows for many of those series defining Battlefield moments. Watching a jet hit the ground as a pilot jumps out just before their fiery death, manning the turret in a helicopter while a competent pilot hovers lining up targets or planting C4 onto the front or your vehicle before driving it into a group of enemies and detonating are all just as fun as ever and the improved graphics and audio give everything a tangible sense of weight and believability. The learning curve remains steep and playing “lone wolf” is certainly the hard way to approach it. Firing weapons and increasing your individual skill is the main objective of most FPS games, here it’s entirely possible to not fire a weapon and still succeed, become a medic and concentrate on healing and reviving your squad, specialise in air support and master perfect flybys in Jets and Helicopters or break out the mortar and make it rain with pain. Options like these give it more variety and different ways for you to compete if you aren’t very good at, or simply get bored of, the standard shooting mechanics. For its big console push Battlefield comes with many changes; some subtle but several fundamental. Removing some of the series gripes and making a few concessions to bring it in line with the modern trends. Health now eventually automatically regenerates, prone returns, the assault and medic classes have been merged and vehicle spawning has been greatly streamlined. Mechanics like spotting enemies and suppression bonuses give even more ways to score points. Weapons and upgrades can now be unlocked and equipped mid match and now even the vehicles can be levelled up with unlocks to make you even more deadly. Most of the changes are the sort of thing you would expect to see in the next iteration of a major franchise. Where it gets a little more divisive is with things like map design, which has a distinct split between the large sprawling environments the series is known for and the much more close quarters style of maps like Operation Metro. Series veterans may be frustrated with the lack of options on these maps as they tend to be more infantry based and require less strategy than something like Caspian Border. This split focus is accompanied by the return of the server browser allowing those with preferences for either style to customise their experience. Here you can filter your game search to only look for games of the series staple attack and defend mode Rush or just the territory based battles of Conquest. You can also filter by location, number of players and map preference. The theme of customisation runs through the multiplayer from the myriad of game play options, the mountain of scopes, attachments and firing modes, down to simply creating your dog tags, you can customise Battlefield to your play style. Whilst the standard shooter holds the gamer's hand, Battlefield 3 grants a level of freedom and choice which can be daunting and no doubt overwhelming for some, but those that are able to pick a path through the chaos will find a potentially more rewarding game within. Such freedom and scope however comes with its compromises, much like single-player, multiplayer has its own set of issues with oversights such as being unable to edit your class in the giant gap between matches but then racing to do it before the round starts, being unable to quit out of a lobby at the end of the match without waiting for the next game to load and being able to clip through objects when prone. These and many more issues like them can make the multiplayer a tedious affair when it needn't be. The now standard co-op element exists with two players playing through a short campaign of missions, working together as the pilot and gunner of a gun ship, or covering each other whilst trying to complete an objective; whilst the theory may be fun, the short 6 missions and an eye brow raising difficulty spike makes them hard to get into. Battlelog completes the social elements with kitchen sink stat-tracking, community platoons and the battle feed keeping you up to date on all your friends' progress. Battlefield 3 reminds me of comments I used to read on my report cards when I was younger: "Lacks focus", "Needs to apply himself" and "Has potential" all come to mind. DICE clearly have no interest in a single-player campaign and yet with what seems like minimal effort they have shown they have the ability to create something worthwhile.  Trying to keep up with the Joneses has distracted them for the worse and is frankly unnecessary. The multiplayer core experience remains a worthy tactical alternative to the competition and continues to include that special sauce which makes for an unpredictable yet satisfying experience if you can get past its growing pains.

Battlefield 3 delights the senses with spectacular presentation and the trademark gameplay which has been well refined for consoles. This multiplayer focused package looks to defeat the giants of the genre, but a disappointing single player and a notable lack of polish mean it remains a worthy tactical alternative rather than an actual replacement.