"So today's lesson is... you kill each other off until there's only one left." 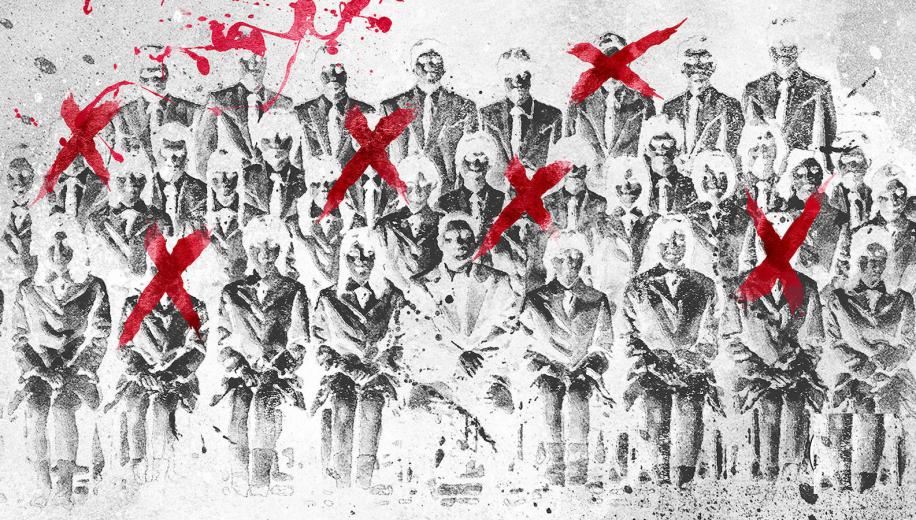 Although newcomers may find the lite version - The Hunger Games - robs this 2000 cult classic of some of its originality, it's still got some bite as a no-holds-barred survival horror... with school kids.

Twenty years ago and Battle Royale was quite something, with a relatively young cast playing teen victims forced into a fight-to-the-death contest on an island with their classmates. Wrapping it up in a sociopolitical package, the film suggested a future where society was in a mess which was largely blamed on out of control youth, so every now and then a class was picked and sent to "Battle Royale".

It was clever, and it was unforgiving. Best friends could turn on one another, the seemingly weak could transform into rabid dogs, whilst the secretly psychotic - or damaged - could unleash all their pent-up feelings, with nobody safe and a deadly explosive collar placed around every school kid's neck ready to pop their heads off if they disobeyed the rules. Which were simple. Kill each other until one remains.

Of course, Battle Royale had arcs beneath its ostensible mere existence as the poster-boy for increasingly imaginative deaths, as you follow the 'hero' through the bloody landscape, but really the joy is pure and simple - wondering who is going to die next, and how. It is classic horror movie territory, with the survival aspect successively giving it some drive and focus, as various kids attempt to defeat the game, defeat the collars, or just avoid killing - with questionable success. Somewhat ironically, adult actor Takeshi "Beat" Kitano (Sonatine, Hana-bi and the more mainstream Ghost in the Shell) is easily the star of the show despite a vastly limited runtime, giving the narrative a curiously whimsical bent, whilst imbuing it with some palpable emotional weight too.

It would prove to be celebrated Japanese director Kenji Fukasaku's last movie, and an iconic bookend to his career. Then, of course, then the eminently mainstream Young Adult frontrunner, The Hunger Games, likely stole any sense of originality this forebear once had, leaving it feeling a little dated in concept unfortunately. But once you realise that this one's for adults, you find that it's still got an edge - few films have ever been audacious enough to have teen characters literally rip each other apart quite so viciously - and even robbed of that first-time shock value, it's still an effective little survival horror.

Battle Royale comes to UK 4K courtesy of Arrow. This Ultra HD Blu-ray release affords both the Original Theatrical Version and the Special Edition Director's Cut of the film, on separate 4K discs no less, not only in native 4K but with Dolby Vision too.

Every bit as good as you could have possibly hoped for

Battle Royale doesn't necessarily look like a movie from 2000, lacking any of the striking style or effects that might have given it legs Matrix 4K-style, but it's unsurprising really for a relatively low budget Japanese production from over 20 years ago and, flipped on its head, it's simply never looked this good. Returning to the negative, Arrow has done a fabulous job, drawing a full native 4K restoration from the source material, cleaning it up meticulously but not overzealously - there's a wonderfully textured look to the suitably filmic image - and lovingly applying Dolby Vision to give the colours life and depth, yet still remaining true to the gritty, murky and positively dark content.

Hardly packed with standout shots, it's still a nice looking production, which enjoys some tremendous fine object detail that laps up skin textures, waves of hair, clothing textures and background nuances on the island. The colour scheme benefits perhaps somewhat surprisingly considering the source material - it's hardly a film popping with neons - with interiors still looking suitably drab, but never lapsing into washed out as was previously the case, and locations barely showcasing any striking colours, but still giving a rich depth to the lush green trees and landscape. The bright green computer graphics stand out - ironically somewhat Matrix-style - as do the burgundy ties and bursts of claret, whilst black levels are inky and bottomless, with no signs of crush. Sure, it's not flawless, some signs of softness and very fleeting moments where the image doesn't hold up (not to be confused with the dodgy CG blood applied) are peppered very infrequently across the duration, but really it's every bit as good as you could have possibly hoped for, and they've provided full native 4K restorations for both cuts - on separate discs - which is tremendous for fans.

Battle Royale's 4K Blu-ray release affords the original Japanese audio mixes on both cuts on both discs with both DTS-HD Master Audio 5.1 and uncompressed 2.0 mixes, it doesn't get much better than that, and nobody could have possibly been holding out for Atmos.

A very good track and a memorable score

Dialogue is keenly placed, whilst the soundstage opens up for a few more boisterous moments involving various random weaponry, from submachine guns to shotguns to explosions and plenty of slashing stab wounds and fleshy 'thunks'. LFE comes into play for some of the booms and bangs, and there's a nice energy to the environment but, really, the score does the heavy lifting - so much so that you can entirely see why it's been gifted its own dedicated CD soundtrack disc. The sweeping orchestral score may be frequently over the top but arguably so is the movie, and it relishes in that operatic feel, dominating the entire array for the majority of the duration. It's a very good track and a memorable score.
﻿

Arrow has delivered some lavish box sets, with multiple discs, cuts and all the background material and gorgeous packaging you could possibly hope for. But Battle Royale arguably tops all of them. It's an astounding release, which dedicates the first two 4K discs to Battle Royale - boasting the Original Theatrical Cut on Disc One and the superior Special Edition Director's cut on Disc Two, both packed with Commentaries, Documentaries, Interviews, Featurettes and Trailers - but not stopping there. No, Disc Three and Four are for the sequel, Battle Royale II, which earns its first Blu-ray release here, the third disc providing the Requiem Cut and the fourth disc the significantly longer Revenge Cut, again both packed with Documentaries, Featurettes and Trailers. And do they stop there? No, why not throw the CD Soundtrack on Disc Five. All wrapped up in lavish box set packaging with a poster, a 120 page book and a set of Battle Royale Trump Cards. It's utterly comprehensive - the kind of treatment you'd want every film to get, however big or small. Fans of the Battle Royale films couldn't possibly hope for more.

It's utterly comprehensive - the kind of treatment you'd want every film to get, however big or small

• Brand new audio commentary by critics Tom Mes and Jasper Sharp
• Coming of Age: Battle Royale at 20, an exclusive new 42-minute documentary about the legacy of Battle Royale
• Bloody Education: Kenta Fukasaku on Battle Royale, a brand new exclusive interview with the film’s producer and screenwriter
• The Making of Battle Royale: The Experience of 42 High School Students, documentary featuring footage from the shooting of the film and cast and crew discussions
• The Slaughter of 42 High School Students, a look behind the scenes of the shoot
• Behind the scenes footage with comments from the cast and crew
• Filming on Set, a look at the shooting of key scenes from the film
• Conducting Battle Royale with the Warsaw National Philharmonic, archive footage of Masamichi Amano conducting the soundtrack rehearsal

• Bloody Graduation: Kenta Fukasaku on Battle Royale II, an exclusive brand new interview with the director and screenwriter of Battle Royale II
• Behind the Scenes of Battle Royale II, on-location featurette during the film’s shoot
• Rehearsals footage of the auditions and pre-production rehearsals
• War and Struggle, featurette of the cast discussing their thoughts on war
• Alternate Piano Scene
• The Recording of the Music Score, archive footage of Masamichi Amano and the Warsaw National Philharmonic Orchestra
• Opening Gala with The Orchestra, featuring a public introduction by the director and main cast
• Battle Royale II Premiere, a featurette on the film’s first screening at the Marunouchi Toei Movie Theatre
• Trailers and TV spots
• Image gallery

Battle Royale may not have aged that well for some seasoned viewers returning to it twenty years later, but it's still got some kick to it, not least in its operatic score and unflinching dispatching of screaming teens. Oh and Takeshi Kitano steals the entire show.

Tremendous, comprehensive, and an absolute must-have set for fans

Arrow's UK 4K release of Battle Royale may well be a contender for its most impressive release - and it's got some fierce competition in that department - boasting both cuts of the first film, in native 4K with Dolby Vision, on separate discs, a further two Blu-rays dedicated to both cuts of the second film, as an "extra", further features packing all four of those discs, and a fifth disc which is the Battle Royale CD soundtrack. It's tremendous, comprehensive, and an absolute must-have set for fans.