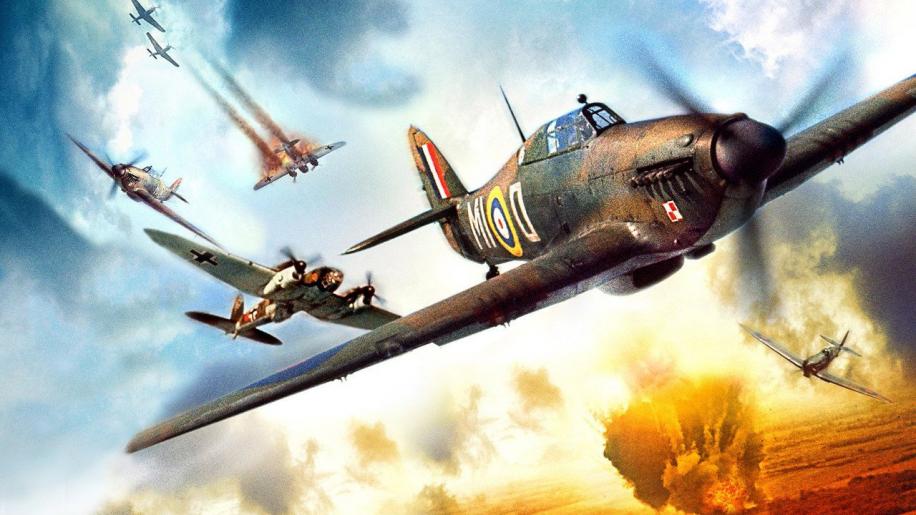 As you'd expect, the picture isn't going to win any awards. But like looking at a badly photographed Rembrandt, you can still see there is something good there, no matter the overall quality. There is lots of grain, colours are washed out looking and ringing is evident. Most of these problems are more clearly noticed in out door scenes, and the ringing can be seen quite clearly when a plane is framed against the sky. Detail is not bad, though. In the Swiss embassy interior, all the ornate furnishings and books lining the walls are all clearly defined.

This should be in the extras, but it is so much a part of the movie, it will be mentioned here: Do NOT watch Battle of Britain with the restored William Walton Score. The restored score is wholly prosaic and adds nothing to the movie. The original score is way better with one of the most memorable movie theme tunes. Battle of Britain just isn't the same with out that tune (note: the Walton score is still present in some form during the long air ballet sequence).

The actual movie itself, in quality terms is not good. Everything has that stretched lack of fidelity that most older movies have. There isn't any getting around this, though DTS seem to have made a better job of the soundtracks mastering than DD. Everything does sound authentic, though, and kudos to the production teams efforts to make it that way. So, slightly below average quality, made better by good samples and superb score.

The crew commentary starts out pretty dry with little character coming across. After a while the crew seem to get into their stride and things become more fluid. There are some insightful comments regarding the air battle scenes and how they were filmed from a converted bomber. Some detail is revealed about how the noise Spitfires and Messerschmitts make in the air, and from the ground, was recorded. It is clear from the commentary a lot of attention was paid to these kinds of details to make the movie as authentic as possible.

Battle for the Battle of Britain, narrated by Michael Caine, builds on this authentic theme. Battle for the Battle of Britain is from the time of the movie and contains a lot of behind the scenes material. As the camera films extras and so on, details like WW2 period adverts, which you may not even see in the movie, are revealed: “Yes, the government still wants your railings!” is a rather obtuse ad from the time. It isn't all grim warfare reminiscences, though. The real Air Chief Marshal Sir Hugh Dowding, wheelchair bound, is shown a replica of his old office from the movie. Dowding comments “this does bring back old memories”. As he is wheeled to behind the desk. “This is where I have been sitting pretending to be you, an making a very great mess of it, too.” replies The great Laurence Olivier. “Oh, I'm sure” replies Dowding with a smile.

Authenticity in the Air recalls in more detail the shear sweat and toil that was put into the movie to get it filmed correctly. Authenticity in the Air is highly technical in most part not really deviating from production and filming problems. If you like that sort of thing then fair enough, but it was all a bit too analytical to me.
A Film for the Few retreads ground covered in the other features and commentaries. Recollections of an RAF Squadron Leader more than makes up for this being an interview with Squadron Leader Basil Gerald Stapleton. He is an immensely lucid and erudite man who speaks with an authority only those with first hand experience can have.

There are parts of the script that flare up 60's mannerisms, but to be honest, the battle of Britain is pretty timeless. The second world war was an atrocity that hopefully won't be repeated on such a scale. Battle of Britain pulls of a coup in providing an enjoyable, fun movie and yet does not diminish or demean the sacrifices that everyone made to survive that war. Excellent.