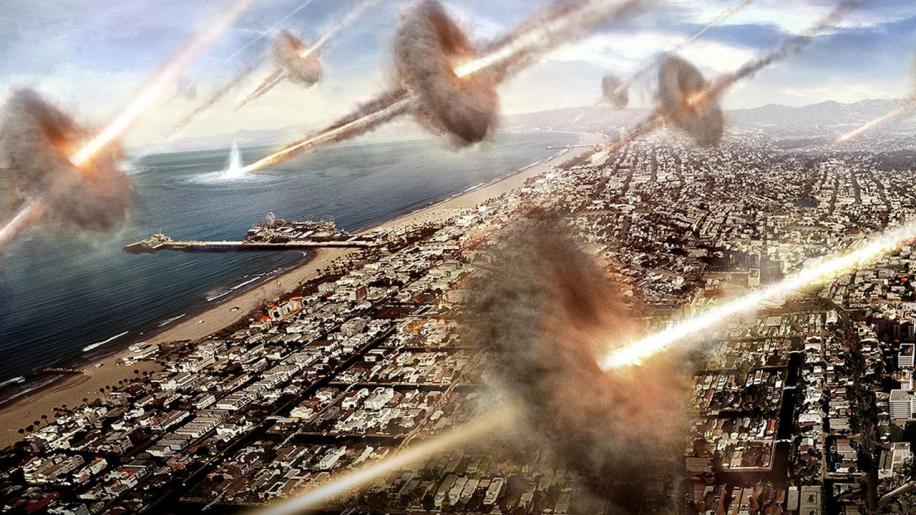 Battle: LA feels like it was made about two decades too late. There’s no point in my dressing it up any other way – it’s an alien-invasion disaster-movie blockbuster complete with the story, acting, action, and, perhaps worst of all, effects which you would expect had it been made in the nineties. And audiences have come to expect a great deal more these days – even to the point where the glorious CG effects of the Transformers sequels are simply not enough to make up for a complete lack in storyline and characterisation. People want more. Sure, fifteen years ago it was enough to have Will Smith charming his way through this kind of film as a wise-cracking fighter pilot who, together with Jeff Goldblum’s geek scientist, will thwart an alien invasion using a downloaded computer virus. Somehow, it worked. Perhaps it helped that I was still in my teens; perhaps we were still watching the dawn of the mega-budget effects-driven Blockbuster – and still in awe of it. Either way, Independence Day was reasonably entertaining. In 1996. I have no idea how much fun it would be now, nor am I desperate to revisit it.

Five years later, in 2001, we had Black Hawk Down, Ridley Scott’s epic war vehicle, one of the best examples of in-the-thick-of-it, street-by-street guerrilla warfare tearing pieces out of a platoon or two of well-trained soldiers. Four years further, and we’re in 2005, with Spielberg’s latest sci-fi actioner, the flawed spectacle, War of the Worlds.

Cut forward over half a decade on from those movies and we have Battle: LA; essentially Black Hawk Down meets War of the Worlds in a ground-based spin-off from Independence Day. I know you’ve probably heard that comparison before – but I use it again because there is simply no better analogy. Battle: LA, were it made soon after Independence Day, and had it featured a cast of marginally more recognisable, better developed faces, may have worked as a street-war based companion-piece to the Roland Emmerich blockbuster ID4. But it wasn’t – it was made this year – at a time when nobody really needed, or wanted, a medium-budget hybrid of these three, better-known, and frankly, much better, earlier titles.

Worse still, I can’t believe somebody had the stupid idea to release not one, but two ‘straight’ aliens-invade-Los Angeles movies in the space of 6 months, not that long after the release of two unusual, independent productions which effectively showed the different directions that you could go in with alien invasion features – District 9 and Monsters. They couldn’t even be bothered to change the LA location either. And surely Skyline – last year’s LA-based offering – would have been enough of a warning to put studios off; given that it absolutely bombed at the Box Office. I guess by then, the people behind Battle: LA were already pot-committed; they were going to have to see this through one way or another. You know what the worst thing about all this was? It did so well at the Box Office that we are almost guaranteed to get at least one sequel. Battle: New York anyone? Then maybe Battle: Miami? Oh, sorry, I’m getting this confused with CSI spin-offs. Why did it do so well? Well, I’m guessing because of the use of the word ‘battle’ in the title – if you’re going to make a war movie where your target audience is more than likely mostly male, inserting the word ‘battle’ into the title at least doesn’t leave any room for confusion. You know what you are going to get with this one. Or you think you do.

You see the trouble is, it’s all smoke and mirrors – as this is actually the kind of generic b-movie rip-off-of-better-movies feature that really deserved to have been exported as straight-to-DVD; and the only things pulling it out of that kind of release are clearly the marketing and the money shovelled into the effects for the final 15 minutes (and a few minutes towards the beginning, shown twice just to make the most of the budget-consuming sequences!). Really, the rest of it is pretty damn thin; anorexic, you might say.

The story is simple – delivered to us using a tried-and-tested formula. Kick-start the movie to a flash-forward into the thick of things; explosions ringing out as a platoon of soldiers is being choppered through what looks like an urban warzone. Catering for the MTV-generation of attention-deficit moviegoers, this way we get a big bang to start the proceedings off; before dropping back a day to the start of the story – the humdrum introduction of the troops. First, there’s the veteran soldier, who nobody trusts because of the mistake he made on the last mission, which cost the lives of many from his own platoon. He’s one day off retirement, or something. Then there’s the brash new lieutenant, who has somehow managed to get himself control of a whole bunch of seasoned soldiers (one of them has just gotten married; one has a kid; blah blah blah, you know the score) despite the fact that he’s never seen action himself. He doesn’t like the veteran; nor do the troops. Just as said veteran is about to retire, all hell kicks off, as seeming meteorites start pounding into the West Coast. Only trouble is – they are slowing down. Oh yes, you guessed it, these babies are alive. The squad, called into action, think they are going to see plenty – and so do we. But actually, after a few stage-setting explosions, the scale suddenly gets dropped down to just back-alleys and minor skirmishes, as said squad are dispatched to help out a group of civilians who are holed up in a police station in the centre of LA. Yes, the whole of LA has been evacuated in a matter of hours. And yes, a dozen people got left behind in a police station. Genius. Soon the squad come face to face with the dreaded enemy who, frankly, look like CG extras from the new Battlestar Galactica series. Cue a series of minor confrontations; a few scenes to figure out the aliens’ weakness; a couple of motivational speeches; a medal-deserving sacrifice-in-the-line-of-duty-with-honours-sir! moment; and the above-noted effects driven conclusion. Is it ok for a British citizen to join the Marines? If so, then sign me up!

Battle: LA is patriotic cheese, a cross between a promotional recruitment video for the military and a first-person shooter video game with really spectacular graphics and battle sequences, but really dodgy animation on the individual alien enemies. And what’s with them as well? What’s with the flashing lights, the pseudo-electronic technology that they carry and the humanoid-based form that basically sums up to the aforementioned Cylon look, ripped straight out of Battlestar Galactica? These things don’t look like aliens, they look like cyborgs from the future who have come back to destroy us. And, quite honestly, they’re not really doing a very good job if they can find serious opposition in generic grizzled veteran #86, generic novice lieutenant #42 and their motley crew, who even include a veterinarian (you know she’s going to be useful when it comes to figuring out the alien’s weak spot don’t you?!) and a father with his young son. I guess it helps that their opponents – us, the humans: the good guys – go from having to empty three clips and throw a grenade in for good measure when killing their first alien; to, after a quick lesson on alien anatomy, just firing off a couple of bursts at each of a number of encroaching enemy.

Wow, you could spend all day picking holes in Battle: LA and, at the end of it all, you’re still going to find a fair few people (millions, according to the record-breaking Opening Weekend) will enjoy it for the mindless tosh that it is. And there’s nothing wrong with that. For the rest of us, there is just something that doesn’t sit right with this blockbuster – it takes itself far too seriously to have been made in 2011, and that simply does not work. The music often harks back to the patriotic warble of the beginning of Band of Brothers, or its sister production, The Pacific; and there are frequent interludes where the grizzled veteran gets a ‘significant monologue’ and manages to impart on his troops a life-lesson whilst also offering up a little character development in the guise of a ‘tragic backstory’. Seriously? Enough, already! Even if you tolerated the first motivational speech, by the third, you’re ready to shoot them yourself.

Oddly, lead actor Aaron Eckhart – Two-Face from The Dark Knight – is on remarkably tolerable form here (and I don’t normally like him), and is actually likely to be the single person you may remember from the movie. It’s just a shame that he’s the culprit behind 90% of the aforementioned cheesy patriotic tosh speeches. Michelle Rodriguez spends far too much time cowering and flinching – which seems totally against-type considering she’s playing, yes, another military pilot (Avatar). I didn’t even notice singer Ne-Yo in this movie, which just about sums up his contribution (or the film). Bridget Monahan? See how far she’s fallen. And then there’s Michael Pena – who, despite his standout performance in Crash, appears to have been lumbered with cameo duty on no end of movies lately (from Shooter to The Lincoln Lawyer, to this).

Although I’m dispatching a salvo of heavy criticism at this sorry excuse for a movie, I must apologise for my shotgun approach to tear it apart. You see, it’s really quite hard to coherently recall everything that was wrong about this movie – mainly because it’s just so damn unmemorable. And that’s the heart of the problem. This was a Channel Five B-movie project which somehow got polished up with a few minutes of Big Screen effects and slung out at an unsuspecting pre-summer Blockbuster audience; who came out in sheep-like droves for the opening weekend. If, in an alternate universe, where there is some real justice, Battle: LA had just gone straight-to-DVD – or was even shot as a made-for-TV feature, people would have watched it on a Saturday afternoon, giggled a bit at the overly patriotic makes-me-wanna-salute moments; made tea during the quieter moments; and stayed interested for the battle sequences. Then they would have switched off the TV and forgotten all about it. If you’re prepared for a movie that throwaway, then welcome to Battle: LA.