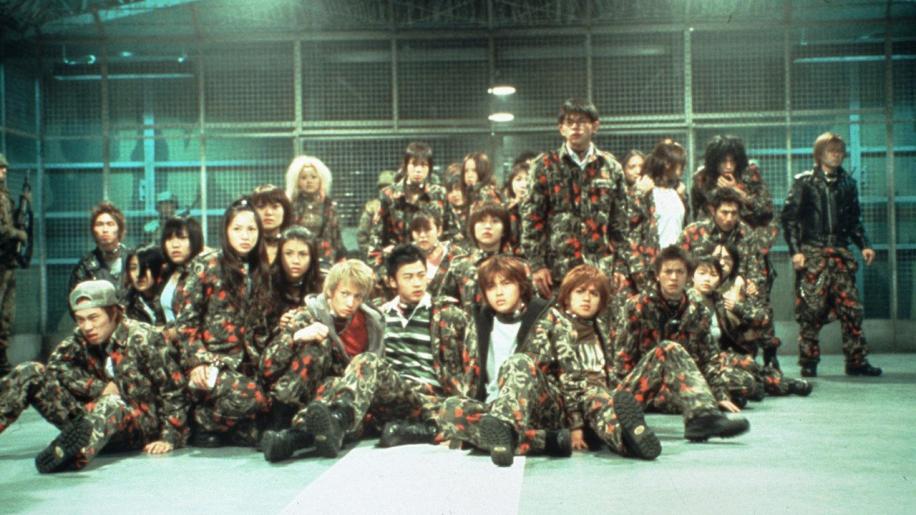 Battle Royale II is the inevitable sequel to the remarkable international hit Battle Royale. Directed once again by Fukasaku san (although his son took over half way through due to ill health) the story has been cleverly adapted and this time points an accusatory finger at the futility of war, and the needless loss of young lives. It tackles global terrorism, and the involvement of a certain superpower in civilian deaths. Like the original Battle Royale these themes are like fresh wounds in the public conscience.

Shuya is one of the survivors of the original BR Bill. He has rounded together a group of similar survivors and declared war on adults. The “bigwigs” to use the terminology of the movie, have therefore adapted the BR Bill. They have decided if Shuya and his terrorists want a fight they will give it to them by sending the next class of teenagers to do battle with them. This time everyone is teamed up with a member of the opposite sex, and if one of the partnership should die, the exploding necklace of the other will automatically detonate. Then it's back to the island for another round of gloriously OTT Japanese overacting and a huge increase in blood-soaked deaths and exploding heads. Well, who said having a social conscience couldn't be entertaining?

Whilst clearly not as original as the first movie the director has decided that an increase in the frequency and violence of the death scenes is the way to go. Although this works well for the opening beach landing scenes, it quickly loses its appeal. On close scrutiny the movie lacks much of what made the original so appealing. It seems like this time we are here purely for the death scenes which become stale and tedious, and you quickly realise that the script and scenes play out exactly like BR 1. After an hour you, like I will probably become board.