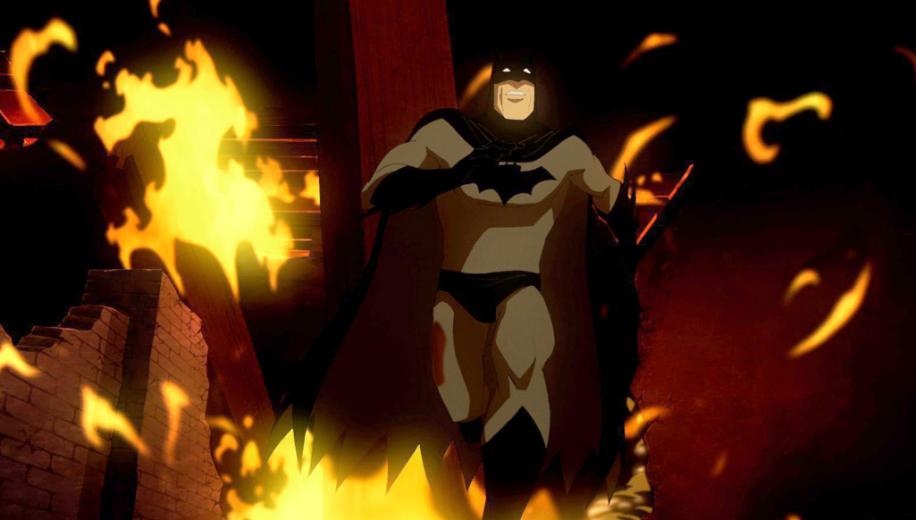 Batman: Year One comes to Region Free US Blu-ray complete with a 1080p High Definition video rendition, presented in the animated movie’s original aspect ratio of 1.78:1 widescreen. Detail is excellent throughout, with strong, well-defined lines giving the utmost clarity to the hand-drawn elements, which are seamlessly integrated with the CG work done, and rendered sharply and distinctly throughout. The colour scheme is strong and broad, with plenty of rich, vibrant reds, blues and even purples, played well against the gritty, more sombre dulled yellows, browns and greys of the dilapidated city. Blacks are superior, allowing for fantastic shadowing, Batman truly coming out of pure darkness to scare his foes, and retreating into the same sheer, seemingly never-ending blacks afterwards.

Contrast is strong, and overall there are many more plus points than minus – although banding is still an issue; it is an element which has plagued most of the DC Universe Original Animated Movies, and whilst arguably not as prevalent here, it is still frustrating to see, especially when coupled with a few other, more minor and sporadic problems – blocking, aliasing and even a bit of rather random noise. Nevertheless it is still a strong presentation, just not the demo-quality visual treat than fans would have salivated over. The accompanying DTS-HD Master Audio 5.1 track is much more unreservedly satisfying, a frequently immersive offering that balances out the more powerful action sequences with fantastic coverage of the quieter moments as well – brilliant sound design leaving this a clear winner through and through. Dialogue – from McKenzie’s monotone Batman narration to the gruff Cranston as Gordon – comes across clearly and coherently, largely dominating the frontal array, with screams and shouts sounding authentically painful and never in the least bit shrill. The surround dynamics allow for whizzing bullets, passing cars and basically all directional material to come across extremely well, and the rears pick up every tiny background sound: the persistent rain, horn-honking traffic jams, elevated trains and fluttering bat-wings (there’s one, perhaps over-the-top sequence, which involves hundreds – if not thousands – of the damn things).

The atmospherics are perhaps the highlight, creating a fantastic ambience which permeates even the quieter moments, and being arguably even more impressive than the actions set-pieces. There’s some lovely LFE input which pervades the proceedings, and enhances the more punishing moments as well as thrumming along in the background, and the score, whilst often quiet restrained – suitably so for a Batman origins tale – nevertheless gets keen presentation. Far more clear-cut than the video presentation, the accompanying aural track is very impressive indeed, and ranks as a demo quality offering. In terms of extra features, the DCU releases have seldom come up short, and Year One is no exception, coming to us with all the key ingredients: commentary, featurettes, interviews and trailers – as well as related episodes from the animated TV shows, and the fan-favourite element: the DC Showcase Animated Short, here, rather unusually, not only expanding on a character from the main feature itself, but also bringing the vocal talent back for a longer tour of duty, with Eliza Dushku returning for a story following Catwoman.

One of the strongest elements in the full-length commentary, provided by a variety of contributors, including voice director Andrea Romano, creative director Mike Carlin, producer Alan Burnett and co-director Sam Liu, who offer up an engaging background look at the production, paying tribute to the classic graphic novel, discussing the pros and cons of the seminal work (Miller’s words and David Mazzucchelli’s artwork were always cinematic in style – perfect for a film adaptation, but the downside was the... erm, succinct form of storytelling that Miller favours, leading to an unusually short runtime), noting the key performances from the fairly well-known live-action TV stars, and the anime-edge to the animation. It’s a great listen, covering all the bases, and proving to be interesting throughout, no matter how much depth of background detail is offered up.

Heart of Vengeance: Returning Batman to His Roots clocks in at 23 minutes in length and discusses, more broadly, the origins of Batman, his establishment through the various comic book Ages, the campness of the gaudy TV show, and the Eighties/Nineties revolution that saw him take a darker, more gritty and realistic direction. Most of the Commentary’s participants pop up, as well as former DC Comics editors Denny O’Neil and Len Wein, as well as – perhaps most interestingly – Dark Knight Rises producer Michael Uslan, as they look at Frank Miller’s contribution to the Batman universe: his seminal The Dark Knight Returns and Batman: Year One, and their impact on the franchise, as well as on comics in general, which soon underwent the transition to ‘Graphic Novel’ status as a result of efforts like his. An excellent background examination, this accompanying Featurette is well worth checking out.

Conversations with DC Comics: Featuring the 2011 Batman Creative Team runs at 39 minutes in length and has ex-editor O’Neil, DKR producer Uslan, DC Comics co-publisher Dan DiDio and writer Scott Snyder on hand to further discuss the impact Frank Miller’s work had on the Batman universe, its adapted version, the various cinematic visions of the Dark Knight, and the enduring appeal of the character. Another great, informative offering, this extended conversation is certainly worth dipping in and out of, even if it is quite a lengthy addition to digest in one go.

Bruce Timm’s Top Picks brings us another couple of classic animated Batman episodes, Catwalk from Batman: The Animated Series and Cult of the Cat from The New Batman Adventures. I normally really look forward to revisiting these episodes, and they almost always make me want to dig out my old SD-DVD box sets, but these two are perhaps a little weaker than normal. Catwalk offers up a nice introduction to Catwoman, showing us her point-of-view when faced with the mysterious Dark Knight, but Cult of the Cat is a little over-the-top, and involves a giant, genetically-derived sabre-tooth tiger. Still, worth checking out.

Catwoman is an exciting, engaging 15 minute animated short which makes for a perfect accompaniment to the main feature, bringing back voice actress Eliza Dushku, who reprises her role as the cat-burglar, going after gangster ‘Rough Cut’, in what is a fairly adult offering (which includes an extended pole-dance sequence where Catwoman’s attire is pretty risqué, as can be seen from the screenshot below) which goes for style and action over substance and character development, but manages to keep the pace going so much so that you hardly notice what’s lacking (the soundtrack is great too, the strip club in particular boasting some impressive low-end action, from both the music and the gunshots). Action-junkies will lap it up – particularly the Terminator 3 nod – whilst those familiar with the character still get to enjoy a couple of nice touches, which include the inclusion of the girl she protects in Year One, her flatmate Holly.

We get the first issue (i.e. one quarter) of the original Batman: Year One comic, presented here as quite an effective Digital Comic (although I can’t recommend the original graphic novel enough). There are also extended Sneak Peaks for the upcoming Justice League: Doom, as well as the already-released All-Star Superman and Green Lantern: Emerald Knights. Finally we get previews for the new rebooted Thundercats animated TV series, the Complete Smallville TV series and a couple of other loosely-related shows. Despite the build-up having already started for Chris Nolan’s upcoming concluding trilogy instalment, The Dark Knight Rises, DC Universe Original Animated Movies have decided to pick the seminal origins tale, Frank Miller’s Batman: Year One, as the latest adaptation for their catalogue. It’s an interesting choice, to say the least, although arguably a little poorly-timed. Still, with the likelihood of a film adaptation now being pretty-much nil, at least we get a solid animated offering, which stays faithful to the original, already fairly cinematic, source material whilst also developing the characters enough to provide an engaging, satisfying outing for the Dark Knight. Both making and breaking this particular production are the contributions of the vocal talent for the two key characters – Batman, and Jim Gordon – who get dual cross-over introductory tales: the former getting a monotonal vocal interpretation by The O.C.’s Ben McKenzie, whilst the latter is perfectly rendered by Breaking Bad’s Bryan Cranston. You will likely want to watch this more for Jim Gordon: Year One, as opposed to the overly-familiar Batman backstory, particularly when presented with such a boring narration, but thankfully, even if that’s the case, this is still well worth checking out.

On Region Free US Blu-ray, this release comes with solid video, excellent audio, and a superb selection of extras, making it a worthy addition to any DCU collector’s catalogue, and a decent blind buy for those who enjoy tales of The Dark Knight and, in particular, origin stories. Personally, I would have loved to have seen Miller’s The Dark Knight Returns brought to life in an animated form, although perhaps the Studios are still holding out for a cinematic adaptation. We can but hope.