"I never thought I'd have to be a detective." 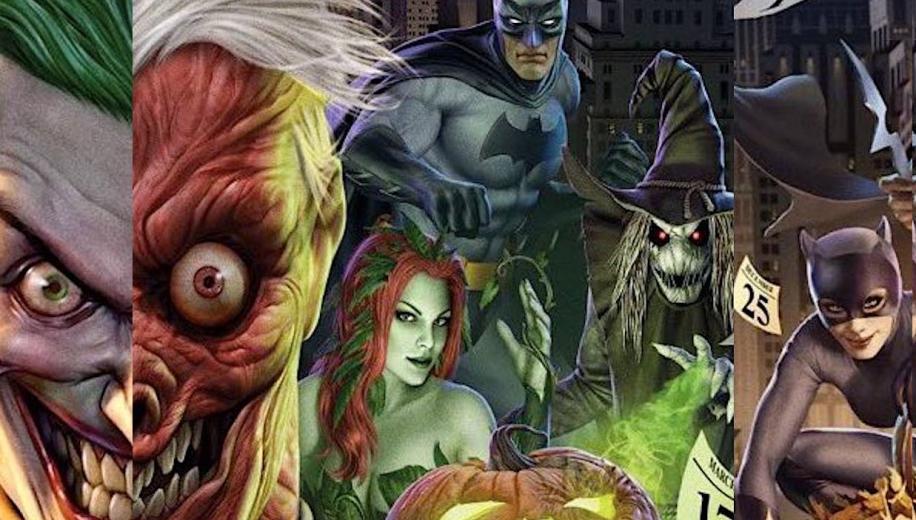 There are 42 films in the DC Universe Animated Movies line, and over a third of them are Batman outings, with another third featuring him as a key component in the Justice League endeavours. Clearly he is the most popular, even within the DC "Trinity" - but he also has some of the best source material, yet this hasn't always translated perfectly to either the live action or animated realm, with the latter attempting to tackle classic tales like Gotham by Gaslight and The Killing Joke with solid but nevertheless disappointing results. Frank Miller's The Dark Knight Returns is an easy standout from the whole lot, gifted room to breathe over 2 great movies, and a similar approach has been taken here with The Long Halloween, a 13-issue comic run which was intended to follow on from Year One and paint a portrait of one of the earlier outings of Batman, and which directly informed the plot of Nolan's seminal The Dark Knight.

Don't be put off by the fact it's animated, this is a great tale of the Dark Knight

When a mysterious assassin starts taking out criminals in the Gotham underworld with ties to mob boss Carmine Falcone, Captain James Gordon, District Attorney Harvey Dent and vigilante Batman are forced to pool their resources to try to identify and stop the killer, finding a whole host of suspects - from The Joker to Falconi's underworld enemies, to maybe even Dent himself.

The Long Halloween has been released in two parts, months apart, with an intention to deliver a single package in 2022 with both movies. As with previous Warner UK releases, there's no sign of the 4K disc alternatives that are generally released in the US (although it looks like even in the US, that's being held back for 2022 too), with both movies available on only 1080p Blu-ray, physically, even if there's a 4K Dolby Vision digital option available too. Comparing the two, and there's very little in it, with the animation an interesting blend of older style and the slightly newer approach seen in their last few releases (Man of Tomorrow and Justice Society: World War II), perhaps lacking in the nuance exhibited by the original source comics, but stylish in its own right, with the Dolby Vision benefiting the palette more, allowing richer blacks, better depth of colour and some real pop in the explosions.

Splitting it into two movies works a charm, giving it room to breathe

The voice cast is good - Jensen Ackles basically does a really deep Batman voice for the duration, but it works fine, Troy Baker does his best impression of Mark Hamill's Joker, and it too works fine, and Bosch's Titus Welliver also makes for a decent Falcone, but the real, tragic, standout is the late Naya Rivera, who makes for an excellent, memorable Catwoman, and is absolutely integral to the story.

Batman's still in his early years here, figuring out where the lines are drawn with the police and, in particular, the more dubious District Attorney, and learning that he can't just get by fighting crime, and may actually have to become a skilled detective if he is to deal with the complex mess that is Gotham City. Long Halloween indeed plays out as pretty-much the only Batman film - animated or otherwise - which is, essentially, a detective story. Sure, there are plenty of colourful faces and action-packed confrontations, as a bevy of classic villains appear across the two-part tale - Joker and Grundy prominently in the first outing, but Poison Ivy, Scarecrow and basically all the other main players appear over the epic saga, whilst Calendar Man is particularly effective in his disturbing Lector-like-ness - but this is still essentially a serial killer detective tale, as The Dark Knight tracks the mysterious killer who assassinates targets monthly on key holidays.

Splitting it into two movies works a charm, giving it room to breathe, but - despite the extended length - the pacing is excellent, with several tense setpieces and brutal fight scenes to pack out the feature(s). It really is a superb balance of action, thrills and genuine story, doing justice to a great - classic - Batman story in a way which the films have rarely, if ever, been able to do (as monumentally seminal as the Nolan trilogy is, it still didn't do justice to either Knightfall or No Man's Land, and probably unwisely attempted to cover too much material in one movie). Don't be put off by the fact it's animated, this is a great tale of the Dark Knight. Indeed, whilst WB/DC get their ducks in order in the aftermath of the vastly improved Snyder Justice League, their animated universe just appears to be going from strength to strength.