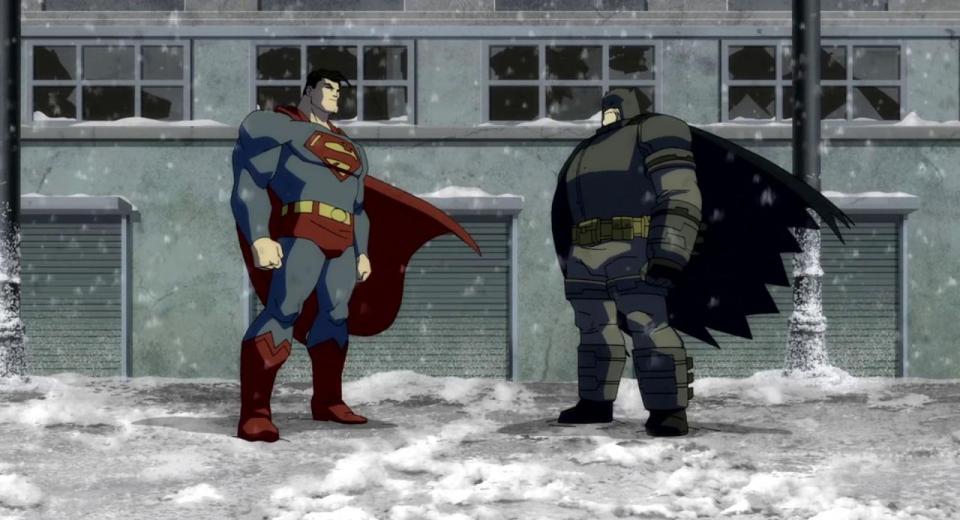 Don't stop reading just because this is an animated feature: Frank Miller's Dark Knight Returns is one of the greatest Batman stories ever told and this is the epic conclusion to the movie adaptation of said tale.

"I always knew it would come down to the two of you someday. The world's not big enough for the both of you."

This isn't just another Saturday morning cartoon either; it's the most violent, adult interpretation of the Dark Knight ever brought to life for the Big or Small Screen. It has the biggest death count of any superhero movie and it manages to effortlessly blend a tense, taut storyline; sharp, quotable dialogue; brutal, relentlessly violent action; and epic superhero confrontations, all into one stunning movie experience.

Honestly, if you've come this far, I'm just hoping you've taken the time out to already watch Batman: The Dark Knight Returns – Part 1 (the review for which is here), or that you've at least read Frank Miller’s original novel, upon which this is based. If not then I suggest you step away from this review and do so immediately, as you’ve probably read too much already.

Part 2 picks up almost immediately after the end of the first chapter – as you would only expect since this is not a sequel but instead a continuation of the same story. Batman has re-emerged, ten years after disappearing from Gotham completely, mourning the loss of his long-term partner-in-crime-fighting, Robin, who was killed in the line of duty. He’s got a new partner now – a new Robin – this time a street-smart teenage girl who’s already found the time to save his life more than once.

Bruce Wayne may well be older, but Batman feels like he has a new lease of life – like he’s found a new passion within. The fire that once burned inside him to rid his beloved city of crime and filth has never completely died out and, now, with corruption at an all-time high and the city streets no longer a safe place to be – owned by the psychotic gangs – it’s time for someone to take them back. It’s time for the Dark Knight to return.

Making his first strike against the vicious Mutant gang he shows that he has truly returned with a vengeance, but whilst he’s managed to re-instil the fear into the hearts of these pathetic, cowardly street punks, he’s also re-emerged as a public menace – a vigilante. And there’s only so much that retiring, ageing Police Commissioner James Gordon can do to keep the dogs at bay.

His return has also drawn the attention of one other man: somebody who hasn’t smiled in almost ten years, but who is practically laughing now...

“I’m feeling so much better. That’s why I’m going to kill everybody in this room.”

Again, I reiterate, you should really already be familiar with the first instalment, which was a great introduction to this pseudo-alternate-reality Dark Knight. If you are, then you should know what to expect here. Or at least, you may think you do.

In reality, this concluding chapter is even better, raising the stakes at every level and allowing the action to crescendo; never letting up and with no real need to set up anything – the characters and setting having already been established in Part 1.

Pick it up now.

“How do you fight someone like that?”
“Simpler than I’ve made it. There’s nothing wrong with the Joker that I can’t fix. With my hands.”

Well, how about this: The Dark Knight Returns – Part 2 is the film where Batman takes out about fifty SWAT officers single-handedly; where a killing spree from the Joker sees him actually do precisely that – kill several hundred people: gassing over two hundred of them and then shooting a dozen or so more at random and on-screen.

This is the one where Batman has to pull out all the stops to prevent a nuclear World War 3 from erupting; where the President puts an assassination hit out on him; and where he has to face off against his strongest ally: Superman.

Everything you could ever possibly want from a Legend of the Dark Knight is right here.

“You say you answer to some sort of authority but they only want me dead because I’m an embarrassment; because I do what they can’t. What kind of authority is that?”
“It doesn’t matter. It’s their world, and they won’t stand for you anymore. If it isn’t me, it’ll just be someone else.”
“Really? Who do they send after you?”

Following on from Part 1, once again the behind-the-scenes work is exemplary.

The art direction is excellent – and this is certainly a no-holds-barred feature, complete with plenty of surprisingly brutal violence (bloody shootings, multiple stabbings, and a protracted neck break) that distinguishes it not only from every other Batman animated feature, but also from every other Batman live action movie. It’s a painful, powerful ride; one which you won’t have been on before.

And the great thing about the first-time director (who has worked on several previous DCU features) is that he has been utterly committed to following Frank Miller’s source words – and pictures – faithfully, leaving the feature often looking like it has literally been ripped right from the book. Fans will not be disappointed.

The score, again just like the first part, is deserving of its own by-line as it drives the piece and perfectly captures the intensity and oppressive mood. I dare you to resist getting swept up by the infectious beat and further drawn into the plight of this tough-as-nails anti-hero.

The cast too – most of whom are obviously returning elements from Part 1 – are excellent, with Robocop’s Peter Weller truly settling into the role as the ageing Dark Knight, cementing that Clint Eastwood/Dirty Harry vibe as was originally intended by Frank Miller. Going up against him are Human Target’s Mark Valley, voicing Superman, and Lost’s Michael Emerson as The Joker.

Whilst there’s always a moment of doubt before accepting anybody other than Star Wars’s own Mark Hamill voicing The Joker, Emerson – currently a mainstay in Person of Interest – has the nasal, weasely quality down to a T, and any lack of full punch and zest can be forgiven given the intervening decade. You don’t, for a second, doubt the relentless psychosis of his Joker – he’s definitely scary as all hell.

Valley also brings just the right amount of arrogance to Superman; that air of superiority which leaves him oblivious to self-doubt; a corrupted patriot, blinded by years of conformity, a mere tool for the far-from-just Governments that wield him. He’s clearly not the Superman we know and love, but he’s a logical progression of that same man; ten years down the line, without anybody to keep him in check, this could well be him.

Certainly if you enjoyed Part 1 then you should find this the perfect conclusion to the story, bigger bolder and more brutal than its predecessor, and just as powerful. It’s undoubtedly the best in the numerous DC Universe Animated Original Features that have been released to date (besting all of the ones I’ve previously reviewed: Superman: Doomsday; the Superman/Batman team-ups Public Enemies and Apocalypse; the compelling All-Star Superman; Frank Miller’s equally iconic Batman: Year One; the action-packed Justice League: Doom; and Superman vs. The Elite) and one of the Greatest Batman Tales Ever Told, up there with Nolan’s fantastic Trilogy.