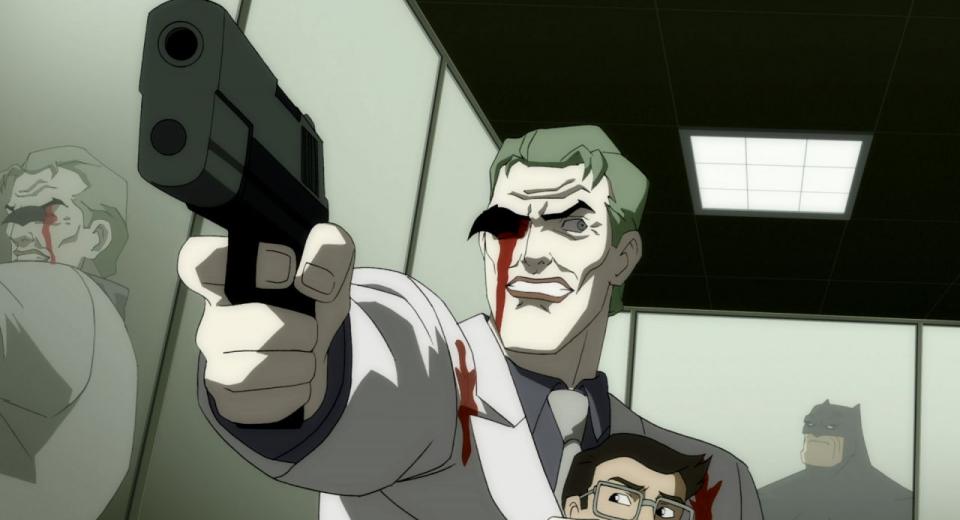 Batman: The Dark Knight Returns – Part 2 comes to Region Free US Blu-ray complete with an impressive 1080p/AVC video presentation, in the movie’s original 1.78:1 widescreen aspect ratio. It’s certainly up there with all of the other top tier Warner DCU Animated releases and matches up to the earlier presentation of Part 1.

Whilst similarly not quite up to scratch as demo, reference material, it comes pretty damn close, and offers up a fine presentation of the original animated movie. Detail is generally impressive, offered up through expertly hand-drawn lines and these elements are wonderfully integrated into the surrounding CG environments. Colours are rich and vivid, despite the inherent restrictions of the more sombre environment – if you think that the first chapter was dark, wait until you see the bleak wasteland of this conclusion.

Although there are still a few minor slights, inherent to the original animation – a smidge of aliasing, some forgivable artifacting and a hint of banding – this is nonetheless a very good presentation indeed. The Dark Knight Returns – Part 2 also continues in the same vein as the first chapter, boasting a stunning movie-quality score, only this time excelling in its presentation of the same. The accompanying DTS-HD Master Audio 5.1 soundtrack is undoubtedly a step up from the one attached to its predecessor, just edging its way into reference territory, most notably through its improved use of the surrounds and rears, crafting some truly engaging set-pieces which will most certainly invade your living room as the action ignites on-screen.

Dialogue comes across clearly and coherently throughout – from Batman’s gravely rasps to the Joker’s camp excitement; from Robin’s short-burst clips to Superman’s velvet arrogance – it’s all given prominence over the frontal array. The effects are myriad, from the battle sequences with tanks and aircraft carriers and explosions aplenty to the one-on-one combat scenes, where the brutality can be heard with every cracked rib; every twisted vertebra. Gunshots ring true, distinguished between handguns and automatic weaponry, and allowing for some decent dynamics across the surrounds. Certainly this is a more action-packed instalment, and the soundstage is all the more engulfing as a result, finally allowing us that immersive quality that the first part was somewhat lacking.

Of course there’s also that fantastic score, which is one of the most important elements in the mix – and in the production – perfectly accompanying the piece and being given keep promotion across the channels. All in all a superior offering for a superior feature. On the extras front this second part somewhat makes up for the limited extras that adorned the release of Part 1, but still does not quite make the most of the opportunity presented by this double-offering. In particular, one has to wonder who came up with the additional episodes chosen for this disc, which are certainly not up to scratch when you consider the dark subject-matter of the main feature itself. However it does seem churlish to complain too much, this is a relatively minor slight on what is still a very impressive set of extras which excels in most every other department.

From Sketch to Screen: Exploring the Adaptation Process spends is a solid Documentary, shot and presented in HD and running at a hefty three-quarters-of-an-hour in length. Although it doesn’t quite make up for the lack of full-length Commentary, it comes close, with debut director Jay Oliva and his crew discussing in depth the production; the original source work – complete with split-screen comparisons between the two – the challenges of adapting it; the removal of the running voiceover; and some of the minor changes made to the story. With plenty of behind the scenes footage and visual aids to punctuate the interview-based feature, this is well worth your time.

Superman vs. Batman: When Heroes Collide spends a further 9 minutes looking specifically at the ongoing grudge match between these two as seen across the decades in the comics; the motivations behind both this and Miller’s confrontation between the two, and the importance of the political backdrop to this particular fight. A nice little addition – although the subject-matter could have been discussed for far longer given the source material they could have drawn from.

The Joker: Laughing in the Face of Death is a quarter-hour Featurette which is similarly focussed on one particular aspect – this time Batman’s arch-enemy, The Joker, taking a look back at his introduction; his crime-sprees over the decades; his biggest moments, and, again, investigating the comeback that Miller plotted for this particular antagonist.

From the DC Comics Vault offers up no less than three additional episodes this time around, however only two are from the excellent Batman: The Animated Series, with the third from the painfully comedic Batman: The Brave and the Bold, which owes far more to the camp ‘60s Adam West TV series than it does to anything since. Unfortunately the selected episodes are not quite the best we could have had – the first two are Joker-centric offerings which certainly match up to the subject-matter (The Last Laugh and The Man Who Killed Batman), but the last (Battle of the Superheroes!), which is supposedly focussed on a confrontation between Batman and Superman, is the worst animated tale you could pick on this subject. There are far, far better Batman vs. Superman outings which they could have chosen. Still, it’s a minor gripe, and all they really should have done is NOT include the episode from the awful Batman: The Brave and the Bold series. “There’s nothing wrong with the Joker that I can’t fix. With my hands.”

One of the Greatest Batman stories ever told, Frank Miller’s seminal The Dark Knight Returns reaches an epic conclusion with this second chapter in the two-part animated adaptation. Long believed unfilmable – particularly in live action format – DC Unlimited Animated Original Movies have stepped up to the plate to give fans the next best thing, a bleak and brazenly brutal vision of an ageing Batman who has decided to take up the mantle he retired some ten years earlier. Don’t be put off just because this is an animated feature, it’s one of the most violent, adult comic book adaptations of all-time, and paints a dark picture which even Nolan’s seminal trilogy only touched upon.

On Region Free US Blu-ray – the likely-to-be-identical UK equivalent is out in a couple of months – we get very good video and audio presentation, as well as a selection of solid extras. Fans and newcomers alike should definitely add this to their collection – you may be surprised by just how good it is, even if you’re not overly fond of (or even all that familiar with) animated movies. Highly recommended.