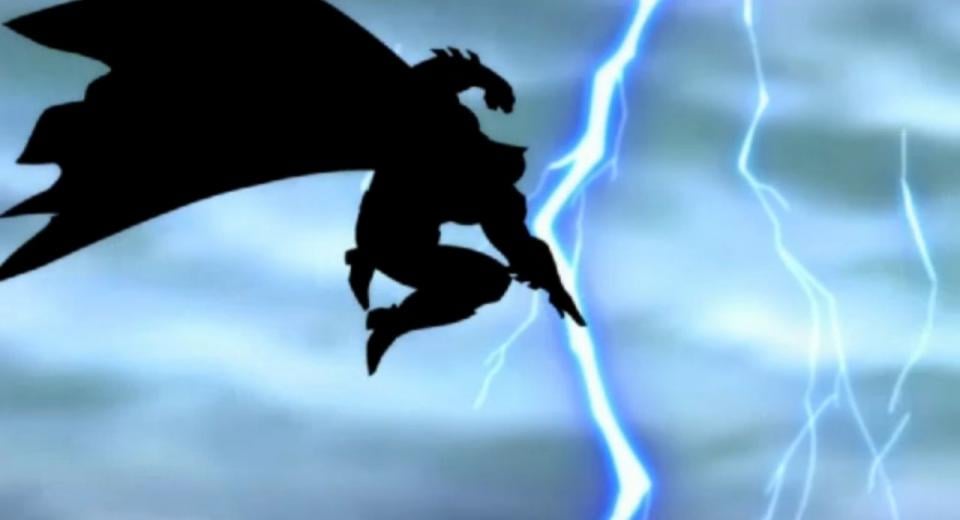 Batman: The Dark Knight Returns – Part 1 comes to Region Free UK Blu-ray complete with an impressive 1080p/AVC video presentation, in the movie’s original 1.78:1 widescreen aspect ratio. It’s certainly up there with all of the other top tier Warner DCU Animated releases. It may not be perfect; it may not quite achieve demo quality status, but it is also quite hard to criticise – the flaws either acceptable or inherent to the original animated style. Detail is generally very good indeed, picking up even the slightest nuances in the hand-drawn lines – whether faintly adding texture or boldly defining outlines – and these elements are wonderfully, seamlessly blended-in with the surrounding CG environments. The colours are deep and vivid; sure the palette might be defined by deep blues and solid blacks as the night sweeps over Gotham, washing away the filth, but this is far from the gritty, grimy look, instead infusing the original comic’s colours with a new lease of life, and making them bold and defiant throughout. The animation also wonderfully blends some perfectly-rendered flash-moments that could easily have leapt straight out of the pages of the graphic novel, with fast-moving action sequences that only occasionally betray the faint aliasing, almost non-existent artifacting, and slight banding which conspire to prevent this feature from quite achieving the reference quality status that it so deserves. The Dark Knight Returns – Part 1 has a fantastic score, which broods throughout and rouses whenever necessary, however the accompanying DTS-HD Master Audio 5.1 track promotes it in a distinctly front-dominant fashion, without enough rear action, leaving full immersion just out of your grasp. Still, it is otherwise a very good presentation, with dialogue coming across clearly and coherently throughout – despite Weller’s gravely, near-mumbled tones as an ageing Batman. Effects are myriad, and range from the crack of lightning to the thunder of the new Batmobile (it’s a tank!). Caterpillar tracks crunch underfoot, shells rip through the soundstage and explosions create some wonderful LFE undercurrent and depth to the proceedings. Bones crunch, crack and break; body blows sound genuinely painful, and gunshots threaten to perforate your living room. Certainly the rear speakers come into play – there’s a wonderful bit of directionality as a helicopter whips its way from behind you, over your head, and to the front – but there’s not quite enough output to create an all-engulfing experience: what this track deserves. Still, the score does the movie more than justice, and perfectly enhances every single sequence throughout. With better rear action this could easily have been demo quality, rather than just a very good, but still limited audio presentation. Although nowhere near as impressive as some of the other DCU Animated Original Movie titles, and despite the fact that you get the feeling that the best supplements have been saved for Part 2, we do get a couple of Featurettes and a couple of interesting Batman: The Animated Series episodes to round out the package.

Her Name is Carrie... Her Role is Robin is a 12 minute Featurette looking specifically at the first female Robin, both detailing her controversial appearance in the original novel and her still-revolutionary role here.

Batman and Me: A Devotion to Destiny, The Bob Kane Story is a hefty 38-minute Documentary dedicated to Batman creator Bob Kane. Although not particularly relevant to this title – which should have arguably had more of a Frank Miller-centric Documentary – this 2008 extra is still a worthy watch for any Bat-fan, featuring archival interviews from Kane himself, as well as plenty of his friends and contemporaries, discussing his work.

Batman: The Dark Knight Returns – Part 2 Sneak Peak is a 7 minute Featurette which looks at the culmination of this story, released in early 2013. Although just a simple trailer would have probably been far more effective – this does not really reveal any final animation footage whatsoever – we do get the cast and crew discussing a little about the importance of this tale and the epic scale of the second part.

Previews include a brief 4-page look at The Dark Knight Returns Digital Comic, some trailers and a Sneak Peek at the previously-available Superman/Batman: Public Enemies release. Now that Nolan’s defining Batman Trilogy has pulled the Dark Knight into the mainstream, both new and old fans have the opportunity to discover some of the all-time greatest Batman stories as pretty damn impressive animated feature films. The DC Unlimited Animated Original Movie series has already adapted author Frank Miller’s seminal Batman: Year One reboot, with largely good results, but their take on Miller’s arguably even more stunning The Dark Knight Returns marks some of their absolute best work. Staying faithful to this brutal tale of an ageing Bruce Wayne returning to battle one last time – clearly a big influence on Nolan’s The Dark Knight Rises – this is a thoroughly enjoyable feature, brimming with action, violence, compelling thrills and fantastic dialogue.

On Region Free UK Blu-ray we get very good video and audio presentation, as well as a selection of reasonable extras. Fans and newcomers alike should definitely add this to their collection – you may be surprised by just how good it is, even if you’re not overly fond of (or even all that familiar with) animated movies – and I absolutely guarantee that once you get to the end you’ll be itching to check out the second part, due early next year. Recommended.