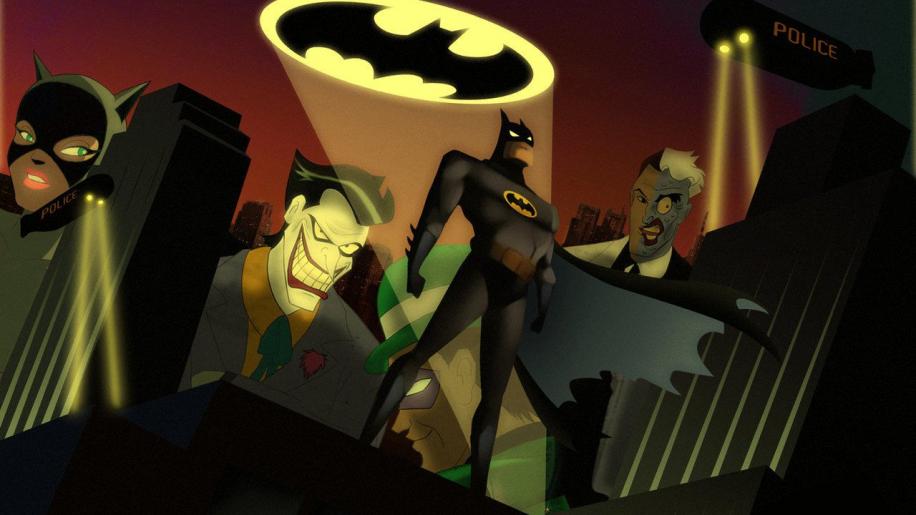 Volume 4 boasts extremely good colour fidelity, with the entire spectrum beautifully rendered within the 1.33:1 image although, quite often, you may find that the lush, deep reds tend to smear and flare. The disc does a good job overall of maintaining the crisp definition of the thick colours, though. Blacks are very impressive, with some great shadow-play and terrific depth afforded the picture throughout. With no real grain to speak of, only the little flecks and speckles of small, but noticeable, print damage mar the transfer. The frames can judder on occasion, too. But, to be honest, all this is fairly insubstantial and shouldn't put anybody off.

On the digital front, the discs do suffer from edge enhancement, though this isn't too severe, some slight aliasing and trailing of the animated lines from time to time. Artefacts and blocking didn't really show up to any degree, I was pleased to note.

All in all, these discs look very pleasant indeed, with only minor faults that do not, in any way, detract from the enjoyment of the show. The Dolby Digital 2.0 stereo track accompanying Batman Volume 4 is not at all bad, actually. With some tweaking about on your amp, you can boost it up quite nicely. Separation across the front is reasonably successful, when called upon, although I found the track seemed to prefer just a straight forward blast from both channels. The track is clear and robust and doesn't shy away from the big boom-boom explosions that seem to rock virtually every episode. Obviously, its range is limited, but the effects, the score and the dialogue all come across well.

Steerage offers up some nice placement of voices and some particularly well-rendered clanging of steel doors, or anything metallic. Gunshots bark and roar with plenty of gusto, Two-Face blasting away with a Tommy-gun sounding really full-on. Bass levels aren't spectacular, but they handle the job without any serious problems, and the high ends aren't pressed as such. So, overall, whilst you can't honestly expect too much of the stereo track, it still manages to deliver the goods in a pretty solid and reliable manner. Not too much bang for your buck, but a fairly decent reproduction, all the same. Well, in the special features department, we are blessed with three Commentary Tracks, gracing the episodes Over The Edge, Critters and Legends Of The Dark Knight, and a small, but reasonably fun, featurette about the villains of the piece entitled Interactive Arkham Aslyum.

Starting with the Commentaries, we get the combined thoughts and opinions of the show from Producer Bruce Timm, Writer/Producer Paul Dini, Art Director Glen Murakami, Storyboard Artist James Tucker and Director Dan Riba. The best of the fast and fun chat-tracks cover the infamous dream-episode Over The Edge and the fantastic homage-fest Legends Of The Dark Knight. They discuss collectively the new direction that the show was taking, incorporating digital animation, new characters and slicker, more modern looks for some established characters, such as Nightwing (the mullet, anyone?) With plenty of anecdote thrown in and sticking fairly close to the on-screen action, they defend the opinion-dividing what if? notion surrounding Over The Edge, and happily reminisce about the sheer joy of working on such a nostalgic treat as Legends Of The Dark Knight, paying neat tributes to Dick Spring and Frank Miller. Nice, entertaining tracks. Well worth a listen, folks.

The only other feature is the Interactive Arkham Asylum which has, listed in the menu as Case Files, little soundbite introductions to the key villains that Batman faces this time out. Running roughly 2-2.30 mins apiece, we hear from Bruce Timm, Paul Dini and a few producers, artists and voice directors about the likes of The Penguin, Mr. Freeze, The Joker, Harley Quinn, Clayface, Ventriloquist and Scarface, Two-Face, The Riddler, Ra's Al-Ghul, Scarecrow and Poison Ivy. This isn't bad, but it really is brief and a little insubstantial to be visited more than once.

It is also possible to view the episodes with either the original title sequence, or the newer version from Batman: Gotham Knights.

Not bad, overall. The Chat-tracks are certainly worth a go, but it's the shows, themselves, that matter. Well, what can I say, to sum up this excellent show? Batman is my favourite superhero and the Animated Series is certainly the most consistently entertaining and respectful incarnations that he has ever received. Bold, exciting, sexy and thrilling - what more could you ask for? With clever storylines, great vocal talent and tremendously stylish animation, the show, in my opinion, went from strength to strength. This volume sees the Animated Series completed now, and it is a collection of class, wit and supremely dynamic excess. A perfect companion piece to the original comic-books and a truly iconic creation in their own right.