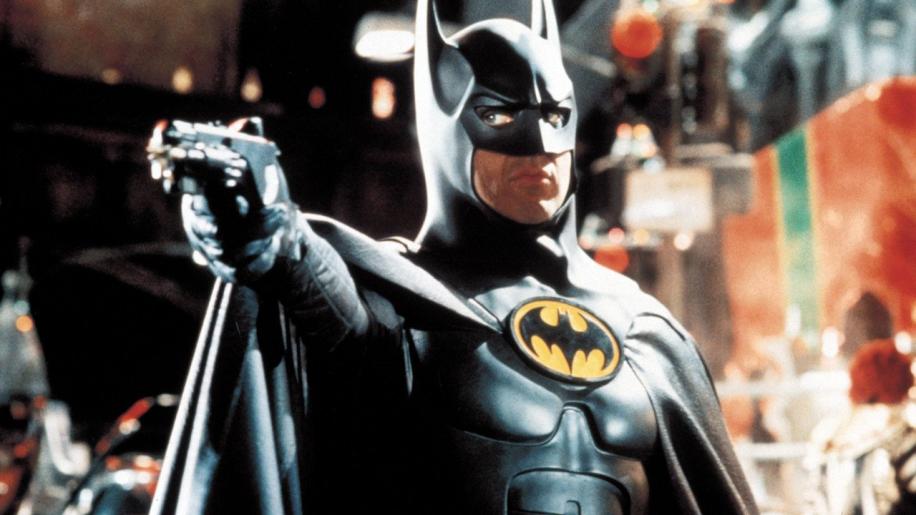 “Bruce Wayne ... why are you dressed up like Batman?”

It was hard to believe that Tim Burton could have gone darker with the Caped Crusader after his comic-savvy first interpretation wowed audiences a couple of years before, yet that is exactly what he succeeded in doing. With his fabulously skewed worldview and warped visuals decorating another tale of broken minds and outlandish freakery, he took the Bat deeper into the twisted realm of the psychologically damaged of Gotham's sick underbelly. Whereas it was frightening fun to witness Jack Napier's descent into tortured mania in Batman, there was a concerted effort in the sequel to etch the scars of anguish and tragedy of the new villainous double-act of The Penguin and Catwoman right across the screen and our hearts. He created in Batman Returns an insane tableaux of shattered souls tumbling into literal, and metaphorical doom, only to rebuild themselves as embittered avengers seeking salvation and, ironically, a little bit of dignity. Horror and pathos, paw-in-flipper. Cleverly constructed, the story makes us genuinely feel sympathy for the devil. Batman Returns isn't, and never was, a kid's film. In fact, it's hard to imagine a more perverse tale of super-heroics. The Crow was a mightily valiant attempt to scoop through the despair of broken and cursed nobility but, despite its clever tagline, it was never even close to being “darker than the Bat”. And, in a stroke of genius, this one was set in a demented snow-globe of a Christmas Gotham City.

The screenplay by Daniel (Heathers) Waters was keen to probe the outsider status of society's lost and wayward. Poor Oswald Cobblepot, tossed into an icy river and abandoned by parents too horrified of his flippered-deformities to keep him - literally flushing him away, in effect - is a majestically painful way to commence a crowd-pleasing, big budget blockbuster. His subsequent survival, positively thriving down in the squalor and effluence of Gotham's sewage, and rise in status to infamy is the exact flipside of the American Dream. Or, if you prefer it, a ribald and subversive take on the story of Moses. As the Penguin, as far removed from the dapper TV version as you could possibly get, Danny DeVito inhabited the role with an aching vulnerability, crowned by an obsessive greed and hunger for revenge. His visceral abhorrence - oozing black blood and voraciously chewing down on raw fish - is matched only by his heartrending plight to find out who he really is and just why he ended up in the garbage whilst those topside prospered. That we see both sides of this persona - the despicable and the pitiable - is down to DeVito's performance. As grotesque as his makeup is, the sly touch is that we can still plainly see the diminutive actor deep within it, although his familiar and cheerful visage has been dragged out into a wicked parody of itself. His masterplan-cum-blackmail scheme to have Gotham's bogus leading light and cut-throat entrepreneur, the cunningly-monikered Max Shreck (a superb Christopher Walken) backing his bid to become Mayor is a delightful satire on everything from Citizen Kane to It's A Wonderful Life (itself, full of Yuletide redemption).

“You poor guys ... always confusing your pistols with your privates.”

The addition to the cinematic Rogues' Gallery of Selina Kyle, aka Catwoman, was the icing on the frosted cake, though. Of all the relationships that Batman has had in the comics, the on-going battle of hearts and minds with this nemesis and paramour has been the most intriguing. As with all the creations in the world of the Dark Knight, it's been written and re-written many times, but here, in Burton's movie, it receives an incredibly textured sense of almost operatic tragedy. Michelle Pfeiffer effortlessly captures the heart and soul of the mousy and victimised Selina, ambitious but unconfident secretary to the nefarious Max Shreck, and also the playful anger of her slinky, feisty and darkly mischievous alter-ego. That her fall from grace - and one of many in the film, I might add - results in her practically magical transformation into Catwoman is, I believe, a note of authentic catharsis in this gothic noir power-play. That Burton and Waters make no attempt to explain how a mob of feral cats licking and nibbling her stricken form, lying broken in the snow, could effect this metamorphosis is not a cheap sidestep at all, but rather a credible and bewitching layer of mystery in a film that straddles the supernatural/heightened reality divide only tentatively. And, man, does she look hot in that stitched-up, figure-hugging costume. Of course, Catwoman's antics are in earnest just as much as those of the Penguin. She may seek revenge on the men who would subjugate her, dismiss her, even kill her, but her inner conflict with who she is and who she has become is the main enemy in her nine lives. When she teases Batman to help her “find the woman beneath the cat,” it is both a challenge and a plea. Selina, herself, is lost within yet another crushed psyche, her mind, like those of almost everybody else unfortunate enough to reside in this haunted Gotham, is a maze of paranoia, fear and self-loathing. The world of Batman is like an shrink's worst nightmare - literally everybody within it is mad.

“No darker than yours, Bruce.”

And what of the noblest lunatic of them all - Batman? Michael Keaton excels here as the Dark Knight as, just like the more matured Burton, he is more sure of himself this time out. He inhabits the newer and more streamlined suit with a stronger, more aggressive attitude. No daft running moments in this one. When he strides down a riot-filled street, there's no-one laughing for long. My complaint about the first film having muscled out the hero in favour of an over-the-top villain would, you'd have thought, been tripled here. But it is not the case, at all. I don't know how he achieved it with this four-way extravaganza, but Burton allows each participant just enough screen time to enhance their presence and enjoy their role with power, wit and grace. Not once does the film feel over-crowded. Keaton also finds time to expand on the Bruce Wayne side of things, too - which was another area I had problems with earlier - providing the playboy much more gravitas and bearing. He proves himself a fighter when opposed to Shreck's plans, and a thoughtful saviour with regards to his flirting with the enigmatic, re-vamped Selina Kyle. The masked ball sequence, when Bruce and Selina discover one another's secret - a great touch here being that neither of them is actually wearing a mask - ranks as an all-time classic. Burton, Keaton and Pfeiffer nail this crucial, and a little controversial, moment with tremendous subtlety, raising the hidden emotions up to perfection. Selina's fragility and on-the-edge unpredictability gets me every time, and there's a degree of tragedy and fate that encapsulates decades of comic-book narrative and lore in literally the expressions on just two people's faces. Exquisite. Despite its stark visual sheen, the evil in Batman Returns is never black and white. Morals are corrupted, virtue is lost, but deep down there is a sense of a certain clinging to innocence that is thought-provoking, poignant and bittersweet. Only Shreck is bad to the core - with his super-slick machinations, back-stabbing duplicity and cool-eye for self-preservation, even at the expense of his own jock-cum-nerd son, Chip.

But before we all get maudlin and assume that the movie is just plain depressing, let's remember that no-one makes darkness as spectacular as Tim Burton. His direction of action this time around, exhibits a confidence he lacked previously and, for that matter, ever since. Now Batman's duels are sly and brutal, each punch a devastating knock-out, his agility far greater and his desire to inflict pain almost enough to make Christian Bale proud. Witness the numerous head-butts - one even delivered to Catwoman! I mean, how could he? She's a woman! But just have a gander at that amazing side-kick she slams into his gut from a feral crouch. Yep, there's a delicious intensity to the scraps this time that blows away anything that Kilmer or Clooney could manage. The brawling might not have the pulverising, dirty, no-holds-barred grit of Batman Begins, but at least you can see the blows and the kicks being dished out. And, of course, let's not forget that, in this grand outing, the Bat actually kills, too. Holy homicide, Batman! And about time, too. He even seems to enjoy it. Just look at the smirk beneath the cowl when the big clown discovers that he's been wired to blow. And who didn't cheer when the fire-breathing Devil got roasted by Bat-flame? The sense of chaos on the streets when Penguin's Red Triangle Gang of carnival nutjobs goes on the rampage is giddy and gleeful - all the fun and fear of the circus, folks. Those skeleton-headed bikers are so cool too, as is the grenade-toting little dog playing Frisbee with Batman's new smart-Batarang.

“I believe the word you're looking for is ... Aaaarghhhh!”

The late Anton Furst may not have worked on this film, but his spirit has certainly lingered with the look and feel of this new wintry Gotham. Gargoyles project from baroque buildings, gargantuan sets enclose structures both grand and dismal, the limbo-land between reality and myth, in which Gotham is situated, coming across as beguiling as it is unsettling. Many cite the first movie in the series as gothic, myself included, but it is here in Returns, that the label truly fits. The darkness pervading all trapped within this hyper-drama is decadent, rich and sensuous, a sly and festering ever-presence that becomes a character in its own right. The vast subterranean lair for the Penguin, the fanciful rooftop dalliances and, naturally, the fabulous Batcave all exude a spiky air of sinister gloom. And, matching this, Danny Elfman's hugely operatic score skilfully weaves in all the new themes around his ultra-iconic hero cue for Batman, perfectly lending the film an astonishing aural landscape that befits this ghoulish fairytale. For, in essence, that is what makes Burton's Batman so alluring. It's a uniquely visionary take on the violent adult fairytale. Innocence lost, masked heroes and monsters, sex and death, all intermingled in one smouldering cauldron, with an added dash of good old fable and social satire to spice it up. We all know how I prefer the realism of a Batman that could exist - a la Batman Begins - but the thing that the Dark Knight has over many other superheroes is the fact that he can be interpreted in lots of distinct, and different, ways. Burton and Keaton mastered the dark, expressionist and frightening version that worked so wonderfully in the horror-themed comics of the 70's and 80's, whilst Schumacher's attacked the overt flamboyance of the Bat's more garish and kid-friendly guise (and not-too successfully, I might add). Bale and Nolan's spin is right for now, with its emphatic, pull-no-punches vigilante stance. But returning to this Batman has been a celebration for me. I had forgotten how good this one was.

His beginning was awesome. But the Bat's return was sheer, unadulterated class. Burton's finest hour.