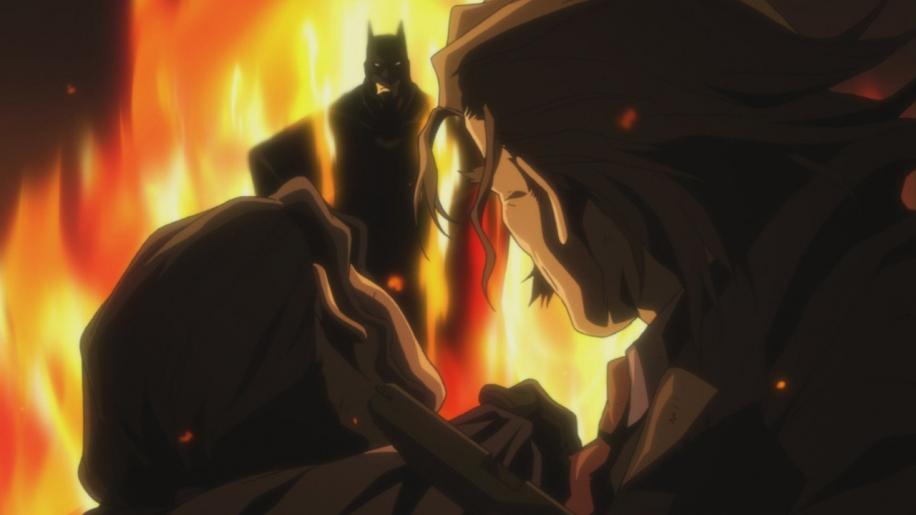 With The Dark Knight riding high at the UK cinemas and looking destined to become the greatest Batman film of all time, thus far, to mark its release Warner Premier released the Animatirx inspired Batman: Gotham Knight. It follows a very similar format in that the film comprises of six separate chapters or segments each written and directed by a different creative team but each with a tenuous overriding arc and continuity between themselves and Chris Nolan's Batman Begins.

Starting off with “Have I got a story for you” which is set very soon after Batman's appearance; he is still an enigma and the story looks at how the innocent, in this case children, view the emergence of the Dark Knight. Three kids tell their story of how they perceive the Bat as he fights some unknown 'flying robber' mistaking his gadgets and fighting prowess as some form of supernatural or cybernetic enhancements. They view him as some sort of avenging 'devil' rather than angel; only when the dust settles do they begin to see, and the 'truth' becomes known. Stylistically the artwork for this episode feels very rough, almost childlike in its simplicity for colouring, characterisation and backgrounds, perhaps chosen to amplify the childlike eyes that are viewing Batman.

Following this is “Crossfire” during which the creative team turn their eyes from children towards the police and how they perceive the Bat, in particular Jim Gordon's Crime Unit. Given the job of returning a criminal to Arkam, detectives Ramirez and Allen argue about the relative merits, or otherwise, of having Batman around. In particularly well thought out arguments Ramirez considers her place and actions now that the Bat is around to 'help' juxtaposed with Allen's unwavering “He's a vigilante” retort. Once again it takes the dust to settle for any truth, however grey, to be told. In probably my favourite episode here the style is very much light and shadow; it is far more adult particularly in its depiction of violence and the way Batman dishes it out. Such bold colouring against such deep blacks give a real sense of depth to the frame and the rich story telling brings out the adult nature of the Bat.

During “Field Test” The Bat turns his attention to ease the bloodshed being wrought by the rival gang leaders shooting it out in Crossfire. Knowing that Batman abhors guns, Lucius Fox gives a very young looking Bruce Wayne a device to deflect bullets that fits inside his utility belt. During the ensuing fight a deflection causes an (all too obvious) outcome leaving Batman no choice but to walk alone. Stylistically this episode is extremely bright, check out the greens of the golf course, and whist the characters are well realised I felt Bruce was way too young. However the story ethic is pretty good; another, albeit low-key, facet as to why Batman never carries or uses a gun. This episode brings to a close this short arc.

Moving on to “In Darkness Dwells” a dark and brooding tale seeing the Bat stalking the Croc in Gotham's underbelly, becoming infected with Scarecrows fear virus but still managing to escape to the light. Having become more accustomed to Batman's methods, Gordon is willing to let him give chase in the sewers but keep in radio contact. And the Bats single determination to see justice done drives him to keep going despite his injury accepting neither help nor thanks once the job is done. Certainly the darkest of the tales on offer here, Bat's grim determination to win no matter the odds are a stark reminder how fractured he really is. Stylistically this is a horrible picture, grimy, grainy and odd colouring, of which I discuss more in the picture section, but as a choice to mirror the picture match the grimness of the area and the determination is a bold one; once the infection hits things sink even further into distortion, again carrying on the vision through Bat's eyes. It's certainly the hardest episode to watch for this reason and maybe that too was a conscious choice, Batman faces hard decisions, why should we face any less when watching him go through his?

Carrying straight on from the above chapter, in a manor of speaking, Batman, gravely injured has flashbacks to India and his being taught how to ignore pain whilst trying to escape from the bowels of the city. The stark contrast between the filth of the under-city against the beauty of the Indian gardens drive home the choices Bruce Wayne made in his quest for vengeance. And his choices are put to the test when he defends his teacher, even against her will and she too realises his inevitable destiny, there is simply no fixing what refuses to mend. A flashback episode to explore how Batman copes with the pain of his existence, both physical and mental, is pretty standard stuff but is presented well and delves into a part of his life I'm not sure has been looked into before. Stylistically is decent animation the dark and light of the sewers and India are both brooding and lush. Again the violence is lent more credence than one would normally have given a 'cartoon', Batman's injury and pain as he fights to get out are really tangible.

The final episode “Deadshot” whose link with the previous is merely a box of pistols, sees the titular assassin Deadshot hired to take on his greatest project yet.... The ensuing battle between Deadshot and Batman is a real clash of the ethics, Deadshot, of course uses a gun, never misses and is the worlds top assassin, Batman, refuses to use a gun and is sworn to protection. Harking back a little to the third episode, he no longer has the protection afforded by the gyro thus his only defence against bullets is speed, agility and sheer nerve; something that Deadshot does not have; checkout his whimpering when cornered. It's a fitting conclusion to the series, having explored deeper facets of the Bat's psyche an ending on a classic 'good' versus 'evil' dust up completes with satisfaction. Stylistically it is bold colouring and deep blacks, backgrounds are well seen and the characterisation is typically how you would expect the Bat to look.

As individual episodes, each segment is complete, although short there is a definite story thrust; however when combined their linking is extremely tenuous, this give a rather disjointed feel to the whole. This is not helped by the style adopted for each, the almost childlike animation for episode one and the dirty/off colour choices for episode four make these episodes stand out from the 'norm'. Each episode does its best to delve a little into the Bat's ideology and even with their short runtime they do manage it, but perhaps a better approach might have been to have a stronger overall story arc, still keeping the stylised episodic format, and thus giving the benefit of bringing everything together as a cohesive whole. As it stands Gotham Knight is a bold attempt that ultimately fails right at the last hurdle. That is not to say the film isn't enjoyable, there is a deal of merit to it and parts do look and sound terrific. Also there are parts that are very adult in nature, you will notice that it has a UK 15 certificate, giving serious pointers as to where the creative teams felt Batman is heading. Ultimately though I feel it missed its mark which is a shame, but I hope this does not discourage any more involvement, because a mature Batman is what we all want to see.