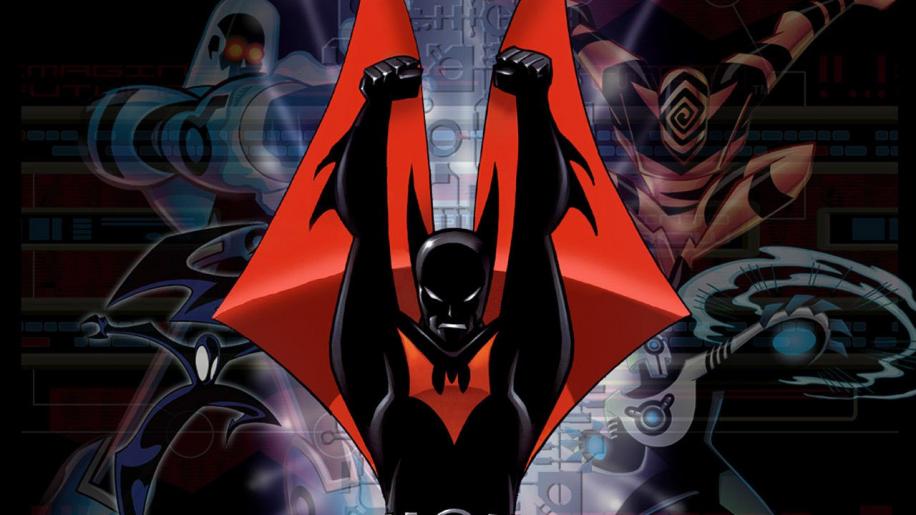 This show really isn't that old, yet the print served up here is little shaky. It looks dirty and sort of muted and there is damage, in the form of pops, nicks and scratches, throughout most episodes. Colours can be great, or they can appear drained and the image looks, well ... dry, for lack of better word. When explosions are called for they are usually nice and bright and vibrant, and reds always look very striking. Perhaps too striking, though, as occasionally there was some slight smearing and little over-saturation. That said, the red-hued glimpses inside the cockpit of the Batmobile look quite splendid. Blacks are reasonable without, perhaps, being as deep or as strong as we'd like. Sometimes the image seems quite muddy and old, which I find unusual as the older Animated Series often looked much warmer and cleaner.

There are a few judders here and there, too. Edges, whilst not that sharp, are still well-handled, and fast-action is only marginally hampered by jagged stabs of motion drag. The episode Spellbound, in particular, has a poor picture during some scenes, when the image loses contrast stability and becomes far too soft and bright.

So, not brilliant ... but still very watchable. Big screens will suffer the most. We get a 2-channel Dolby Digital stereo mix that does exactly what it says on the tin, without being too flash or elaborate. The depth across the speakers isn't too great, but the force at which the track is flung out at you is quite effective. Dialogue is sharp and clear and there is a pounding presence to the guitar-led score. The separation across the front is lacking in detail, though. We get some effort at directionality but it is mainly ambience - such as street and crowd sounds, the wind or weight added to some crashing structure - that extends the soundfield. It is not disappointing, given the medium it was designed for, and certainly has some energy and power to it. Well, you didn't really expect much, did you?

We get Commentary Tracks over two episodes - Rebirth Part One and Shriek. The show's creators Bruce Timm, Paul Dini, Alan Burnett, Glen Murakami and Curt Geda talk over the first one, regarding how the show came about and how they were going to strike out in a new direction whilst still adhering to the known mythology. They mention cuts that had to be made, point out some nice colour changes, do a fair bit of animator back-slapping and all agree on how they over-estimated the size of cell-phones in the future! There's some nice talk about the eye-catching title sequence - the bits that looked CG were actually toys or maquettes filmed in somebody's kitchen. The second Commentary sees Paul Dini replaced by Stan Berkowitz, but carries on in much the same vein. The guys are having fun watching the show and they have some smart and amusing anecdotes to tell, but twenty minutes with a few people reminiscing just seems like a waste of time. There isn't really that much you can learn about the background to the show's production from such a short running time. Surely, once the group have come together, they can chat over a couple more episodes and go a little more in-depth? However, for Shriek there is a nice relevant mention of the influence of Fritz Lang's vintage thriller M on how they attempted to emulate the richness of its sound design for their own show. Not bad, then ... just not enough of it.

Music Of The Knight offers a 57 second introduction from Bruce Timm before we are offered a selection of Score-Only Scenes from certain episodes. We get tracks from Meltdown, Dead Man's Hand, Disappearing Inque and two from Spellbound. Yep, the music is nice and atmospheric ... right up until moment when the guitars rip their way in.

Inside Batman Beyond (9.35 mins) is a group discussion about the genesis and ideas that went into the creation of the show, featuring input from Bruce Timm, Alan Burnett, Glen Murakami and Paul Dini. Folks, despite some briefly interesting factoids bandied about the forum, this little feature is ruined by the moderator, Jason Hillhouse, who acts just like some swivel-necked idiot caught up in the middle of them. You will never watch this piece again.

Finally, we get some Trailers for DC Comics Kids, Justice League, Batman Beyond and HotWheels Breaking Point. Not as polished, nor as engrossing as the original Animated Series, Batman Beyond is still a very enjoyable show. But it is not Batman. The style is not as beguiling and the new roster of rogues nowhere near as intimidating. The idea was for a more kid-friendly show, but in losing the dark psychology of the original, the creators lost the vital spark that gave Batman the edge over every other animated series. That said though, the show would go on to gain momentum and integrity as it progressed. It is still nice to have - and for Bat-freaks like me, it is obviously essential - but season one is still clearly finding its feet with regards to theme and character.

The discs aren't exactly the best quality, either. And the extras are of a once-only interest but, as usual with this genre, it is the shows themselves that we want.