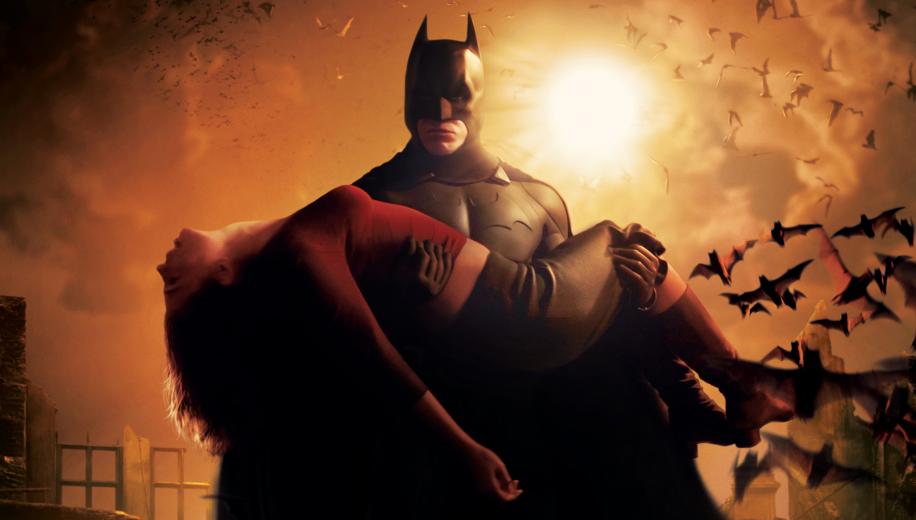 Looking back, it was a hell of an achievement after Batman & Robin, turning a character who had become something of a joke not wholly unlike his 60s incarnation into a viable and iconic anti-hero, bursting into the superhero scene with a grounded look at a man who dresses as a bat, and captivating audiences young and old with a gritty crime drama origin story, which arguably set the bar for superhero origin stories. Christian Bale made for an excellent Bruce Wayne and a great Batman, with Nolan bringing his usual supporting cast to play - Michael Caine making for a great, down-to-earth, Alfred, as well as Cillian Murphy as a scary Scarecrow, with a misdirection cameo for Ken Watanabe - as well as offering fuel for Gary Oldman's comeback in the form of Jim Gordon, a pre-Taken look at Liam Neeson kicking ass and, of course, the ever-reliable Morgan Freeman.
It's an ensemble cast, but it's Nolan's - and Bale's - baby, finely-tuning the flashback-centric dip into the events that changed the course of young Bruce Wayne's life, and his work to become Batman, taking a hell of a lot of material from the excellent Frank Miller comic Batman: Year One and fashioning it into a pulsing, brooding animal of a superhero movie, hard-edged and gritty (so much so that even audiences averse to traditional superhero flicks embraced it), with a fabulous visual aesthetic and a brutal heartbeat of a score from Hans Zimmer. Long before the monolith that is the Marvel Cinematic Universe redefined money-making superhero blockbusters for all time, Nolan's Batman saga proved their potential as thrillers for grown-ups as well as kids, setting a dark tone and delivering such a high standard of work that DC has never been able to step out of the shadow of his Bat.

Shot on 35mm film, and framed in the original theatrical aspect ratio of 2.40:1 widescreen, Batman Begins is not only part of the recent spate of Nolan films released on Ultra HD Blu-ray, but part of its own Dark Knight Trilogy. All of the Nolan releases have been delivered under the supervision of the director himself, overseeing the 4K scans and colour timing, and the results are quite varied, with the latest films, Interstellar and Dunkirk looking the best, the increasing amount of IMAX footage used across his films standing out as superior to anything else, and some of his earlier 35mm only features, lensed by Award-Winning cinematographer Wally Pfister, struggling somewhat to compete with the later fare.

Certainly it's hard to dispute the fact that the films have all been given an upgrade here, and in particular on the Dark Knight Trilogy, where there have been distinct problems with previous iterations, but those expecting the first entry - Batman Begins - to stand out may end up being somewhat disappointing. What is clear from this new native 4K scan is that it largely sorts out the multitude of flaws associated with the now decade-old standard Blu-ray release, cleaning up the image, balancing the contrast and removing any signs of black crush or banding. What it can't do, unfortunately, is change the original source cinematography, with the 35mm footage appearing very filmlike but also slightly soft around the edges (c.f. Inception), and more-so in some sequences than others. Overall though, it's a balanced image with far fewer flaws and thus should be celebrated as not only an improvement, but as an engaging way to enjoy this fantastic film.


A great upgrade, but the end result is still not demo

Detail is sporadically spectacular, generally very good, and fleetingly disappointing, affording the close ups with a loving observation of skin textures, pores and hair, whilst mid range shots bring the Blade Runner-inspired scenery to life with rich detail, as the HDR implementation works overtime to bring more shadow detail to the fore than ever before. Black levels are impressive - it's a very dark picture, but intentionally so - and remain strong and rich throughout, even if they're of that lighter variety that Nolan/Pfister favour rather than the inky abyssal blacks that some fans would ideally have preferred.

Skin colours are still a smidge off, slightly pinker than necessary, but nothing like the bronzed Inception look, and overall WCG implementation is far more subtle than the HDR, the latter of which really makes a difference to the shadow detail. It's a great upgrade, but that's partly due to the fact that the earlier Blu-ray was just so problematic and, whilst it erases most of those problems, the end result is still not demo territory.

Although this is yet another Nolan release where fans were crying out for an immersive HD audio upgrade, the newly-minted DTS-HD Master Audio 5.1 track really is excellent in its own right, although, to be fair, the original Dolby TrueHD 5.1 track was pretty spectacular, and it is hard to tell the difference - if indeed there is any.

Dialogue remains firmly prioritised across the frontal array, retaining clarity and coherence throughout, and prominence where necessary, but it's Zimmer's seminal score that broods and ignites the array, whilst the effects deliver the goods at every stage. Right from the opening beat, Zimmer redefines Batman with surefooted intensity, as his theme gives LFE weight to the piece that will leave your living room on distinctly shaky territory. And it never lets up either, with the action sequences not only rich with precision effects and engaging atmospherics, but also some heavyweight elements of their own - the sure highlight being the Tumbler, which is so damn loud it'll leaving you reaching for the volume control and then thinking again and just getting absorbed in the sheer grin-inducing joy of the low-end rumble of the engine. It's an excellent track, with or without Dolby Atmos.

As with all of the other Nolan releases on Ultra HD Blu-ray, Batman Begins relegates all of its extras to the accompanying Blu-ray discs, differentiating itself from most of the other Nolan Blu-rays in this selection by having a rare Picture-in-Picture track - complete with behind the scenes footage and interview snippets with all of the main cast - but still largely Featurette-based in its main body.


A largely featurette-based set of extras

There are eight Featurettes, including the introduction to this reboot in Genesis of the Bat; the casting with Batman: The Journey Begins; Path to Discovery looking at the Iceland shoot; Saving Gotham City focusing on the action sequences using practical effects; Shaping Body and Mind seeing Bale transform into Batman; Gotham City Rises looking at the set design; Cape and Cowl detailing the Batsuit; and Batman: The Tumbler exploring the superb new Batmobile. A MTV spoof short film Tankman, a Gallery, some Trailers and a Preview for The Dark Knight, featuring the superior opening sequence, round out the solid package.

Whilst Nolan's Dark Knight Trilogy didn't reach its zenith until the series' own The Empire Strikes Back, the masterpiece that is The Dark Knight, Batman Begins was still a hell of a reboot, given what had come before, redefining the iconic character for generations to come and easily becoming the definitive interpretation.

Released on Ultra HD Blu-ray as part of The Dark Knight Trilogy, Nolan's seminal Batman Begins benefits from a native 4K image that fixes almost all of the problems that the flawed preceding Blu-ray was plagued with, and leaves the film looking better than ever before, but it's still far from perfect. The audio track, on the other hand, is almost impossible to fault, and with a strong selection of extras, this is the definitive release for the definitive Batman franchise.