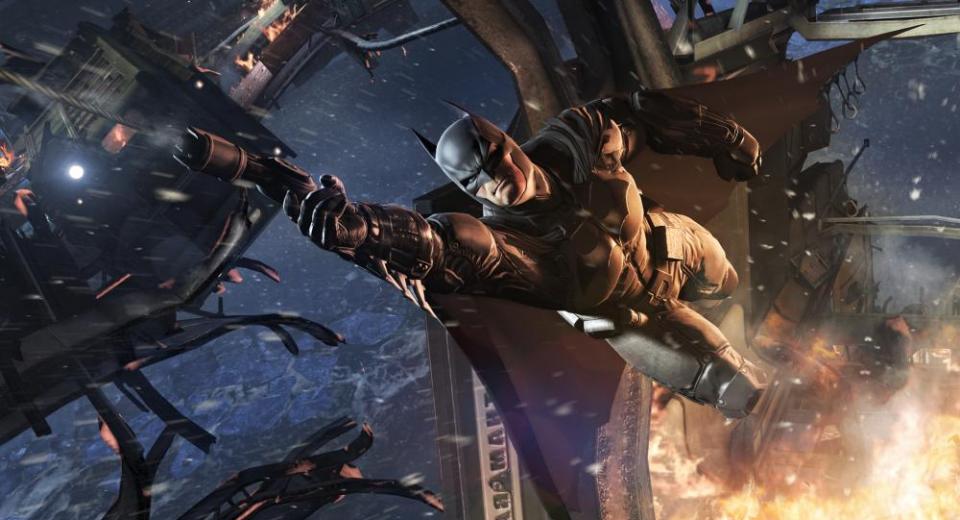 It's been a long night. Batman stands atop Pioneer Bridge, all scuffed armour and torn cape. Arkham stretches out into the horizon. No-one on the streets is innocent: criminals loiter in small gangs, the patrolling police are universally corrupt.

Down below, half a dozen men are chatting about the balance of power in Arkham's criminal underworld. One of them carries a gun. The Dark Knight singles him out, swooping and soaring steadily through the night sky before landing a double-footed kick square in his target's back. Barely pausing for breath, he leaps ten feet and plants his palm forcefully in the face of a second adversary. A third thug attempts to blindside him, but Batman blocks the punch without so much as turning his head, and floors the attacker with a flick of his forearm. Of course, all this will be familiar to anyone who's played either of Arkham Origins' predecessors. Rocksteady's combat system is a simple but bewitching blend of rhythm gameplay and QTEs. The mechanics are arguably one of the biggest successes of the outgoing generation.

However, unlike Asylum and City, Arkham Origins isn't a Rocksteady game. WB Games Montreal have taken the reins and unfortunately for bat-fans, they prove themselves incapable of delivering anywhere near the same level of polish.

In the Arkham titles anything other than a fluid, flawless victory feels like failure.

The developer’s lack of attention to detail is exemplified under Pioneer Bridge, where three enemies are down and three are left standing. Rather than launching himself at the fourth, Batman inexplicably swings at thin air. Of course, he recovers soon enough and despatches the remaining baddies, but in the Arkham titles anything other than a fluid, flawless victory feels like failure.

Arkham Origins' story and characterisation is similarly unrefined. Contrary to what you may infer from the title, Origins is actually set a couple of years after Batman's first appearance. If the plot is to be thought of as an origin story at all, it is perhaps the origin of the Arkham series, or the origin of the relationship between Batman and The Joker.

In the opening scenes it is revealed that Black Mask has put a $50m bounty on Batman's head, which has attracted eight assassins. This opens the door for an array of lesser enemies from the DC franchise to make an appearance but Origins only really comes to life when Batman and The Joker share the stage.

For this outing, voice actors Kevin Conroy and Mark Hamill are replaced by Roger Craig Smith and Troy Baker, who deliver solid performances despite the mediocre script. Troy Baker's Joker is particularly menacing, and a couple of extreme close-ups of the character's face are up there with the most crazed and sinister portrayals of The Joker ever seen. The city itself is disappointing. The map is small and poorly designed. Grappling and swinging through the city is awkward, with far too many inaccessible ledges. Buildings are spaced at unintuitive distances from one another, and frequently interrupt Batman's rhythm.

The streets are oddly deserted, populated only with enemies. The developers attempt to justify this by setting the game on Christmas Eve, and every now and then reminding us that residents have been asked to stay in their homes, but it feels wrong. And with no civilians in sight, who is Batman protecting? If anything, Arkham feels like a city without its hero, a city already lost to criminals and crooked cops.

The opportunity to show us a young Batman learning his trade is wasted. In fact, the portrayal of the Dark Knight here differs very little from the other Arkham games. There's a CBBC-level character arc overlaid on the narrative that amounts to little more than a broody loner having to learn to trust his friends, but little else of interest.

RPG elements return in the form of inscrutable skill trees that offer an overwhelming number of undesirable rewards. I would have happily ignored the shambles all together if it wasn't for the regular 'Level Up!' message plastered across the screen that could only be dismissed by upgrading something, which towards the end I mostly did at random. The gameplay is still broadly split into combat, predator and detective sections. There’s a new spin on the latter element that makes use of Batman’s Detective Vision to reconstruct crime scenes. Batman can move time forwards and back, watching events unfold as they happened. It’s superficially interesting but in practice it amounts to little more than clicking on red markers in the environment.

This by-the-numbers approach pervades the Origins experience. Both the predator and combat areas carried forward from the previous games suffer from inferior environments. Later in the game, the number of enemies thrown at Batman is ramped up ridiculously, but that doesn't make it any more fun - especially when more often than not there’s some misplaced obstacle or glitch to disrupt the flow of the action.

Exploring the city reveals a range of side-quests and Enigma puzzles, but I found it hard to maintain an interest as the game progressed, and my enthusiasm was chipped away by the title’s many issues.


The third game in the Arkham franchise represents a significant step back for the series.

The occasional moment of imprecision in a third person action game would be entirely forgivable, but in Origins barely minutes will pass without some immersion-breaking glitch or oddity. The camera is a mess, collision detection is often wonky and the Deathstroke boss fight is one of the worst I've ever played. Worse still, the game crashed on multiple occasions and suffered from frequent frame rate drops. It’s really not good enough.

Origins features a spectacularly appalling tacked-on multiplayer. Eight players are split into three teams: three fighting for the Joker, three for Bane and Batman and Robin trying to take them all down. If you’re one of Joker or Bane’s men, the game plays as a really, really clunky shooter. Playing as one of the dynamic duo is more fun, but as you’ve only a one in four chance of being drawn as either of them, so most of the time you’re stuck with a thug. To be perfectly honest, I barely lasted an hour on Origins’ multiplayer and I have no intention of ever going back.

The opportunity to build on the foundations of its predecessors and make use of 70-odd years of lore was thrown away by WB Games Montreal. Instead, the third game in the Arkham franchise represents a significant step back for the series. The new additions are mostly ill-conceived, the multiplayer is truly awful, and the experience is plagued by glitches and crashes.

In short, Origins plays more like a cheap knock-off than the latest entry into one of the finest series of the generation. One to miss.