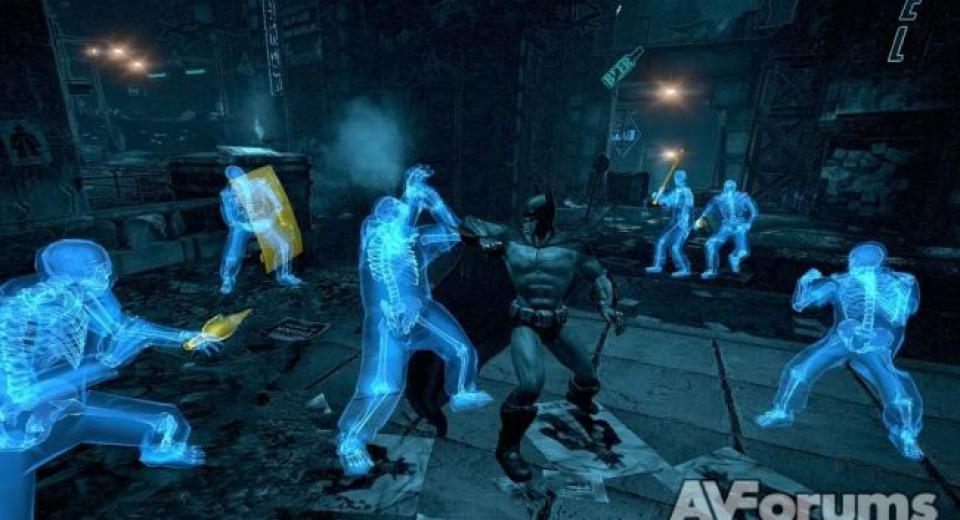 To date, something like two dozen Batman games have been produced. Most of them weren’t any good. But that’s no surprise because most superhero games aren’t any good. Let’s have some fun listing terrible superhero games of the last few years: Superman Returns, Iron Man, Thor... ugh. Don’t get me started on Thor. I still have nightmares.

But then there was Batman: Arkham Asylum, which came along and, to use the technical jargon of the trade, totally nailed it. Combining puzzle-solving detective work with elegant combat and a predatory stealth mode, Rocksteady succeeded in making the player actually feel like Batman. Throw into the mix the meticulous detail of the characters and the top-notch voice work from stars of the much-loved animated series, and you’ve got the definitive Batman title.

So here’s the sequel, which has been hyped to the moon and back by the gaming press. The set-up goes like this: Quincy Sharp, mayor of Gotham, creates a super-prison called Arkham City by cordoning off a section of the slums. Hugo Strange is in charge, and is the nominal primary antagonist. But as areas of Arkham City are loyal to different Batman villains, you’ll confront a number of well-known faces as the plot develops.

Sadly, many favourites are gone no sooner than they’ve arrived, and it made me a little sentimental for that rigid focus that Arkham Asylum had on Batman vs the Joker. Mark Hamill does return though, and he gives another memorable performance as the Clown Prince of Crime, a welcome contrast to the personality vacuum that is Batman. Arkham Asylum’s more-or-less linear path has been replaced by Arkham City’s open world environment, which comes with pros and cons. There’s a ton of sidequests and collectibles to find. Completionists beware, you’ll be sacrificing many, many hours if you want to 100% this game.

But cohesion and pacing suffer as a result of how much has been thrown into this, particularly early on. And with such a wealth of content, some weighting in the value of sidequests would have been useful as there’s nothing to push you to embark on one rather than another.

This disrupts the sense of urgency that is central to the plot. Without going into spoilers, the narrative is structured around some things happening at a certain time, a kind of ticking bomb scenario. The countdowns aren’t in real time though - it’s no Dead Rising - so you’ll be notified of how long is left via trigger points in the main missions. In other words, you could be seriously running out of time until [spoiler] happens, but merrily gallivant around doing whatever you want in between story missions, defeating the tension in the narrative.

These criticisms of structure are partially addressed as the game progresses, or at least they become less relevant as you’re sucked into the action. From the halfway point the story begins to take shape, and the last hour is perfectly crafted and a hell of a lot of fun. I should add that if you dive back into the New Game+ option for a second playthrough, those early sections are much more enjoyable as you’ll know what you’re supposed to be doing.

Controlling Batman as he glides around the perma-night of this dense, urban, neon-lit environment is utterly thrilling. Some gameplay tweaks enable easier navigation while in the air: you can dive and rise up again to maintain altitude and the line launcher now allows you to fire a second line in mid-air.

Generally, the core mechanics of Arkham City build on the fundamentals laid down in Arkham Asylum. You begin with most of the equipment that you accumulated in the original game, and a few new gadgets are added to the utility belt as the game progresses. Straight-up combat is distinguished from other third-person brawlers by its distinctive rhythm element. In some ways, it’s closer to a dynamic take on Guitar Hero than the God of War model, in that timing is crucial. If you get it right, Batman will dance around his foes, striking one, before launching himself at another and disarming a third. Get it wrong, and you’ll mis-step, and leave the Dark Knight vulnerable to attack.

Compared with Arkham Asylum, there’s something a little more frantic about Arkham City’s fight sequences, as you can now be attacked by multiple enemies simultaneously. While this serves to make combat look more spectacular than it did in the original, it doesn’t always feel quite so controlled. But the subtle changes to the animations and a greater variety of enemies more than compensate for this.

Other situations force you to take a more measured approach. You’ll enter an area and stealthily pick enemies off one by one. The environment is used in much the same way as the original game: Batman can perch on high, hide under floor grates, pull enemies off ledges, and so on. Inmates are better equipped than they were in Arkham Asylum. For example, some are able to interfere with your detective mode or use heat sensors to see you when you hide in the shadows. These sections are superbly crafted, patient affairs punctuated by sudden flurries of violent takedowns - in other words, exactly what you’d want from playing as Batman. You could argue that the accompanying score is slightly too up-tempo for the mood of these scenes, but that’s a minor quibble.

The ‘detective’ element of the game remains intact, and is emphasised as being an essential part of Batman’s character - just as any fan of the Dark Knight would hope. You’ll follow blood trails and heat signatures across Arkham City to track down your foes. Many of these segments are based on the kind of hot/cold model, you’ll be presented with a number that changes as you get nearer your destination.

Boss battles are hugely improved from Arkham Asylum. Each boss requires a different approach, and there’s much more to it than just pummelling and dodging. A couple of fights are particularly memorable for the variety of strategies you’ll need to employ throughout the confrontation.

Catwoman is available day-one DLC via a bundled online pass. Rocksteady have impressively distinguished her style from Batman. She controls very similarly to the Dark Knight, but as you’d imagine she’s a lot more nimble in combat. The key difference in gameplay mechanics is her ability to climb walls and crawl along ceilings. Sadly, her missions crop up at irregular and often ill-considered moments in the main Batman plot, and I couldn’t escape the feeling they were a bit tacked-on. Had I known in advance, and if I weren’t reviewing the game, I would have skipped playing the missions all together.

To say Catwoman is hypersexualised is an understatement. While a conversation she has with Poison Ivy probably gives Arkham City a pass on the Bechdel test (in short: Are there at least two women who have a conversation about something other than men?) and there’s little doubt that Selina Kyle is an empowered woman, it’s difficult to see those positives as more than a side-product of a character presented to suit a male fantasy. And when a subsequent female character is first introduced by a shot of her backside and breasts, you start to think that perhaps there’s an agenda. I think developers can do better than this. But let’s go back a few steps. To even get to play as Catwoman, you’ll need an online pass to download her missions. Each new copy of Arkham City has one included. Her missions make up around ten percent of the main game, and are worth an additional 150 achievement points on the Xbox 360.

Currently, a little under 25% of UK households don’t have an internet connection - that’s over 5.5m residences. Anyone living in one of those homes who decides to buy Arkham City new will not have access to the Catwoman missions, despite having paid for them.

If you buy the game used, you’ll likely have to stump up around £8 for the unlock code. Choose not to, and you’ll lose one-tenth of the single player story.

The argument for a publisher to earn money from resale of a multiplayer game is shaky, but for a one-player game it’s frankly outrageous. They sell the product, they earn the cash. What happens with the game after that is figuratively and literally not their business, especially as no additional resource is required on their part to support the product once it changes hands.

It’s also worth noting that Warner Bros. have already had to comment after receiving a number of complaints that customer’s codes weren’t working, or were missing entirely (not to mention corrupt/vanishing save files). Here's a lesson: If you’re going to treat your customers with such utter disdain, the least you can do is ensure the system from which you’re shamelessly profiteering actually works. For what it’s worth, they seem to lay the blame with Microsoft and Sony. I would suggest the person who had the original idea is the one at fault.

As appalling as all that is, it’s important to separate how the title has been sold from the game itself.

There’s no denying that this is a lovingly crafted game. The care that Rocksteady have taken developing the characters and setting shines through, even in the darkened streets of Arkham City. The mechanics have all been improved upon, and the open world is a joy to glide around. Throw into the mix all the extras (including the ever-fun challenge rooms) and it’s clear that there’s no shortage of replay value. Arkham City might not have the tight narrative of its predecessor, but it compensates by improving almost every other respect. Easily one of the best action games of 2011.

Arkham City sees Batman unleashed from the linear paths of Arkham Asylum to a landmark-packed open world that seems to have been designed, above all, to please the Dark Knight’s fans. But what you gain in freedom you lose in structure, and this sequel lacks the tight narrative focus of the original. That said, Rocksteady’s gameplay tweaks add an extra layer of excitement and polish, and once the story gathers pace all the elements come together in an immensely satisfying conclusion.