There is very little to criticise 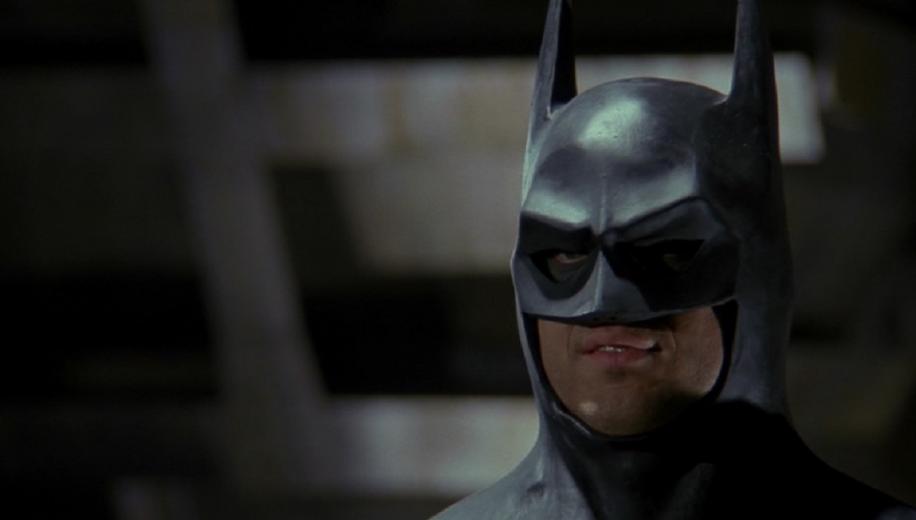 I have given a name to my pain, and it is Batman

It cannot be underestimated how much current comic book movies owe to Tim Burton’s 1989 Batman. Donner had made waves over a decade earlier with Superman, but all the goodwill that that film had gained was eroded away by the paltry fourth outing, and indeed Batman, the character, was still being seen the world over in its 60’s TV guise. It took the comics to really give the character a boost; Frank Miller’s Year One and Dark Knight Returns removed all traces of camp, and placed Batman into a dark universe concentrating on the duality and despair of what is, let’s face it, a pretty messed up individual. Following on from these, director Tim Burton, himself a denizen of the dark, took the Batman character towards the shadows, and with it set up a cinematic legacy whose resonance is still being felt today – DC is still dark!

The narrative of the film is essentially two origin stories, that of Batman and the main antagonist, the Joker. It did draw some flak at the time by changing Batman's own origin by having the killer of his parents tie into the villain's origin but, in the flow of the film, this actually works quite well. With Batman's traumatic birth out of the way, the film actually centres on The Joker, driven by Jack Nicholson’s outlandish performance which manages to be more than just Nicholson behind a painted grin, showing seething menace and deranged mentality while being genuinely funny. Indeed, it is his presence in the film that really gives the whole endeavour some gravitas. The casting of Michael Keaton in the titular role also drew criticism, but looking back he did manage to give some duality to the nature of the beast, this would be much better developed in the sequel, but here he maintains good composure in both sides of the character. Adding in the likes of Kim Basinger and Jack Palance added further weight to the acting calibre.

The set design was suitably gothic, indeed Gotham has never looked so good as it does here, the huge sets built at the Pinewood studios really give the film some scope, while the cinematography is wonderful. Danny Elfman’s score has become iconic and, for some, is definitive. It was a near perfect storm, and quite violent, don’t forget both Joker and Batman actually kill in this film. The non-specific time setting feels closer to the origins of the comics and gives the clothing and gadgets a realistic turn and it suits the film. There is very little to criticise and it looks and sounds great and still stands up today. Batman was shot using Panaflex cameras on 35mm film and has recently been cleaned-up and scanned at 4K the result of which has been used for this Ultra HD Blu-ray release. The disc presents a native 3840 x 2160p resolution image in the widescreen 1.85:1 aspect ratio, and uses 10-bit video depth, a Wide Colour Gamut (WCG), High Dynamic Range (HDR10) and is encoded using the HEVC (H.265) codec. We reviewed the Region free UK Ultra HD Blu-ray release of Batman on a Panasonic 65DX902B Ultra HD 4K TV with a Panasonic DMP-UB400 Ultra HD Blu-ray player.

The new scan is a revelation! Detail is amazing, from the monolithic designs of Gotham, to the ornate coverings in Wayne Manor, from skin texture to Batman’s gadgets, from clothing weaves to newspaper print – everything is clean and precise despite the overall soft(ish) nature of the original source. When you take into account the WCG and HDR the image really comes alive.

Colours, when used, are bright and vibrant; the purple of Joker’s suit, and the oranges of the explosions; but what really stood out was the reds and greens, notable on both the ribbons on the gift presented to Vicki, and on Joker’s toy-like walkie-talkie in the climax – see how bright and defiant they are. Flesh tones are natural enough while blues are cool, the slight colour timing alterations notwithstanding.

The film has always been dark, and that has been preserved, but now it is DARK but with so much going on in the shadows (check out when Joker first appears and confronts Grissom), the black level is awesome, check out the Batcave, the plastic factory or the nighttime streets in Gotham – there is so much frame depth. The white scale is just as good, with keen highlights; the brightness of the searchlights, the sparks and explosions during the destruction of the plastic factory are quite blinding; and Joker’s skin is palpable.

The original source is clean and without issue, there are no compression issues and the grain level is pleasing and organic and adds to the feel of the piece. A stunning upgrade. The same can be said for the remixed Dolby Atmos surround track which really opens up the sound stage. Of course, the action sequences fare best; the destruction of the plastic factory with explosions and debris scattering around the room, the bell falling down the tower and the opening shootout all exhibit some stunning sound design with clear layering and separation in the mix. But subtler moments fare just as well, the water drips and bats chirping in the Batcave, the street noise, crowds, steam, Prince’s music playing during the first scene or the reverberation of voices and footfalls in the belfry all make use of the overhead channels, opening up the surround field.

Bass is deep and precise with plenty of LF effects to keep the sub happy and the neighbours awake, while dialogue is clean and clear and prioritised to the frontal array. Elman’s iconic score sounds stunning and makes full use of the surround environment, Prince’s contributions sound somewhat dated, but when used in the museum, are layered extremely well. This is a tremendous track! Blu-ray
Audio Commentary – As Above
Legends of the Dark Knight: The History of Batman – A 40 minute documentary that looks at the differing incarnations of Batman and how he has developed.
Shadows of the Bat – A feature-length documentary, split into three parts, that covers the making of the film.
Beyond Batman – Six features that cover different aspects of the film; titled: Visualizing Gotham: The Production Design of Batman, Building the Batmobile, Those Wonderful Toys: The Props & Gadgets of Batman, Designing the Batsuit, From Jack to the Joker and Nocturnal Overtures: The Music of Batman.
The Heroes and the Villains – Clips that cover the main cast: Bruce Wayne, Vicki Vale, Commissioner Gordon, Alexander Knox, Harvey Dent, The Joker, and The Goon,
Batman: The Complete Robin Storyboard Sequence – Sequence cut before filming.
On the Set with Bob Kane – Three minutes with the creator talking about the character and the film.
Music Videos - Batdance, Partyman, and Scandalous.
Theatrical Trailer

Sadly there is nothing new here, all extras having been available before and showing their age being both in SD and at 1.33:1 ratio, but is still relevant to the film. Tim Burton’s 1989 Batman had a lot to prove. With the decline of the Superman franchise as well as the perception of campy 60’s Batman still prevalent, it took a darker turn in the comics as well as a director and studio willing to follow that same path to bring about a monumental shift in the cinematic landscape; a shift that still resonates to this day. There's a slight twist to the origin story but because of some heavyweight acting talent, serious new designs, shadow bathed cinematography and an iconic score, Batman became a dark and brooding character, violent and relentless and set the path for superhero movies for decades.

As a 4K UHD set from Warner, this is a real winner; the native 4K picture is simply stunning, with plenty of detail, superb black levels and gorgeous colouring. This is perfectly matched by the Dolby Atmos surround track with is precise, all-encompassing, bass heavy and richly rewarding. The extras package is from previous generations (SD and in 1.33:1 aspect) but complement the film well.